Mustang Mach-E glides instead of growls into Colorado Springs 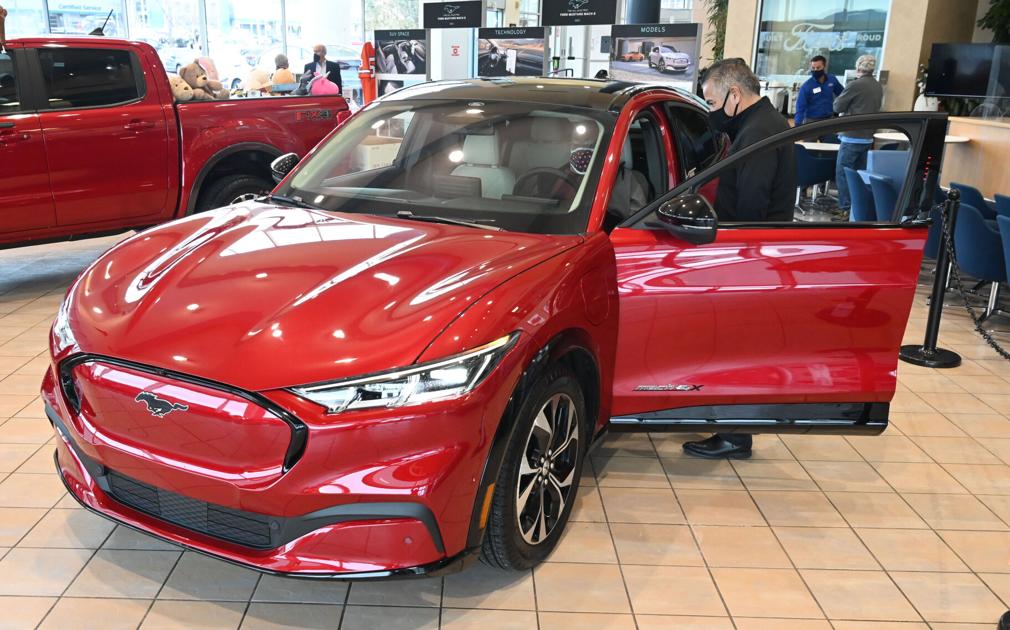 The growl is noticeably absent from Ford’s latest Mustang, but the electric Mach-E is no slouch when it comes to roaring down the street.

Ford Motor Co.’s zero-emissions version of its iconic sports car glided into town Monday and will be available for public viewing Tuesday at Phil Long Ford Dealerships in Motor City.

Auto shows being canceled this year because of COVID-19 is one reason Ford decided to take a mainstream electric vehicle to the masses through a nationwide tour, Joe Ziedonis, Ford product specialist, said Monday while showing off the car at the Phil Long Ford dealership at Chapel Hills.

Another reason is the high demand and anticipation for the Mach-E’s appearance, he said.

As with electric vehicles from other manufacturers, including Tesla, which recently opened a dealership in Colorado Springs’ Motor City, there’s a waiting list.

People who paid a deposit after the Mach-E was introduced in November 2019 at the Los Angeles Auto Show should start receiving their orders later this month, Ziedonis said.

He didn’t know when the vehicle will be on showroom floors.

Colorado Springs resident Ray Weis, who worked for Buick and Saturn before retiring, stopped by the Chapel Hills location to hear about all the bling, such as a coded push-button door entry replacing door handles, smart phone ignition activation instead of a key fob, a digital instrument cluster and a large, 15.4-inch center display screen with advanced information, including the nearest charging stations.

Weis is not sure he’s sold on all-electric power, though.

“I like the look of it, the features and the lines,” he said while checking out the car and getting an autograph from former Broncos player Randy Gradishar. “It’s a really nice-looking car.”

It’s not the beloved sports car; the Mach-E is a sport-utility vehicle.

However, “It has the same Mustang DNA,” said Kevin Shaughnessy, vice president of operations for Phil Long Dealerships.

The familiar snarl greets onlookers, the trio taillight design is all pony car and the body lines and fender haunches are reminiscent of what was declared the best-selling sports car on the planet in 2019.

The Mach-E comes in five editions, with different battery sizes and all-wheel-drive or two-wheel-drive choices.

Unlike gas-powered Mustangs, all Mach-Es have four doors, seat five passengers and reveal extra cargo space under the hood, where the motor normally sits.

Batteries are unseen, tucked underneath the floorboards, with a charge that lasts at least 300 miles on a rear-wheel configuration.

With power being delivered to the wheels immediately, the Mach-E GT bolts from 0 to 60 mph in 3.5 seconds, one second faster than the gas-powered 2020 Mustang, which goes from standing to 60 mph in 4.5 seconds.

Other Mach-Es take a little more time, like 4.8 seconds.

The Mach-E is not the first electric vehicle for Ford. An all-electric version of the Ranger debuted in the 1990s with fledgling battery development and available only for lease to fleet and government accounts, Shaughnessy said.

Ford also produced a fully electric Focus model up until a year ago. Other electric vehicles from Ford have been hybrid — part gas, part electric.

With new environmental requirements on manufacturers for increasing electric-vehicle production to reduce greenhouse gas emissions, expect more and more to be available on the general market.

“This marks the largest volume in Ford’s electrification of vehicles,” Shaughnessy said. “It’s the first step of Ford taking its most iconic brands and electrifying them.”

Because of COVID restrictions, people who want to see the Mach-E Tuesday at the Motor City Ford site are asked to sign up at https://cutt.ly/9hDRPEj.