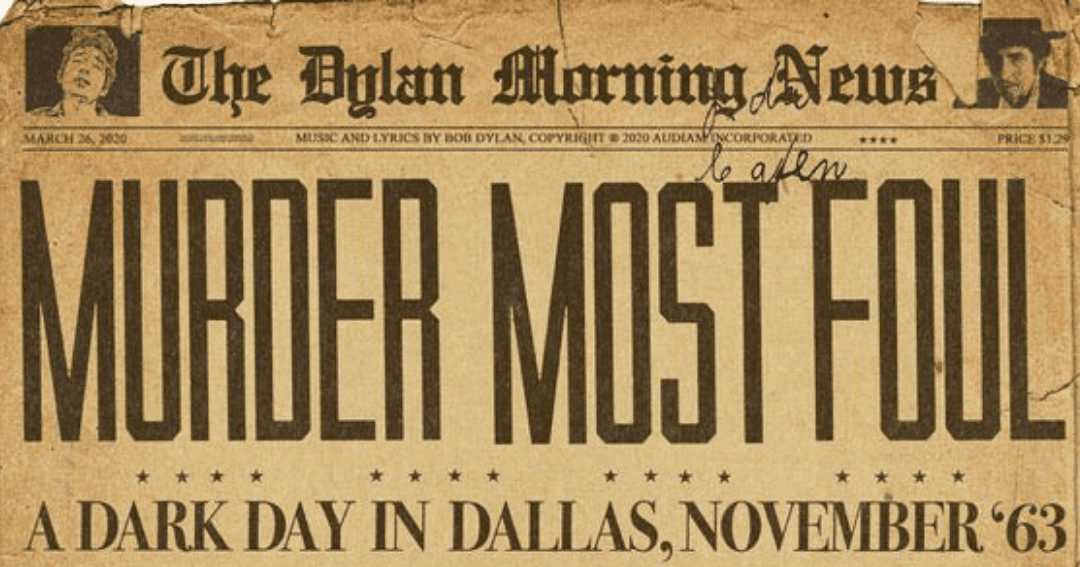 Bob Dylan’s new Rough and Rowdy Ways is his first album of original material in almost a decade. Since his time away, he has released a trilogy of covers albums, won a Noble Prize in Literature, and continued his Never Ending Tour. The pandemic stopped this summer’s tour, and during the beginning of the shutdowns, Dylan surprise-released what would end up becoming his first Billboard Number One, the 17-minute “Murder Most Foul” – the last song on his new album.

“Murder Most Foul” is based on the assassination of John F. Kennedy and is ostensibly a love-letter to radio and rock and roll. It also forms a terrific playlist, which we’ve shared here. In the song, Dylan references scores of other songs, arguably some of the best ever written, only to see the album end with the muted refrain of his own “Murder Most Foul.”

We begin the playlist right at the moment the narrator in the song makes a series of requests to immortal radio disk jockey Wolfman Jack, who plays them in an eerie dream sequence as JFK is taken to Parkland hospital, with John Lee Hooker, Guitar Slim, Don Henley, Pretty Boy Floyd, and dozens more in tow.

“Play me a song, Mr. Wolfman Jack,” Dylan sings. “Play it for me in my long Cadillac.” It was surely not lost on Dylan that Kennedy’s hearse was a 1964 Cadillac.

The whole of Rough and Rowdy Ways rings a bell to the glories of the past, from Jimmy Reed to Indiana Jones, to Julius Ceaser and everything in between. No icon – or iconic moment – is seemingly left unturned in the new album, including Altamont, Edgar Allen Poe, and the centerpiece of Dylan’s tribute; the president, himself, John F. Kennedy, who touched down on Love Field, in Dallas, to meet his terrible fate all those years ago.

We start the playlist song by song with 1958’s “Uranium Rock,” which contains the line:

“Well, I can see me now in my long Cadillac
Hinges in the middle, spare wheel on the back.”

There’s Beethoven (“play me number 9, and play me number 6”); “Lucille” from Little Richard; the Scottish “Dumbarton’s Drums”; and “Stella By Starlight” for Lady Macbeth. Like all things Dylan, it’s not always easy to pin down the source, which is why we go with Warren Zevon’s “Desperados Under The Eaves” who looks away “down Gower Avenue.”

At one point, Dylan sings: “Play Oscar Peterson, play Stan Getz. Play “Blue Sky,” play Dickey Betts.” It’s one of the great lines in the song, and gives us The Allman Brothers, coming out of “Mystery Train” from Little Junior Parker.

“Murder Most Foul” is based around a subject many of us consider the end of an era, but when listening to this playlist, it’s anything but. Among other things on this new album, Dylan gives us pause to remember some of the best music ever made. We hope the playlist gives you some good memories, too.