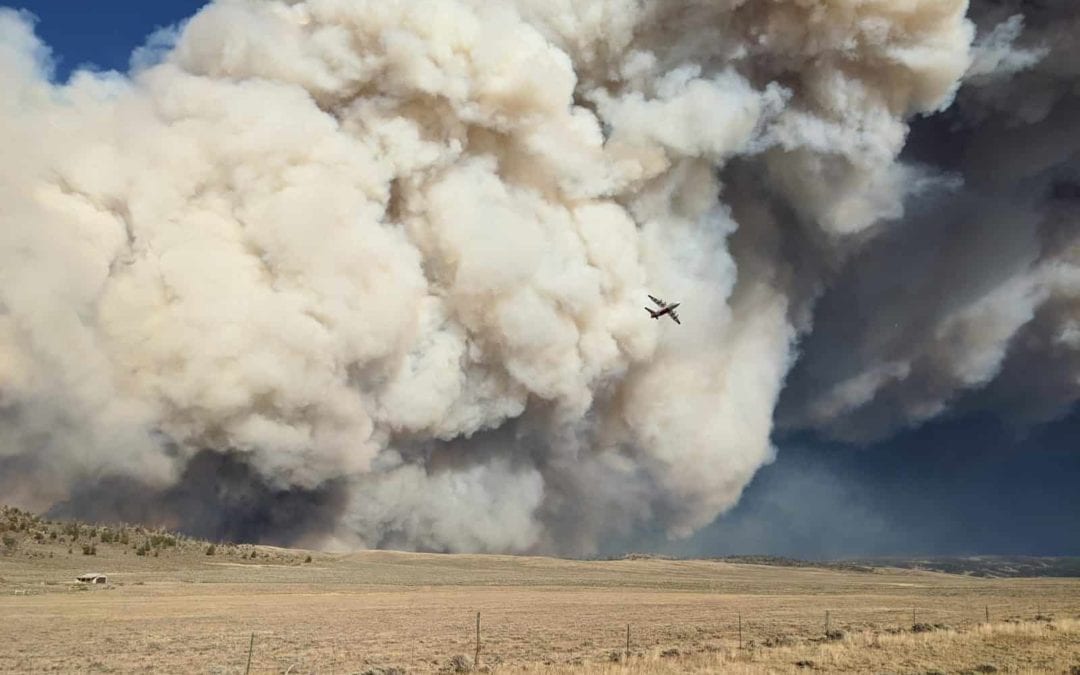 Energized by dry fuels and winds, the fire ran several miles in just under an hour and a half. Photo: Chip Redmond

The blaze is now at an estimated 117,240 acres, based on an infrared measurement just after midnight. A total of 934 are assigned to the incident.

Energized by dry fuels and winds, the fire ran several miles in just under an hour and a half. Crews were moved from other parts of the fire to assist with suppression efforts in response to the rapidly changing conditions. Yesterday’s extreme fire activity also prompted additional evacuations and road closures in both Wyoming and Colorado.

Last night, when winds were favorable to do so, firefighters conducted burnout operations to limit the fire’s spread by removing fuels along roads, fire lines, and natural features.

Burnout operations were conducted along WY230 between the Badger Creek Fire scar and the Colorado border—considered a key location where the fire could further advance southeast through Wyoming and into Larimer County, Colorado. Under favorable conditions, burning will continue today south to the junction of CO125.

West of Albany, a burnout south of the 500, 513 and 542 Roads began a control line to improve the defense of Albany, Keystone and areas east of Rob Roy Reservoir. Southeast of the fire, firefighters worked to interrupt the fire’s progression to the southeast, by burning out fuels on the west side of Wyoming Hwy 230/Colorado Hwy 127, on the Wyoming-Colorado border just southwest of Mountain Home and Wyocolo.

Additionally, firefighters worked throughout the night to prepare structures for possible impacts from fire, and defend homes in and near the fire footprint. Ongoing structure protection includes laying hoses, setting up sprinklers and portable pumps, and removing brush near structures to secure at-risk communities.

Firefighters don’t need donations, but you can still help

“We’ve been overwhelmed by the kindness and generosity of the many communities affected by the Mullen Fire. We want to reassure you all that our firefighters have everything they need, so we do not need any donations,” said a spokesperson on the Mullen Fire. “But your donations can be put to good use in many other ways.”

Sign up for our Buckrail Daily Newsletter to get today’s top local news stories delivered to your inbox.