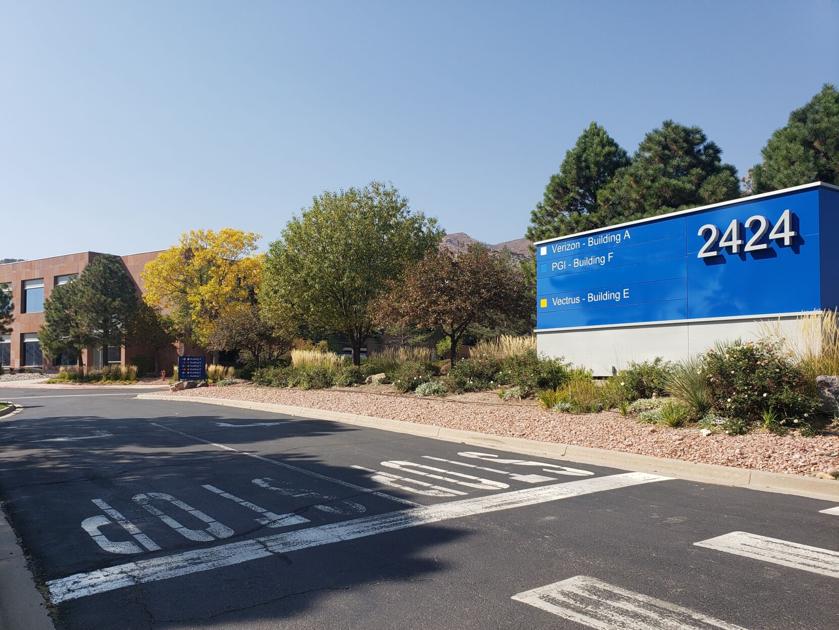 Developers have reduced the number of apartments proposed in western Colorado Springs on Garden of the Gods Road, but residents argue hundreds of new homes could still cause fatal traffic jams during a wildfire, loss of viewsheds and increased pressure on open space.

All of the apartments will be built on existing parking lots, Barlow said. The office complex has about 1,000 more parking spaces than the city requires, she said.

“We are proposing to develop already developed parcels,” she said

About 55 acres to the west of the office complex, including both ridgelines, would be donated to the city as open space, Barlow said.

A rendering of the apartment complexes planned for 2424 Garden of the Gods shows they would not impact the skyline, Andrea Barlow, a consultant for developers said.

Mountain Shadows residents came out in force against the proposal Thursday during a virtual meeting, as they did when it was first presented in October. A few residents invoked their experience trying to evacuate during the Waldo Canyon fire in 2012 and getting caught in their cars as the fire burned down the mountain and into the neighborhood.

“Those of us who lived through June 26, 2012, are fortunate that we did not die in our cars,” Ron Johnson said. Increasing density could make future evacuations even worse, residents said.

Residents also pointed out that the city has identified 30th Street is due for upgrades.

Colorado Springs Fire Marshal Brett Lacey acknowledge the roads were packed during the evacuation, but he said the city could never build enough roads to meet those concerns. Rather, residents should be aware of their risk during an emergency and leave before an official evacuation is ordered, he said.

A concept plan for 2424 Garden of the Gods shows the parcels in yellow that could become the future home of apartment complexes.

“I think it comes down to neighborhood awareness and preparedness,” he said.

City Traffic Engineer Todd Frisbie said improvements to 30th Street — adding shoulders and a roundabout at the entrance to the Garden of the Gods park — have been funded and construction is scheduled to start soon.

Residents also raised concerns that the planned buildings would block views of the Front Range and asked the developer to use balloons to demonstrate the impact on the skyline.

Barlow said such a demonstration would be impractical at this stage because not enough planning has been done. However, she did show a rendering demonstrating the apartment complexes would not block the ridgelines. The buildings would be 45 feet high or three stories, at most, she said.

The increased pressure on Garden of the Gods Park, which is already drawing 6 million visitors a year, was also a prime concern for the neighborhood. Resident Eddie Hurt was among those who could foresee “more gridlock, more overuse” at the park from the new residents.

The plans for the apartments are still in the early stages and the zoning change required must be approved by the Colorado Springs City Council, city planner Katelynn Wintz said.