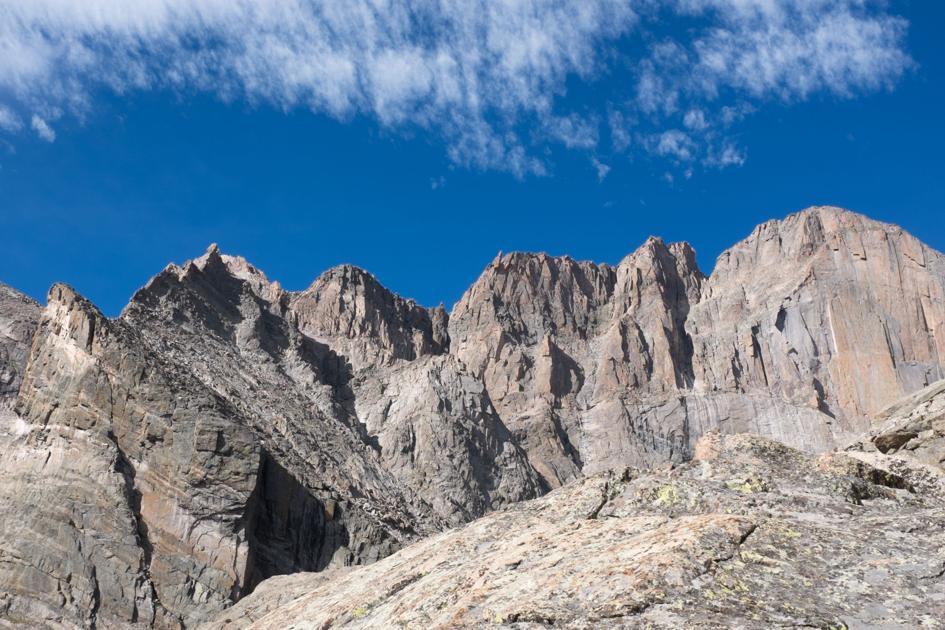 March is synonymous with college basketball and the annual tradition of filling out a bracket. As the tournament plays on, we imagine a fourteener fest, pitting some of the Colorado’s star peaks against each other (and, of course, some lower-altitude underdogs).

Which will triumph, and which will tumble? Let’s find out:

(1) Pikes Peak defeats (16) James Peak: Edwin James was the first to journal an ascent of what would be the mountain named for Zebulon Montgomery Pike. The naturalist is remembered by Gilpin County’s high point — but is quickly forgotten in this matchup.

(8) Mt. Lindsey def. (9) Spanish Peaks: The fabled “Breasts of the Earth” enter the competition together, but Lindsey is too mighty an opponent, showcasing the magic and thrill of the Sangre de Cristo Range.

(12) Cheyenne Mountain def. (5) Mt. Manitou: In a showdown of non-fourteeners, we see the Pikes Peak region’s other most recognizable mountains go head to head. The granite fortress of Cheyenne doesn’t fall easily — not even against the Incline’s legions.

(10) Humboldt Peak def. (7) Crestone Peak: The extreme Crestones get the hype, while Humboldt doesn’t nearly limit its visitors, welcoming Class 2 types to a breathtaking side of the Sangres.

(2) Crestone Needle def. (15) Culebra Peak: One requires a fee. The other requires serious mettle, granting a sense of accomplishment that money can’t buy.

(1) Pikes def. (8) Lindsey: You don’t see any doughnuts being fried on Lindsey.

(2) Crestone Needle def. (10) Humboldt: Humboldt was able to surpass one notorious Crestone, but not another.

(2) Crestone Needle def. (6) Blanca: The road ends for Blanca, a road riddled with some of Colorado’s most ominous peaks.

(1) Pikes def. (2) Crestone Needle: Inspired by Katharine Lee Bates’ view at 14,115 feet, “America the Beautiful” is to credit for the moniker “America’s Mountain.” But another patriotic line comes to mind after this win against a formidable foe: “… that our flag was still there …”

(8) La Plata Peak def. (9) Mt. Belford: La Plata has the benefit of broad shoulders, a wide mountaintop on which to space from other parties, plus the vaunted Ellingwood Ridge, not for the average peak bagger.

(12) Mt. Shavano def. (5) Mt. of the Holy Cross: A divine pairing between one promontory celebrated for its snowy cross and another lesser known for its resident angel. Shavano pulls off the upset due to Holy Cross’ burdensome descent requiring almost another 1,000 feet of elevation gain.

(13) Mt. Oxford def. (4) Mt. Princeton: Despite its mesmerizing view over the Arkansas River Valley, Princeton goes down to Oxford, which might seem a modest foe. But add the ability to link two other fourteeners (Belford and Missouri) in one big push, and Oxford is no pushover.

(11) Missouri Mountain def. (6) Mt. Yale: While Yale gets more buzz, it turns out to be a tight duel, with distance, vertical gain and Class 2 stretches fairly similar on the standard routes. Crowds are more prone to follow the paved road to Yale’s trailhead, so Missouri gets the edge with solitude.

(3) Mt. Harvard def. (14) Mt. Columbia: The two connected by a long saddle get their long-awaited bout. Harvard, the state’s third highest point, shows who is boss.

(10) Mt. Antero def. (7) Quandary Peak: The most trampled mountain of them all from the Tenmile Range gets the invite to this part of the bracket. Antero well represents the Sawatch’s proud ruggedness.

(2) Mt. Massive def. (15) Tabeguache Peak: Massive is out to show he is more than just Elbert’s little brother.

(12) Shavano def. (13) Oxford: Only an angel could be responsible for this miraculous run.

(3) Harvard def. (11) Missouri: It wasn’t the Ivy League clash anticipated with Yale getting beat. Harvard shows Missouri why it has no place among the Collegiate Peaks.

(2) Massive def. (10) Antero: That obnoxious sound of Jeeps and ATVs on the busy road up Antero? That’s the sound of defeat.

(2) Massive def. (3) Harvard: The stage is set for a rivalry matchup, old as the 19th-century mining days, when Massive fans were known to stack rocks atop its summit to surpass Elbert’s height.

(2) Massive def. (1) Elbert: The U.S. Forest Service official assigned to Colorado fourteeners has told us that, of all 54, Massive is her favorite. For personal reasons, yes. But also for the fragrant, stream-fed forests, enchanting meadows and sweeping views.

(1) Mt. Sneffels defeats (16) Sunshine Peak: It’s tough to determine a ruler in this wild, spectacular region, but Sneffels might just be it. She is, after all, regarded as the Queen of the San Juans.

(8) Eolus Peak def. (9) North Eolus: How do these sister peaks in the remote Chicago Basin separate themselves? By honoring their namesake Greek god of wind, of course. Eolus is taller.

(5) Wilson Peak def. (12) Redcloud Peak: Wilson Peak is a Colorado classic, with a variety of rock-defined approaches rising up its stately face.

(13) El Diente Peak def. (4) Mt Wilson: Wilson Peak’s neighbors, commonly traversed via a hair-raising ridge, are different for their lack of prominence. But unranked El Diente demands respect for its unique knob of a summit. Attaining it is a notch in a climber’s belt.

(11) Grand Mesa def. (6) Sunlight Peak: The mesa is one of a kind, the world’s largest flattop mountain boasting vast adventure.

(10) Handies Peak def. (7) Windom Peak: It’s a rough trip to the trailheads in either home basin, American and Chicago. But from American Basin, it’s a friendlier, more accessible trek to Handies — closer to 6 miles round trip, about half that of Windom’s slog.

(1) Sneffels def. (8) Eolus: While Eolus might be difficult to pick out in its jagged conglomerate, Sneffels is unmistakable, like a soaring cathedral seen all around southwest Colorado.

(5) Wilson Peak def. (13) El Diente: It seems offensive to seed Wilson Peak fifth, but that’s how it shakes out in what we’d say is the most majestic region in the field.

(11) Grand Mesa def. (3) Wetterhorn: The mesa gets another nod for its access. Its scenic byway is a must-drive for fall colors.

(11) Grand Mesa def. (2) Uncompahgre: The valiant run of the Grand Mesa continues, bolstered by nearly 500 square miles of lakes, meadows and forests home to an abundance of wildlife.

(11) Grand Mesa def. (5) Wilson Peak: So a tabletop claims victory in this astonishingly vertical region. It seems unlikely. But then again, while its neighbors draw comparisons to European wilds, the Grand Mesa is beyond comparison.

(1) Maroon Bells defeats (16) Mt. Bross: The most photographed fourteener vs. the least photographed? The pressure is on, but the icon wins.

(8) Grays Peak def. (9) Torreys Peak: In the twin battle, the winner is decided by history. While both botanists left indelible marks, the record shows Asa Gray actually summited his namesake, while John Torrey admired from afar.

(5) Mt. Bierstadt def. (12) Mt. Democrat: Both are responsible for many first fourteener memories. The difference: Democrat often gets lost in popular descriptions of “Decalibron,” the widely trafficked circuit combining Cameron, Lincoln and Bross.

(6) Pyramid Peak def. (11) Mt. Lincoln: Living up to its name, Pyramid has a stark beauty that is hard to contend with, even for the mountain with another lofty title.

(3) Capitol Peak def. (14) Mt. Sherman: Capitol avoids the upset with a knife edge that cuts to the core of even the boldest alpinist.

(7) Castle Peak def. (10) Snowmass Mountain: Two within the fearsome Elk Range face off. While Snowmass is considered more dangerous, the regal Castle commands the greatest reaches of the notorious complex.

(2) Longs Peak def. (15) Mt. Meeker: Meeker is second to Longs across Rocky Mountain National Park’s skyline — and Longs might be second to none in all of Colorado.

(1) Maroon Bells def. (8) Grays: Maroon and North Maroon peaks are technical, harrowing journeys, much unlike the newbie grounds of Grays and Torreys.

(4) Evans def. (5) Bierstadt: In this challenge between Front Range favorites, Evans wins for its namesake wilderness, where there’s plenty of room for serenity.

(3) Capitol def. (6) Pyramid: Impressive as Pyramid is, it’s lowly among fourteeners, achieving the category by fewer than 20 feet.

(2) Longs def. (1) Maroon Bells: A juggernaut quarterfinal decided by the Bells’ fatal flaw: the unrelenting masses that flock for the photo.

(1) Pikes Peak def. (2) Mt. Massive: Pikes’ storied nature powers it along — as does the alternate personality of Devil’s Playground, the opposite route of Barr Trail with surprises of its own.