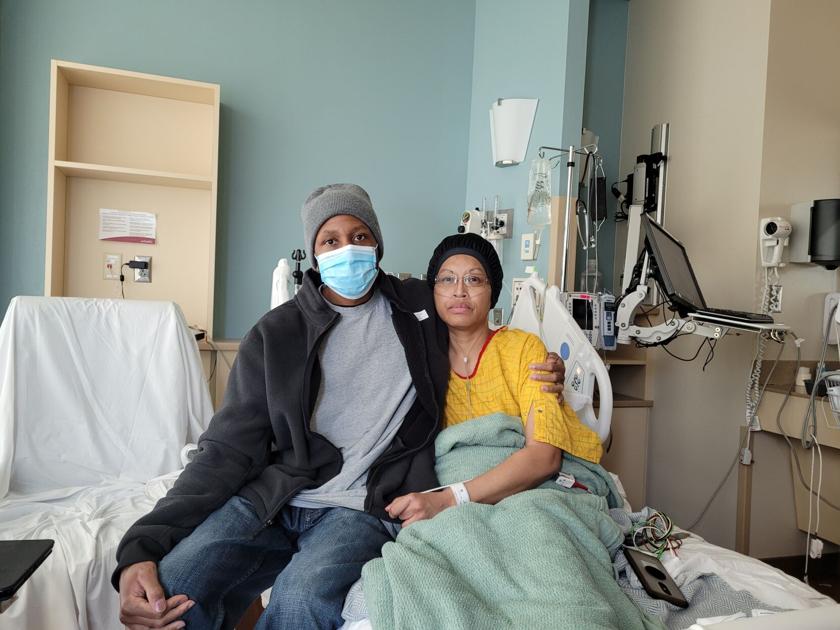 Beatrice Pope didn’t have strong feelings about the coronavirus vaccine a month ago. After 13 days in the hospital and suffering a partially collapsed lung, she sounds passionate about prevention.

“I am going to be the first one in line when I get better,” she said from her hospital bed at UCHealth Memorial Central, where she is recovering.

Pope, 48, most likely got the coronavirus from her husband, David Pope, who suspects he got it at the retail store where he works. He remembers helping a customer who was not wearing a mask and coughed on him. David got sick a few days later at the end of March.

Beatrice, who had no underlying health conditions, started to feel sick around April 1 and went to the emergency room because she couldn’t breathe seven days later. She was sent home with oxygen to help with her pneumonia on both lungs. But her health continued to decline.

She had to be admitted April 16 and it was later discovered her left lower lung had collapsed, she said. While hospitalized she’s had low blood pressure that has left her feeling faint.

While she is on the mend and hopes to go home Thursday, she wishes she had gotten vaccinated earlier.

“I really seriously regret not doing it … This is horrible,” she said.

Pope is among a growing number of coronavirus patients getting admitted to hospitals in the Pikes Peak region and around the state who are under 60, said Cary Vogrin, a UCHealth hospital spokeswoman.

The rise in hospitalizations and cases may be driven by highly transmissible variants of the virus, and the relaxation of social distancing rules in public places including bars and restaurants, said Colorado College Professor Phoebe Lostroh, who has a Ph.D. in microbiology from Harvard University.

El Paso County didn’t replace state capacity limits that lapsed this month as the state turned control over to local governments. Hewitt said it was likely too soon to judge the impact of relaxed rules.

The trend toward younger, hospitalized coronavirus patients is clear.

At the same time, the total number of people getting vaccinated dipped last week by 25%, or about 10,000 patients compared to week prior, while the percentage of people testing positive for coronavirus has ticked up from about 7% last week to about 8.25%, El Paso County Health data show.

More highly transmissible COVID-19 variants account for more than 80% of disease in Colorado, according to the Centers for Disease Control and Prevention. The B.1.1.7 variant, discovered in Britain, accounts for the largest proportion of disease statewide at 60%.

El Paso County Public Health epidemiologist Fadi Youkhana said during a Board of Health meeting Wednesday he was concerned about the low vaccination rates among younger residents, particularly those under 30, where about 90,000 people remain unvaccinated, he said. A county graph of vaccinations by age group as of Saturday showed just over 21% of those under 30 and about 33% of 30-to-39-year-olds were vaccinated.

To reach herd immunity and to achieve the countywide goal to inoculate 75% of the local population with at least one dose of vaccine by July 4, younger people between ages 20 and 39 need to be vaccinated, Youkhana said.

Nearly 42% of county residents have received at least one dose of vaccine, while 29% are fully vaccinated, according to county statistics.

“We haven’t had enough vaccinations yet that we can expect it to slow down the spread of the virus very much,” Lostroh said. “When pediatric vaccinations become available for children and young teens, that could help.”

The county has more than 100 locations offering vaccines and is starting to use vans and buses to bring vaccinations to people, Hewitt said. Several providers are now offering walk-in appointments as well as morning and evening hours to better accommodate work schedules, she said.

To curb the spread, Lostroh said she would like to see more uniform restrictions implemented locally. During a tour of vaccination sites and businesses in Colorado Springs last week, Gov. Jared Polis called on residents to take “personal responsibility,” urging caution as they flocked back to restaurants and other businesses.

“What we’ve seen is that leaving it up to people for themselves is not working,” Lostroh said.

Hewitt did not say whether the county would implement additional restrictions for events and businesses if local COVID-19 statistics continued rising. Businesses can require or encourage prevention measures such as wearing masks, she said.

Under the state’s latest health order, the mask mandate is extended through mid-May and the Colorado Department of Public Health and Environment can require additional restrictions if a county’s hospitalizations exceed 85% of hospital or hospital capacity.

As for Beatrice Pope, many of her family members have also gotten ill with the virus, although not as seriously, and it’s changed their perspective as well. The family’s plan had been to sit back and let others get the vaccinations, but not anymore, she said.

“Everybody is running to get their shots,” she said.

A list of El Paso County of vaccine locations can be found at elpasocountyhealth.org/how-can-i-get-a-vaccine