More than 60% of Colorado counties, most residents should wear masks under new CDC guidance 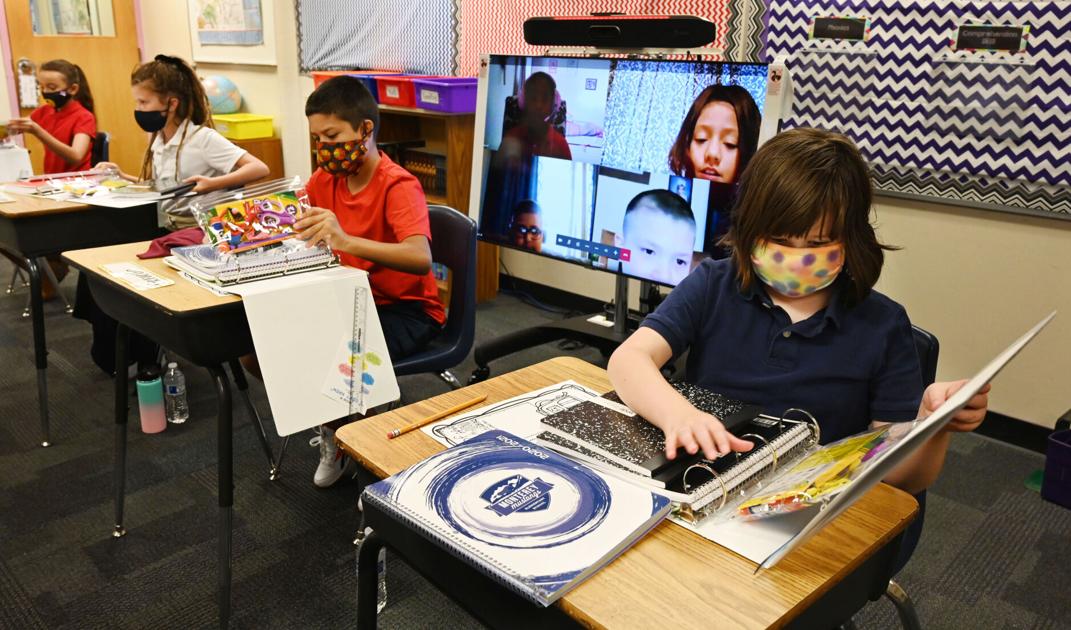 More than 60% of Colorado’s counties, including the entire Denver metro and El Paso County, should begin masking indoors again under new guidance issued by the federal government Tuesday amid a nationwide surge in COVID-19 cases.

The guidance from the Centers for Disease Control and Prevention recommend masking in counties with at least 50 new cases per 100,000 over the past week. Nationally, that’s more than 60% of all counties. In Colorado, it includes the entirety of the Denver metro area. It also includes every county west of Denver save for 11. The counties include all of the state’s major population areas: The 13 most populous counties would all fall into the guidance to increase masking, with the streak broken by La Plata.

In all, well over 80% of the state’s residents should be wearing masks under the CDC’s guidance. Sixteen counties — all but Cheyenne west of Denver — have at least double the masking threshold set out by the health agency.

Asked if Colorado would adopt the new guidance, a spokesperson for the state Department of Public Health and Environment said in an email that officials “are reviewing this new guidance from the CDC.” The state has previously based various policy changes on guidance from the federal government, including on masking in schools.

The delta variant has surged nationwide and now accounts for more than 90% of new infections in Colorado, a Denver health official said last week. COVID-19 numbers statewide and in Denver have begun to tick upward in recent weeks. They remain well below peaks seen in spring 2021, fall 2020 and spring 2020. But they’re a reversal of weeks of steady decline, despite a statewide vaccination rate that’s ticking over 70%.

The CDC also recommended Tuesday that teachers, staff, students and visitors to schools wear masks indoors, regardless of vaccination status. Colorado’s guidance for returning to school recommends unvaccinated individuals be masked, but it stops short of requiring any mitigation specifically. It left those decisions up to the local authorities.

American Federation of Teachers President Randi Weingarten praised the new CDC mask guidance in a statement, saying it was needed “to deal with the changing realities of virus transmission.”

She called it “a necessary precaution until children under 12 can receive a COVID vaccine and more Americans over 12 get vaccinated.”

The new guidance follows recent decisions in Los Angeles and St. Louis to revert to indoor mask mandates amid a spike in COVID-19 cases and hospitalizations that have been especially bad in the South. The country is averaging more than 57,000 cases a day and 24,000 COVID-19 hospitalizations.

The data emerged over the last couple of days from 100 samples. It is unpublished, and the CDC has not released it. But “it is concerning enough that we feel like we have to act,” Walensky said.

This March 6, 2020, file photo shows the headquarters for Centers for Disease Control and Prevention in Atlanta. The nation’s top health agency is expected to backpedal on its masking guidelines and recommend that even vaccinated people wear masks indoors in parts of the U.S. where the coronavirus is surging, according to a federal official who spoke on condition of anonymity because the official was not authorized to release the data. The Centers for Disease Control and Prevention is expected to make an announcement Tuesday, July 27, 2021.

Vaccinated people “have the potential to spread that virus to others,” she said.

For much of the pandemic, the CDC advised Americans to wear masks outdoors if they were within 6 feet of one another.

Then in April, as vaccination rates rose sharply, the agency eased its guidelines on the wearing of masks outdoors, saying that fully vaccinated Americans no longer needed to cover their faces unless they were in a big crowd of strangers. In May, the guidance was eased further for fully vaccinated people, allowing them to stop wearing masks outdoors in crowds and in most indoor settings.

The guidance still called for wearing masks in crowded indoor settings like buses, planes, hospitals, prisons and homeless shelters, but it cleared the way for reopening workplaces and other venues.

Subsequent CDC guidance said fully vaccinated people no longer needed to wear masks at summer camps or at schools, either.

For months, COVID cases, deaths and hospitalizations were falling steadily, but those trends began to change at the beginning of the summer as the delta variant, a mutated and more transmissible version of the virus, began to spread widely, especially in areas with lower vaccination rates.

“That is their job. Their job is to look at evolving information, evolving data, an evolving historic pandemic and provide guidance to the American public,” Psaki said.

“What has not changed,” she added, “is the fact that people who are vaccinated have a huge deal of protection from serious illness, from hospitalization and from death.”

But those experts were also critical, noting that there was no call for Americans to document their vaccination status, which created an honor system. Unvaccinated people who did not want to wear masks in the first place saw it as an opportunity to do what they wanted, they said.

“If all the unvaccinated people were responsible and wore mask indoors, we would not be seeing this surge,” said Dr. Ali Khan, a former CDC disease investigator who now is dean of the University of Nebraska’s College of Public Health.

“It was completely foreseeable that when they (the CDC) made their announcement, masking would no longer be the norm, and that’s exactly what’s happened,” Gostin said.

The CDC may be seen as “flip-flopping,” he said, because there’s been no widely recognized change in the science, he said. Furthermore, it’s not likely to change the behavior of the people who most need to wear masks.

“I don’t think you can effectively walk that back,” he said.

Ken Thigpen, a retired respiratory therapist who now works for a medical device manufacturer, is fully vaccinated and stopped wearing his mask in public after the CDC changed its guidance in May. But he started to reconsider in the last week after his job took him to hospitals in Mississippi, Louisiana, Alabama and Florida, where he witnessed medical centers getting inundated with COVID-19 patients.

“That delta variant is intense. It is so transmissible that we have to do something to tamp it down,” he said.

“I loved it when I could call the hospitals and they said, ‘We actually closed our COVID ward today or we are down to two COVID patients,’” he recalled. “And now we are opening the wards back up, and the numbers are going nuts.”