More than 1,000 descend on Colorado Capitol to protest stay-at-home orders 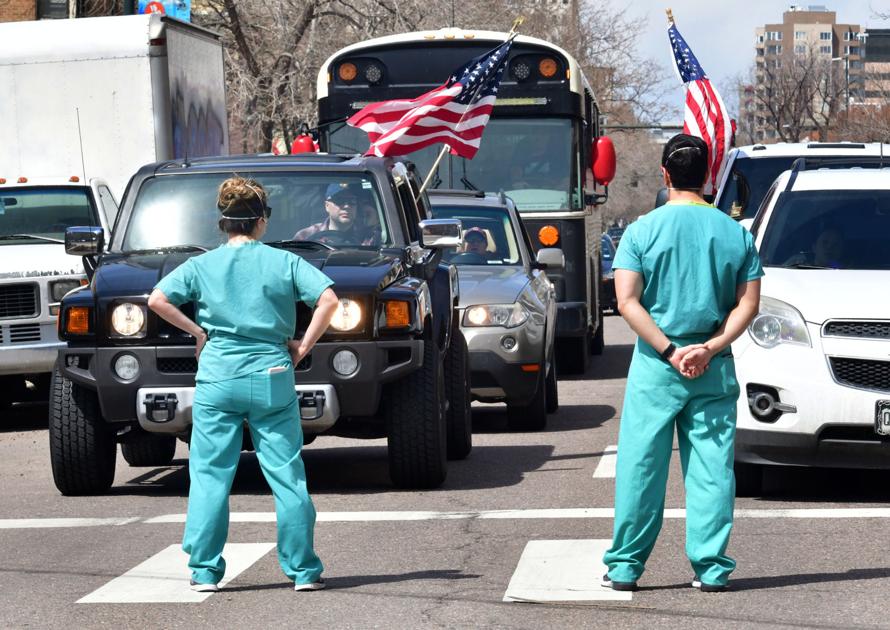 DENVER —About 1,000 sign- and flag-waving protesters on Sunday denounced stay-at-home orders and shutdowns of nonessential businesses that Coloradans have been adhering to for the past month to slow down the spread of the highly contagious coronavirus.

While a few hundred protesters gathered on the lawn of the state Capitol, mostly ignoring social distancing, cars, trucks, bicycles and even a man on horseback on Lincoln Avenue circled around the Capitol for more than two hours Sunday afternoon to show their support for ending the restrictions and allowing businesses to reopen and letting people go back to work. It was among about a dozen held nationwide in the past few days.

A horseback rider guides his mount between vehicles stopped at a traffic light on Lincoln Avenue during a car protest against the stay-at-home order issued by Colorado Gov. Jared Polis to stem the spread of the new coronavirus Sunday, April 19, 2020, in Denver.

A spokeswoman for Gov. Jared Polis issued a statement saying he shared their sentiment, but wasn’t prepared to lift the stay-at-home order in effect until at least April 26.

“Coloradans have a First Amendment right to protest and to free speech, and the governor hopes that they are using social distancing and staying safe,” the state said. “No one wants to reopen Colorado businesses and lift these restrictions more than the governor, but in order to do that, Coloradans have to stay home as much as possible during this critical period, wear masks and wash their hands regularly to slow the spread of this deadly virus.”

Reopening Colorado was the main them of protesters participating at the Colorado State Capitol for “Operation Gridlock”. The organizers of the rally asked those attending to stay in their cars to protest and follow social distancing to be safe. But a large crowd gathered on the lawn of the capital, many not wearing masks on Sunday, April 19, 2020. (Photo by Jerilee Bennett, The Gazette)

The protesters were loud but orderly, waving signs, American flags, “Don’t tread on me” flags and banners. One sign seen referred to the stay-at-home order as symbolic of Nazism.

Republican House Minority Leader Patrick Neville of Castle Rock appeared to be the lone lawmaker joining in the protest.

“I’m here for small businesses,” said Linda, an Englewood resident who declined to give her last name. “Their civil liberties have been tread upon.”

Her son owns two small restaurants in California, she said, and he’s been devastated.

A large crowd, many waving U.S. flags and protest signs, descended on the Colorado State Capital for “Operation Gridlock” to protest against Colorado stay-home orders. The organizers of the rally asked those attending to stay in their cars to protest and follow social distancing to be safe. But a large crowd gathered on the lawn of the capital, many not wearing masks on Sunday, April 19, 2020. (Photo by Jerilee Bennett, The Gazette)

Erika Lakant, who owns a construction company, said it hasn’t been shut down, but business is way down.

Denver Police and the Colorado State Patrol monitored the protest, but did not enforce the public health advisories, such as staying 6 feet apart or wearing a mask in public.

Protesters’ signs called for firing Dr. Anthony Fauci, the director of the National Institute of Allergy and Infectious Diseases, who has been a voice of caution during daily coronavirus task force force briefing that are broadcast daily at which President Donald Trump has denounced Democratic governors for resisting his desire to reopen the country by May 1.

Causes weren’t limited to the pandemic restrictions, running the gamut from opposition to the proposed reintroduction of wolves in Colorado.

Zander Marshall of Thornton, who sells insurance to small businesses, said he’s been allowed to stay open as an essential business, but “I’m shut down because they’re shut down.”

“The president has said it’s fine to be out there,” he said. “A lot of my friends, people I work with, don’t have jobs, no food to put on the table. They worry.”

Jocelyn, an eighth-grader at Rocky Top Middle School in Thornton, said she wants to go back to school and see her friends.

“They’re taking away our education and our chance to be around other people,” she said. “They won’t let us leave our houses and they closed the parks.”

“I understand how the immune system works,” she said.

It comes down to the health of a person’s immune system, and the sick should quarantine, she said, adding that everyone should do what they want. She also said she doesn’t worry about being exposed to someone who is asymptomatic. “If a person is asymptomatic, it means they have a healthy immune system.”

The onset and duration of infectiousness for COVID-19 are not yet known, according to the Centers for Disease Control and Prevention’s website. “There are reports of asymptomatic infections (detection of virus with no development of symptoms) and pre-symptomatic infections,” the CDC said.

Counter protester Mitchell Webb (left) argues with protesters who were protesting Colorado stay-home orders. A large crowd, many waving U.S. flags and protest signs, descended on the Colorado State Capitl for “Operation Gridlock” to protest against Colorado stay-home orders. The organizers of the rally asked those attending to stay in their cars to protest and follow social distancing to be safe. But a large crowd gathered on the lawn of the capital, many not wearing masks on Sunday, April 19, 2020. (Photo by Jerilee Bennett, The Gazette)

The protest drew a handful of counterprotesters. Stephen Parlato of Boulder stood under the Civil War statute on the Capitol steps holding a sign that said, “Only widespread testing will tell.”

“I believe these people are very sincere with their concerns, being kept from earning a paycheck and the psychological torture of being homebound,” he said, adding he believes it’s dangerous for the president to be pressuring states to open up.

“A gamble that sets a priority for reelection above the lives of the citizens.”