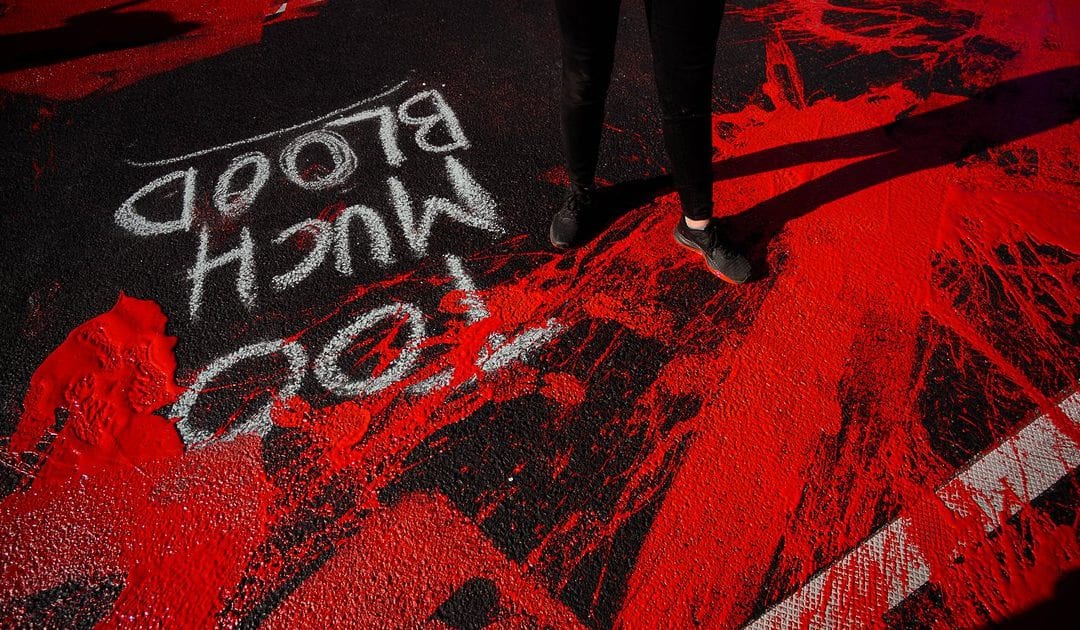 Salt Lake County prosecutors on Tuesday charged three protesters with rioting and helping to spread red paint on the road and on the district attorney’s building during a July demonstration — and accused the group of acting as a gang while doing so.

Two of those charged, Madalena McNeil and Marvin Oliveros, were accused of first-degree felony criminal mischief with a gang enhancement that could make the count punishable by up to life in prison. They are also charged with rioting. A third person, Hurija Mustafic, 26, faces a third-degree felony count of rioting and two counts of assaulting a police officer.

These are the most recent charges in connection with the July 9 demonstration, where protesters against police violence came together to rally against District Attorney Sim Gill’s decision to not charge two police officers for fatally shooting 22-year-old Bernardo Palacios-Carbajal in May.

During that protest, demonstrators spilled red paint on the road in front of the district attorney’s office in downtown Salt Lake City and streaked paint on its walkway and glass facade. Some took metal rods to the building, smashing some windows.

Court documents allege that McNeil, 28, bought the red paint at a Home Depot shortly before the protest began, saying surveillance footage from the store shows her making the purchase.

Videos from the protest showed Oliveros, 39, and a white van parked in front of the district attorney’s office, the charging documents state. After the crowd cleared, a detective peeked inside the windows of the van — registered to Oliveros — and saw red paint, paint rollers and a ladder inside, according to the court papers.

Oliveros also allegedly remarked in a livestream that the paint supplies were stored in his van, the documents state.

Prosecutors are also accusing McNeil of shouting at police officers during the protests and trying to “incite” other demonstrators. The documents state that, during one encounter with an officer, she balled up her fists and shifted her weight “as though to slam into” an officer. The officer pushed McNeil back with his shield, the court papers state.

Mustafic is charged with kicking a police officer and grabbing her baton and shield during the clash, according to the documents.

During the July 9 demonstration, some police were injured, and officers responded by pushing some protesters to the ground and hitting them with clubs. Two protesters were treated at a hospital, and many reported minor injuries after police charged at protesters.

Following the protest, McNeil tweeted a photo of large bruises on her arm, saying she’d been hurt by officers during the demonstration.

The American Civil Liberties Union of Utah has said its trained observers have documented a “concerning pattern” of officers using excessive force against protesters during the July 9 demonstration and others decrying police violence.

Reached by phone Tuesday evening, Gill said McNeil and Oliveros were charged with first-degree felonies after prosecutors reviewed the elements of each case. The gang enhancement, which reflects the participation of two or more people in the alleged crime, elevates the charge to the first-degree felony, with a punishment of up to life in prison, he said.

Asked if the arrests would have a chilling effect on protest, Gill said he supports demonstrations and has joined them in the past but draws a line when participants begin to break the law.

“The conduct of the few should not hijack what is a very important message,” he said.

Because the cases involve protests against his office, Gill said he’s finding an outside prosecutor to handle them.

The estimated cost of cleaning and repairing the office building exceeds $50,000, according to court documents.