More Colorado news orgs got Facebook money. What that means for them. 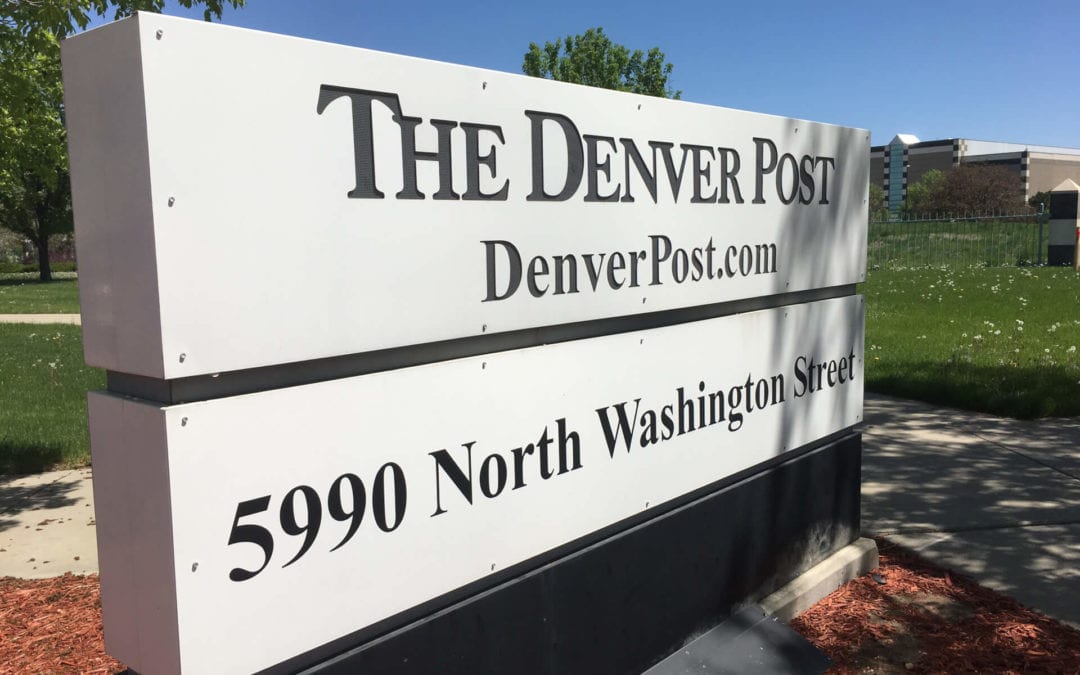 Nearly half a million dollars in Facebook money plunked down on six Colorado news outlets this week, part of a multi-million-dollar cash infusion the social networking platform says is to help a hemorrhaging industry.

Across the country, more than 200 local news organizations chopped up $16 million from the tech giant. “These grants stem from $25 million in local news relief funding announced in March as part of Facebook’s $100 million global investment in news,” the company stated.

For Colorado, this was the latest round of FB bucks to drop. In April, this newsletter reported how eight Colorado newsrooms pulled in money linked to the social network run by Mark Zuckerberg, who, Forbes reported, has an estimated net worth of more than $60 billion.

Both mega-companies also have created programs to kick some of that cash back into the local news scene, which in turn thanks them for it.

In Colorado, beyond these multiple Facebook grants, Google is funding a newsroom experiment in Longmont. Is this altruism, being a good corporate citizen, or a realization that both large companies need a healthy local news ecosystem to support their bottom lines and also maybe hold regulators at bay as the platforms struggle to limit their roles in the spread of dangerous misinformation online? Regardless of why, is what they’re doing enough? Also: Might it keep some outlets from scrutinizing their behavior? Some news organizations seem loath to take government money for a variety of reasons, but what about money from powerful so-called Net states or “digital non-state actors” some liken to “the equivalent to global superpowers”? All questions to keep in mind as local news organizations scramble to plug holes in a bottomed-out business model that late-capitalism wrought well before the brutal impacts of this current pandemic.

Then again: What are you supposed to say when the editor at a small local newspaper tells you, like one did this week, how a Facebook grant likely kept it from closing? (“Glad to hear it,” was my answer.)

Upon news that The Denver Post earned one of these grants, some readers immediately wondered whether the money would go toward producing more local journalism or be hoovered up by the newspaper’s hedge-fund owner. A very fair question. And the answer to the latter is no, says Daniel Petty, digital director of audience development for Media News Group, which includes the Post. “It has to be spent on reporting and journalism,” he says. That could also mean commissioning freelancers, paying for open records requests for newsgathering, and supporting internships, for instance. About that $150,000 number, though. It might sound big for a single newsroom like the Post but the money will also go to other MNG papers, too, and doesn’t have to stay in Colorado. “It’s being spread around the company,” Petty says. The paper is grateful for the new money (the third grant Facebook has made to The Denver Post), he added, which has helped the paper better ramp up subscriptions.

I pinged a couple of the smaller newsrooms to see what Facebook’s cash meant for them.

From Jocelyn Rowley, editor of :

Our grant funds will be used to bolster our COVID19 coverage, subsidize advertising for struggling local businesses, and provide free subscriptions to elderly and low-income residents. In the coming weeks, we are hoping to add a part-time reporter, an educational outreach specialist, and a social media coordinator, and will begin working with small businesses in the area who want to advertise with us, but are experiencing a financial hardship.

But, I don’t want to overlook the fact that this grant in all likelihood saved the Left Hand Valley Courier. We are a very small newspaper in Niwot, with a small staff and limited resources, and were forced to cut our print edition when advertising revenue plummeted in March. In April, we transitioned to online subscriptions, and the funds provided by the Facebook Journalism Grant will help us continue to publish as we struggle back to profitability under this new scheme.

As for another small news outlet, Brian Orr, co-publisher of the World Journal in Walsenburg, said, “Real basically, we’ll be using the Facebook grant to stay in business.” That paper hasn’t laid anyone off, “and now that threat is lifted,” he said. “We paid our back printing bill, and will be able to sock away ad revenue coming in now for the next big slowdown in the fall.”

‘I got laid off from Westword today’

About two months ago, a newsroom labor union trying to organize its workers announced Westword’s parent company, Voice Media Group, was slashing pay. The employees also warned budget cuts could lead to layoffs. That happened at some of Westword’s sister papers, and now the pandemic-induced contractions have come to Denver.

On May 8, staff writer Chase Woodruff said, “I got laid off from Westword today.” He called writing for an alt-weekly a dream job, and he carried out that dream in the true spirit of the unruly alts of yesteryear with a profane smashmouth style and a social media presence that entertainingly eviscerated the day’s buttoned-down political reportage from D.C. to Denver. As someone who said he planned to vote for Democratic Gov. Jared Polis, these days Woodruff lances the state’s chief executive sometimes better than the governor’s sharpest conservative critic. Woodruff used to have a pinned tweet that quoted Joseph Pulitzer’s creed from 1907, and said about it, “One really striking thing about the National Conversation About Journalism we’ve had lately is how narrowly so many journalists want to define their role. It’s all: we tell stories, we get the facts, we’re defenders of truth. Imagine seeing this from a newspaper editor today.”

Woodruff “pushed Westword in the right direction,” said the paper’s former managing editor, Ana Campbell, who now runs Denverite. On his way out of the alt-weekly world, Woodruff urged his readers to keep supporting Westword “and any other outlet committed to independent, adversarial, occasionally rude and angry journalism. The world needs it.” Indeed it does. (His Westword archive lives here.)
A few days after he was let go, Woodruff penned a powerful essay on his personal website titled “stay mad” that includes a searing media critique. From the manifesto:
It’s obvious who profits from a news media that has grown increasingly sanitized, under-resourced and afraid to be seen as antagonistic or unruly. If you believe at all in the power of the press to make the world a better place, it comes as no surprise that its decline has corresponded with the rise of entire rotten generations of new or newly re-emboldened villains: megalomaniacal tech billionaires and unabashed white-nationalist demagogues, economy-crashing Wall Street robber barons and planet-burning climate deniers, an ever more cartoonish and more powerful tableau of ruthless plutocrats and conspiracist grifters and mercenary political operatives and, not least, the dodderingly despotic reality-television star currently presiding over it all.
Personally, I think we might benefit from more writing like that around here— and hopefully someone might pay him to do it.

As Republican President Donald Trump continues his anti-media schtick during press briefings and on social media, some governors have taken a different route. They’ve gone out of their way to praise the work of local news outlets during a scary and confusing time.

Some local journalists responded, but not in the way the governor might have expected. From Denver Post senior politics editor Cindi Andrews:

A new digital information site “dedicated to community-based commentary and advocacy-focused coverage of Denver Public Schools” has hit the scene.

Here’s what Gottlieb said about the site in an email he circulated recently:

Some of you grizzled veterans might remember that before Chalkbeat existed, I launched EdNew Colorado in January 2008, with Todd Engdahl covering the General Assembly and me soliciting and writing commentaries on the education issues of the day. As I merged EdNews with Elizabeth Green’s GothamSchools to form Chalkbeat, we decided that the edgy commentaries would distract from Chalkbeat’s goal of becoming the most credible and neutral education news source possible. So we did away with that component of what had been EdNews. I’ve always missed the give and take the commentary section provoked, and I’m hoping to revive that here. This site in no way competes with Chalkbeat, which does a stellar job covering Colorado education. What I’m trying to do is provide the op-ed page for Denver education coverage which has been missing for several years.
Check out this new site here where it sounds like things could get spicy.

Last week in this humble little newsletter about the news behind the news I had the embarrassing responsibility of making a correction about a section of the newsletter that, ironically, had highlighted a local newspaper’s front-page correction that had also needed to be corrected. No journalist wants to issue corrections; they’d rather get it right the first time. But when they screw up, which is bound to happen sometimes, they’re supposed to correct them — and swiftly. Also last week, I made the case for why we’re likely to see more typos, errors of fact, and other “howlers” in daily newsprint, leading to more corrections, as more and more editors who do the proofreading are getting laid off.

Consider last week’s headline in The Gazette, claiming that Leon Kelly of El Paso County Public Health said the county was ready to reopen. They quote Kelly: “We could open businesses tomorrow — open them all — it does not matter if people are too scared to go to those restaurants, too afraid to go to those shops. Our job is to prove that we are ready. El Paso is ready to go.” However, The Gazette failed to report the rest of his statement. Kelly took to social media to correct the record — because The Gazette didn’t.

The alt-weekly column about owning up to errors, omissions, and mistakes was later updated at the end with this: “Clarification: Regarding last week’s publisher’s note, according to Leon Kelly, the media outlet who cut off his remarks was KRDO. While The Gazette also claimed that Kelly wanted to completely re-open the economy in its original coverage, it has since updated the story to more accurately reflect Kelly’s stance.”

On social media, Chieftain sports reporter Austin J. White asked for a clarification from the paper.

Can we get a clarification @csindependent? This column sure makes it sounds like the Chieftain didn’t run any kind of correction. The paper also is not owned by GateHouse anymore like the story states https://t.co/2FigvsIVE3

Littwin says a lot more about the new direction of The Colorado Independent and its editors, Susan Greene and Tina Griego, and so you should read it here. In their own newsletter today, those editors added this: “The Indy’s thoughtful statehouse reporter, John Herrick, and Forest Wilson, our former intern who has grown into quite the resourceful correspondent, will be ending their stints with us.”

When you come to our site this spring and summer, you’ll find stories from us, from our partners such as Sandra Fish, who is helping journalists and the public root out viral misinformation, and Jeff Roberts, the Colorado Freedom of Information Coalition’s public-records and open-meetings watchdog. You’ll find the early fruit of our reporting partnerships. We’ll be highlighting journalism from the Eastern Plains to the Western Slope, from valley to mountain and points in between. You’ll still be able to read Corey Hutchins’s media column as he tracks massive changes to Colorado’s media world. And our guest posts aren’t going anywhere, so please keep submitting.