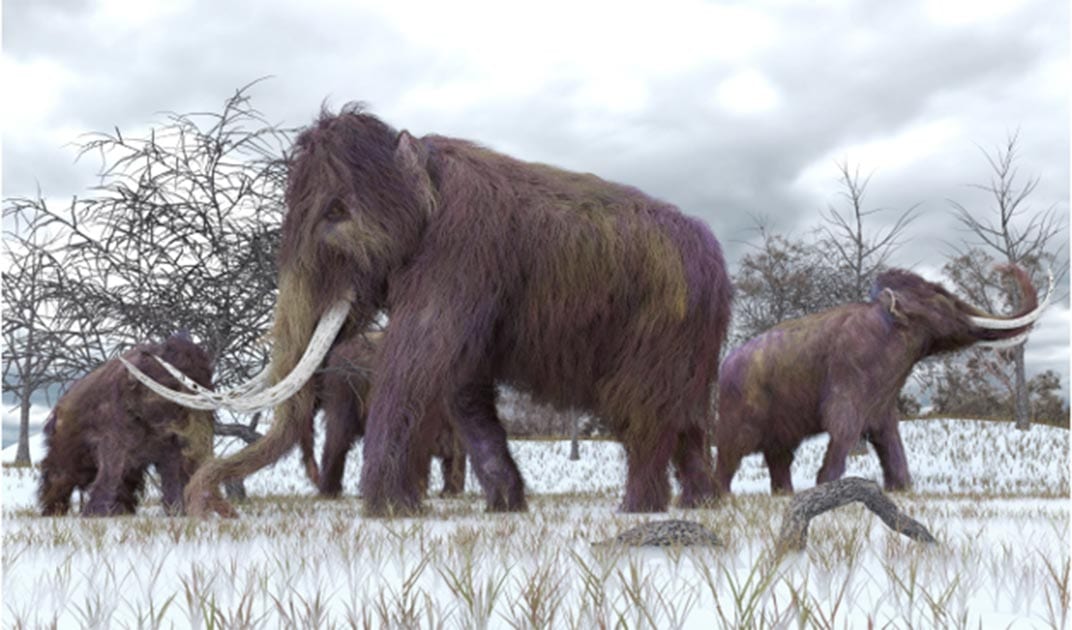 A mammoth-bone structure discovered in Russia dating to 24,000 BC is declared as “the oldest ever built” by Homo sapiens.

The Upper Paleolithic, or Late Stone Age, in Eastern Europe loosely defines the period between 50,000 and 10,000 years ago, and latterly hunter-gatherer groups lived in circular dwellings constructed with huge mammoth bones representing the earliest examples of architecture. But now, archaeologist and his team of researchers from the University of Exeter in England have published a new claiming one such prehistoric construction in Russia is “the oldest ever”, and it’s a whopper.

Presumed to have been covered with animal skins these circular mammoth-bone structures are thought to have sheltered ancient hunters during long and hard full-glacial winters and they generally comprise a concentrated ring of mammoth bones with deep pits around their outer perimeters. These pits had originally been quarried for loess for using in construction, but afterwards they were used for food and fuel storage, and for waste.

But some of these structures, such as the one uncovered at Kostenki, seem unfeasibly large for simple abodes. Impressed with the size and appearance of these ancient mammoth-bone structures some archaeologists argue that they had religious significance and Paul Bahn’s 1995 book, , describes them as the “ earliest examples of monumental architecture, as evidence of increased social complexity and status differentiation during the final phase of the Ice Age. ”

Photograph of the mammoth monument remains, taken from the museum roof in 2017. The two visible scales (center) are 5 and 6 meters long/ (Image: a. E. Dudin / )

The Oldest Mammoth-Bone Structures On The Russian Plain

These mysterious ancient structures have been found along the Dniepr river valley of Ukraine, and at locations near Chernihiv, in Moravia, Czech Republic, and in southern Poland, dating between 23,000 BC and 12,000 BC, but perhaps the best-known mammoth-bone hut site is , located on the Don River near Voronezh, on the eastern margin of the Central Russian Upland about 400 kilometers (250 miles) south of Moscow.

The Museum-reserve Kostenki consists of 26 archeological sites of Upper Paleolithic period. One of its sites Kostenki 11 was conserved inside the museum building in 1979. This cultural layer represents the ancient dwellings remains made of mammoth bones. This dwelling, stone and bone artifacts and artistic reconstructions of Ice Period represent the modern museum exposition. (Image:  Russian Museums Info )

Sizing Up The Mammoth Ancient Dwellings

This third discovered mammoth-bone structure is located only 20 meters (65 feet) west of the other two and the uppermost bones were found at 0.6m (2 feet) below the modern ground surface. And even though shrub roots and animal burrows had invaded the ancient site the archaeologists say the bones themselves were remarkably well preserved and “ almost in their original positions .”

Compared to the first two mammoth-bone huts this third circle has a much bigger diameter measuring approximately 12.5 meters (41 feet), and a large spread of combustion deposits was discovered to the south-east of the structure containing “ layers of rubified loess mixed with burnt bone and charcoal. ” Alexander Pryor’s new paper presents the analysis results from samples of charcoal, burnt bone and microlithic debitage using a new method of analysis called flotation, which according to the paper is “the first time” a mammoth bone circle has ever been systematically sampled in this way.

Aerial photograph of the new mammoth-bone structure at Kostenki 11, taken using a drone during excavations in 2015 (photograph by A. Yu. Pustovalov & A.M. Rodionov). Sampling locations are indicated by the black squares and rectangles. The location of the burnt deposits and pit features are also shown. (Image: A.J.E Pryor / )

Charcoal samples were radiocarbon dated at the and produced a calibrated date range of “ 25,063-24,490 years before present ” and the scientists say a chronological link between the charcoal and human occupation of the site is “ strongly supported ,” confirming that this third structure is the “ oldest known circular mammoth-bone feature built by modern humans on the Russian Plain ,” inhabited at the onset of the last glacial maximum . And the reason Alexander Pryor says it’s the oldest mammoth-bone structure built by “ ,” is because an earlier mammoth-bone structure was created by Neanderthals at Molodova 1, Ukraine, which dates to older than 44,000 years ago.

After reading this stimulating paper several questions jumped into my head, and one of those was: what did hunters in the region live in “before” mammoth-huts? In an email to Ancient Origins Alexander Pryor said he suspected these would have been, “conical or domed hut structures built from wooden poles covered with animal hides or plant materials such as grasses.”

A mammoth dwelling, like this at the “Frozon Woolly Mammoth Yuka Exhibit” in Yokoyama, Japan, would have been much smaller than those found at Kostenki 11. (Image: )

And when Dr. Pryor was asked “when” early hunter-gatherers first began dwelling in mammoth-bone huts he told Ancient Origins: “ I certainly don’t think that the Kostenki 11 structure is a “dwelling ”, and he reminded that some researchers have suggested they “ may have functioned as ritual monuments .”

If these structures were ritualistic monuments , as Alexander Pryor and others suggest, it is only time before an archaeologist refers to them as “ temples,” and if this were ever to happen, Göbekli Tepe in Turkey, built around 9,000 BC, will immediately become a relatively modern temple built closer to us, in time, than to the mammoth-temple builders of 25,000 BC.

Excited at this prospect, I asked Dr Pryor if archaeologists have ever discovered any evidence of ritualistic beliefs or practices within the artifacts or in the hut layouts?…but he said:

It looks like for now I (we) will have to wait a little longer for those elusive, and would-be glorious words: “ 25,000-Year-Old Temple Discovered In Russia .”