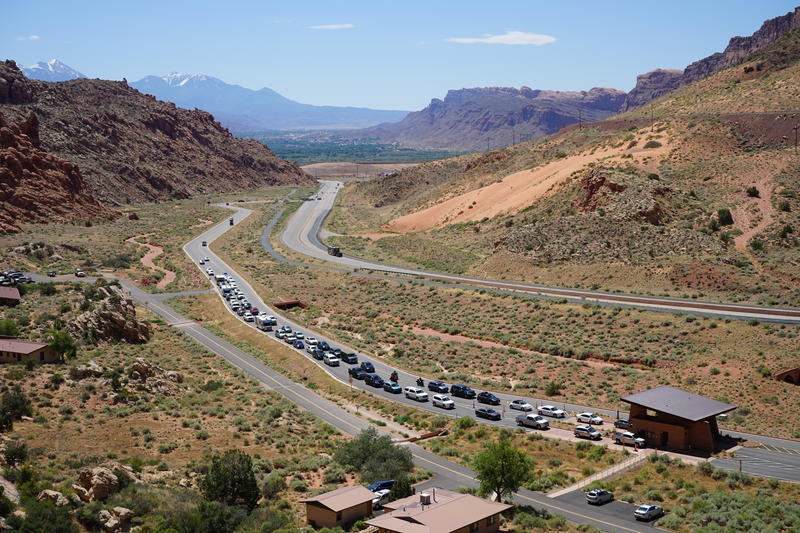 The chief medical officer at Moab Regional Hospital is urging people not to visit that area right now, because of the coronavirus pandemic.

“The best thing we could all do is stay at home,” Dr. Dylan Cole said. “I don’t think this is the time to encourage people to take cross-country road trips.”

Cole’s statement comes in response to a news report published Friday that encouraged Utahns to visit national parks during the outbreak.

Springdale Mayor Stan Smith, a hotel owner, told the Salt Lake Tribune that domestic tourism could bolster the local economy, which usually sees a lot of international visitors at this time of year.

“Our occupancy rate is higher today than it was Monday,” Smith said Thursday.

And despite the statewide cancellation of events and the shutdown of public schools, people are also still visiting Moab—which does not yet have a confirmed case of the virus.

Camping sites at Sand Flats Recreation Area were also full this weekend, according to Howard Trenholme, chair of the Moab Area Travel Council. He said the closure of ski resorts in Utah and Colorado have likely contributed to people visiting Moab.

“People are pouring out of the cities and mountains to come to the desert, where it’s 60 degrees and sunny right now,” he said.

He added that Moab is the only city in the state that does not levy a property tax, making its economy extremely dependent on tourism. Last year, visitors spent roughly $130 million on hotel rooms alone in Moab, according to the transient room tax numbers for 2019.

Despite the steady stream of tourists, Trenholme said the economy is already taking a hit from coronavirus. He said hotels are seeing a lot of cancellations and rebookings and that many restaurants, including his own, are switching to take-out only.

“I laid off two employees this morning,” he said. “And this is the time of year when I’m usually hiring.”

Despite the negative economic impact coronavirus is having on tourism towns like Moab, Dr. Cole said that discouraging tourism is necessary to help slow the spread of the virus.

“We are sending a strong message to stay home,” Cole said. “And [Moab] is full of tourists. It is really jaw-dropping to me.”

Similarly, the Center for Disease Control updated its guidelines on Sunday to recommend all events with more than 50 attendees be cancelled or postponed for the next eight weeks. Although visiting national parks like Arches and Canyonlands doesn’t require directly interacting with many people, Cole said it still leads to a high concentration of people in one area.

“My strong concern is that we are greatly increasing the risk of a significant uptick in this viral illness,” he said. “We are putting all of our health at risk.”

Cole also warned that people who are asymptomatic can spread the virus unwittingly, and emphasized that most rural hospitals are not prepared to deal with a coronavirus outbreak. Moab Regional Hospital does not have an intensive care unit and has only three ventilators.

Cole, who is a family physician, said the 17-bed hospital can only care for up to five people who have critical symptoms from coronavirus, and would have to airlift any more to Grand Junction, Colo. or another hospital with an ICU. Meanwhile, Mesa County, Colo. — where Grand Junction is located — has at least one confirmed case of coronavirus.