MLS Week 31: Seattle and Colorado draw in the West, another Revs win in the East 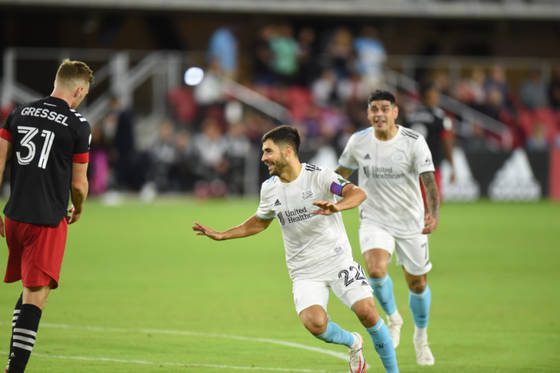 The roundup of a midweek matchday in MLS starts in Colorado where the Rapids and Seattle drew 1-1 at Dick’s Sporting Goods Park. Dominique Badji scored for Colorado in the 66th minute and Cristian Roldan equalized in the 81st. The 1st-place Sounders are now six points ahead of 2nd-place Sporting and 3rd-place Colorado.

“I give Seattle all the credit in the world,” Colorado coach Robin Fraser said. “They’re a very, very good team. But the goal is one that is going to cause some debate around here. We love VAR for all of the calls that they get right, but it’s disappointing when you feel like with all of that help that the calls still aren’t right. So it’s a little bit disappointing to drop the game, but like I said it was a really, well-played game between two pretty well organized teams.”

New England added three more points to the top of the Eastern Conference with a 3-2 win at DC United. Trailing from a 51st minute Nigel Robertha goal, the Revs’ Adam Buska equalized in the 61st and Carles Gil gave them the lead in the 64th. Gustavo Bou made it 3-1 in the 79th. DC’s Ramon Abila pulled a goal back three minutes into stoppage time.

“Well, I think the players had more to do with it than the coach talking at halftime, to be honest with you,” New England coach Bruce Arena said. “That’s my opinion. I talked to them before the game too, so am I responsible for that first half? The players know how to play. They know what they need to do. They just had to pick it up and they picked it up a notch, and our top three attacking players got the job done.”

NYCFC got a late equalizer at Mercedes-Benz Stadium to split the points with Atlanta in a 1-1 draw. Marcelino Moreno put United up in the 17th and Gudmundur Thorarinsson leveled the score in the 90th minute. “I would say that we lost two points. Simple, that’s it,” Atlanta coach Gonzalo Pineda said.

Chicago beat FC Cincinnati 4-3 on the road in a game between two teams already eliminated from the playoff race. Robert Beric scored for the Fire in the 14th and 17th minutes. FC Cincinnati got back into the game with goals from Luciano Acosta (28th) and Brandon Vasquez (36th). Alvaro Medran returned Chicago’s lead in the 71st with Tayler Blackett equalizing a minute into stoppage time. The Fire’s Luka Stojanovic scored two minutes later.

Inter Miami shutout Toronto 3-0 at home. Federico Higuain opened the scoring in the 10th and Christian Makoum doubled the lead in the 45th. An own-goal made it 3-0 Inter in the 61st minute. Miami goalkeeper Nick Marsman kept the clean sheet with four saves.

Orlando and Montreal drew 1-1 at Exploria Stadium. Christopher Mueller scored for City in the 45th and Rudy Camacho equalized in the 51st. Orlando finished with four shots on goal to Montreal’s two.

LAFC beat FC Dallas 3-2 at Toyota Stadium. Ryan Hollingshead put Dallas up in the 10th minute with Cristian Arango equalizing from the penalty spot in the 33rd. Dallas’s Franco Jara scored in the 45th, but it was Arango equalizing in the 75th and scoring LAFC’s winner in the 79th minute.

Minnesota beat Philadelphia 3-2 at home. Adrien Hunou scored for United in the 41st. Philadelphia responded through Daniel Gazdag, equalizing in the 45th and putting them ahead in the 54th. United’s Robin Lod pulled them level in the 63rd and Franco Fragapane scored in the 67th. Minnesota finished a man down with a red card to Romain Metanire in the 77th minute.

Vancouver came back to beat Portland 3-2 at Providence Park. Trailing 2-0 to goals from Yimmi Chara (15th) and Dairon Asprilla (42nd), the Whitecaps left the scoring for the second-half. Deiber Caicedo pulled a goal back in the 63rd and Brian White equalized in the 75th. Cristian Dajome converted an 82nd minute penalty for the Whitecaps winner.