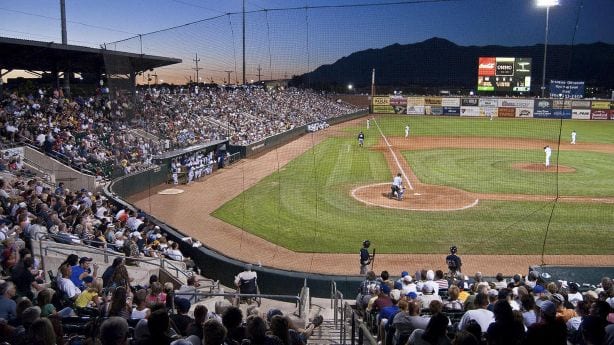 SALT LAKE CITY — There’s life for the Ogden Raptors and the rest of the Pioneer League after all, but that new life will apparently not include baseball in Orem.

Major League Baseball announced a partnership with the Intermountain league on Monday. Under the agreement, the Pioneer League will facilitate independently but will have some ties to MLB, allowing big-league teams to scout players.

As the news broke, Orem Owlz ownership announced they would move to a stadium in Windsor, Colorado, and play as the Northern Colorado Owlz. The team’s owner, Jeff Katofsky, issued a statement to multiple Colorado media outlets that called the move “bittersweet.”

“We have been fortunate to spend the last 15 years in Utah, and are so grateful for the support the Orem fans, community, and corporate partners have shown us,” the statement read in part, according to the Fort Collins Coloradoan. “However, we look forward to serving the Northern Colorado community and providing high level competition and affordable family fun, alongside youth sports and entertainment”

The transition for the entire league will be in place for the 2021 season.

The agreement means the Raptors will lose their MLB affiliation with the Los Angeles Dodgers and the possibility with any other major league team. The Dodgers provided their draft picks and other young players to the Utah teams as a part of the Minor League Baseball pipeline. For example, 2020 World Series MVP Corey Seager and 2019 National League MVP Cody Bellinger played for Ogden early in their professional careers.

It will be up to Ogden to sign players, but there will be an incentive for players to join the team or the league. Under the agreement, MLB will provide “initial funding” of league expenses and install new scouting technology for Pioneer League teams. The scouting information can be fed back to big league ball clubs, and players from the Pioneer League can be transferred to an MLB organization.

Ogden and the Northern Colorado Owlz will join existing Pioneer League ball clubs in Billings, Montana; Colorado Springs, Colorado; Grand Junction, Colorado; Great Falls, Montana; Idaho Falls, Idaho; and Missoula, Montana, in the new venture. MLB officials stated that it would provide organized baseball to cities in the western U.S. and Canada, which means there could be more teams added in the future.

“Over the past year, we have worked closely with Pioneer League owners and elected officials to ensure the continued success of baseball in the Mountain West,” said Morgan Sword, MLB’s executive vice president of baseball economics and operations, in a prepared statement. “We’re excited to support this new initiative and look forward to Pioneer League baseball returning in 2021.”

The announcement puts an end to the speculation of what would happen to the Raptors, Owlz and Pioneer League once the MLB-MiLB deal ran out. It also adds to a massive overhaul of minor league baseball around the country that’s taken place over the past few months following a season canceled as a result of the COVID-19 pandemic.

The speculation that the Pioneer League was in trouble began over a year ago when Baseball America reported that MLB would seek to trim 42 teams from the minor league system once their agreement with MiLB ran out in September 2020. The reported list included all the teams in the short-season and rookie leagues like the Pioneer League.

The backlash led to a bipartisan letter sent to MLB commissioner Rob Manfred, which urged him and the league to reconsider. MLB ultimately assumed control of MiLB after the deal between the two organizations ran out, and the league went forth with plans to shed minor league organizations from the MiLB pipeline; however, it also found ways to keep the outcast teams around. It previously announced that the Appalachian League — a league similar to the Pioneer League — will be converted to a summer circuit for the country’s top underclassmen college players.

MLB also announced Monday it will launch a brand new MLB Draft League in 2021. The league will feature clubs in New Jersey, Ohio, Pennsylvania and West Virginia — areas that also lost affiliations with big-league teams as a result of the minor league cutdowns.

The teams in the new league — to be made up of top high school, junior college, and four-year college players across the country — will play a 68-game schedule from May through August with a break in between for the MLB Draft. The rosters will be reshuffled after the mid-season draft so players who go undrafted can still showcase their talents for big-league clubs.

The Salt Lake Bees, which play in the Triple-A Pacific Coast League, are now Utah’s only organization within the MLB-affiliated minor league system. None of the recent shakeups have impacted the club, other than changes to future schedules with adjustments made to the list of PCL teams. One of those is the previously independent Sugar Land Skeeters will play in the PCL as the Triple-A affiliate of the Houston Astros in 2021.

Salt Lake’s affiliation with the Los Angeles Angels runs through 2022.