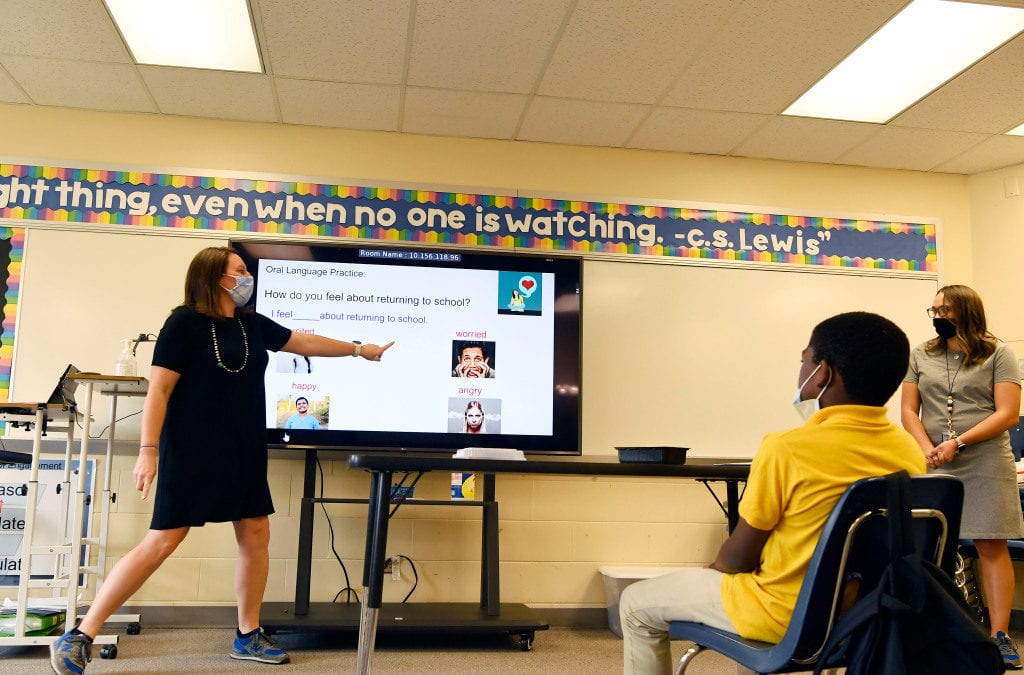 Colorado’s cash-strapped public school districts risk losing tens of millions of dollars in state funding because of coronavirus-fueled enrollment declines, money that helps pay for teachers and other student services.

That’s because most districts rely heavily on funds the state doles out based on the number of students who enroll. According to preliminary figures released by the Department of Education on Tuesday, enrollment dropped 3.3% statewide in the fall — and in some of Colorado’s largest districts, the decline was even larger. This is the first time enrollment has dropped in more than 30 years, the agency reported.

While there’s debate about whether the drop will be a part of a sustained trend, experts agree that pulling money out of the education system could have devastating effects. That’s especially true this year, as districts adapted to new needs and conditions caused by the COVID-19 pandemic.

“As everybody knows, schools are facing huge challenges in terms of how we can serve students best in this context, in this environment,” said Jim Carpenter, chief financial officer of Denver Public Schools. “Every time we reduce funding, that limits the ability to deliver services to kids.”

During each legislative session in the spring, lawmakers allocate state funding for K-12 education based on projected enrollments for the following school year. And every October, districts count the number of students so the Colorado Department of Education can then distribute funding on a per-pupil basis, as dictated by the Public School Finance Act of 1994. The dollar amount per student varies by the size of a district, the cost of living in each respective area, and the number of at-risk students, among other factors.

The average allocation to schools per student for the 2020-2021 academic year is projected to be $7,985, according to Jennifer Okes, chief operating officer of the state education department. (Enrollment and allocation figures will be finalized in January.)

Schools also receive funding from other sources, but the state’s per-pupil disbursement typically accounts for the largest portion of district budgets. In Aurora Public Schools, for example, state funding makes up 66% of the district’s budget, said district spokesman Corey Christiansen.

The state’s Joint Budget Committee makes a mid-year adjustment to school funding through a supplemental appropriation process based on enrollment and other factors. This usually occurs soon after the legislative sessions starts each January.

Sometimes certain factors such as the number of at-risk students may go up while other factors, like enrollment, go down, evening out the funding from the state. But if nothing else changes while enrollment falls, schools could lose out on money initially budgeted to them through the state’s per-pupil funding formula — unless the legislature takes action to let schools keep the money originally allocated.

With a 3.3% decrease in statewide enrollment, districts are rightfully worried.

“I figure during a pandemic, this is not a great time to start clawing back or reducing our state funding,” said Sen. Rachel Zenzinger, an Arvada Democrat, and former member of the Joint Budget Committee.

Zenzinger, who will serve as the chair of the Senate Education Committee next year, plans to introduce a bill that would signal the legislature’s intent not to reduce school funding, despite a drop in enrollment. She said she got the idea from a bill that Rep. Jim Wilson, a Salida Republican, introduced during the legislature’s special session that the Democratic-controlled chambers didn’t pass.

Wilson’s bill came before the data was available about enrollment declines, and it didn’t necessarily fit the call for the COVID-19 special session, Zenzinger said. But it’s an idea she believes is worth pursuing and seems to have support.

The other option would be to keep the money in the general fund or the state’s education fund and give money to the districts the following year, but Wilson, an educator of 40 years, said it’s much harder to put money back into the education budget than it is to take it out.

It would be near impossible for districts to absorb a reduction in state funding at this point in the school year, as much of their budgets are tied to personnel, said Tracie Rainey, executive director of the Colorado School Finance Project. In Aurora, about 80% of the district’s budget supports staff, Superintendent Rico Munn said.

The financial impacts of COVID-19 are also not likely to resolve themselves after this year. Munn and six other Denver-area superintendents called on both state and federal governments this week to support schools’ efforts to reverse learning loss and protect at-risk students who have become more vulnerable during the pandemic.

“We have demonstrated that we are a critical safety net for kids and families through education services, through nutrition services, for general wrap-around services,” Munn said. “What’s at stake is our ability to provide those in the ways that we’ve been doing.”

Whatever the state decides, Carpenter said Denver Public Schools, which has a roughly $1.2 billion general fund budget, has committed to keeping its 2020-2021 school budgets whole, even if that means dipping into district reserves. It’s a short-term solution to what he believes is a short-term problem.

Public schools saw the sharpest declines in preschool and kindergarten enrollment, which are down 23.3% and 9.1%, respectively, the education department reported. Officials say parents are delaying when their kids start school because of concerns related to the pandemic, a phenomenon known as “redshirting.”

“We believe those students will come back when parents are certain schools are healthy and safe, and students are receiving education in person,” Carpenter said.

Lawmakers are working to figure out how to handle a backfill or different options with the funding formula because of the expectation that the enrollment reduction is temporary, said Sen. Chris Hansen, a Denver Democrat and JBC member.

“I think that topic is top of mind and we’re just going to be looking at various ways we can tackle it,” he said.

But Munn is not so sure. Enrollment rates have slowed in recent years because of lower birth rates, he said. In fact, Colorado student enrollment was up just 0.1% in the 2019-2020 school year compared to the one prior. Budget-wise, districts could prepare for that, but the pandemic unexpectedly accelerated the trend and added new safety and infrastructure expenses, Munn said.

That Colorado is running a nearly $9 billion cumulative deficit on school funding since the Great Recession, thanks to the budget stabilization factor, is only compounding the problems, said Rainey. Now the state needs to step up.

“We need as much flexibility as possible in funding and funding formulas going forward,” Munn said. “We need recognition that per-pupil dollars probably need to be at a higher level given the increased needs of our students, given COVID and all the other issues in their lives.”