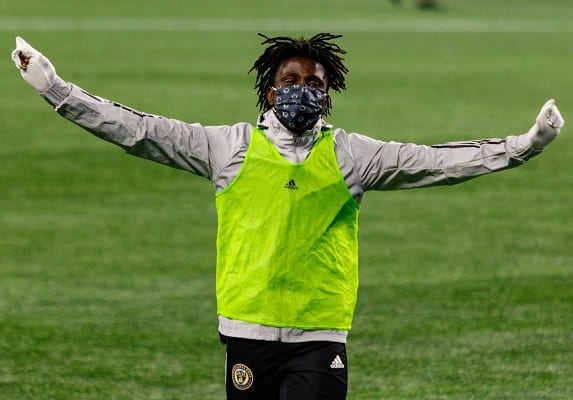 During the 2018 and 2019 seasons, Michee Ngalina was honored as one of the USL’s top 20 players under 20 years old. The speedy forward scored 13 goals across those two seasons for Bethlehem Steel FC and was signed in May 2019 by the Philadelphia Union, making his MLS debut during the 2019 campaign. Now, after a 2020 filled with inactivity, Ngalina is ready to re-introduce himself as a must-see star when he suits up for Colorado Springs Switchbacks FC.

“I am very motivated because I have so much to prove and I have goals to accomplish,” Ngalina told BGN. “My 2018/2019 form was good but I am looking forward to greatness.”

When you watch highlights of Ngalina playing for Steel FC, his movement off the ball and ability to score from distance are eye-catching. “Long distance strikes are what I do but it didn’t come naturally. I practiced that a lot and loved it since,” he said.

“I noticed how happy the crowd gets when I score and it made me feel happy as well. It is actually important to me that I enjoy myself out there as well as the crowd.”

When it comes to the off-ball movement, Ngalina isn’t afraid to keep his motor running throughout a match. He explained, “As a forward, the movement off the ball is important because you gain more possession of the ball by making the defenders tired and I am unique starting from my positional plays to my adaptability having an instinctive reaction like mine it is all different.”

There is someone within the Switchbacks FC organization that is very familiar with those skills from Ngalina. The move to Colorado Springs reunites Ngalina with Brendan Burke, who now manages Switchbacks FC after serving as Ngalina’s manager with Bethlehem. “First, Brendan Burke is a great leader,” Ngalina said. “He taught me a lot and pushed me since the beginning of my career, and in making my decision to join Colorado Springs, he played a major role.”

Not only is Michee aiming to make a splash in his club career, but he also has his sights set on breaking through to the Democratic Republic of Congo’s national team in the future. He’s had a chance to play for his country’s youth national teams in the past. “Yes, representing the DR Congo youth international level was awesome and fun, but breaking into the senior team one day is definitely one of my goals,” he said. “Therefore, it would be very special accomplishing that goal and it’ll show how competitive I am.”

He moved to the United States from the Democratic Republic of Congo when he was 16 years old. Discussing what makes his native country special, Michee said, “Besides the articles found on Google about my country such as ‘poverty’, Congo is a very special country from the food to the people that live there.”

“However, when it’s time for me to return home, I always receive lovely messages from my loved ones and the food at home is the best.”

Proudly representing the DR Congo and Switchbacks FC, 2021 will be a big season for Michee Ngalina as he continues to establish himself as a forward on the rise.