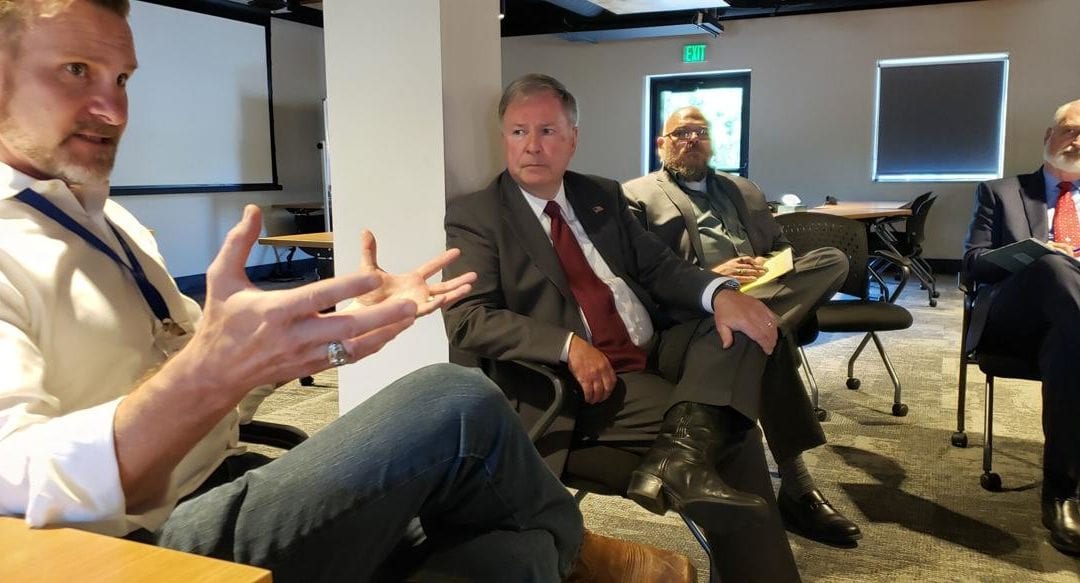 Colorado was deep in a mental health crisis long before the pandemic hit, but the care community in Colorado Springs was making inroads — trying to figure out how best to work together, and with the public, to fight a deadly trend.

“Suicide is huge, especially in Colorado and especially in El Paso County, where we’re leading for veteran” suicide, said Dr. Chuck Weber, of the city’s Family Care Center mental health clinics, where a large proportion of clients are active duty military, veterans and their families. “And I do think that it will take all of us to move that dial, for the veteran, for family members, for the community.”

Strategies begin with discussions, and prior to COVID-19 those discussions had been going well and gaining steam. Increased attention and awareness, including an ongoing reporting series by The Gazette, had led to public forums with panels of local experts that drew standing-room only crowds. More than 600 concerned residents, health care and nonprofit workers showed up for the first El Paso County Suicide Prevention Conference at UCCS, in January 2020.

Two months later, however, the coronavirus slowed progress to a crawl on the big-picture public and collaborative scale — at a time when the demand for mental health care on the home front was about to skyrocket.

During 2020, the Family Care Center saw an almost 40% increase in “encounters” over the previous year. In addition to new patients seeking help, “people that were stable for years decompensated,” Weber said. “And there are people, what we call a two-hit hypothesis, (where) there’s a biological kind of a hit … genetic … and now we have this social aspect.”

That environmental hit, the isolation and fear of pandemic times, sent anxiety and depression “through the roof,” especially among children, said Weber, whose Family Care Centers have four locations in the Springs and will open one on the city’s far east side, near Falcon, this summer.

“Our only waitlist now is for kids and couples therapy. We have a huge waitlist for that. The demand increased dramatically and we saw that. I can’t hire fast enough to meet this demand,” Weber said.

The center now has more room to house those providers and accommodate more clients. Family Care Center currently has four locations and is opening a third on the city’s east side, near Falcon, this summer. During the pandemic shut-down, it also undertook a $1.7 million renovation project at its main offices in southeastern Colorado Springs. Additions included the creation of a large first floor space, for community meetings.

“The fact is there are over 970 501c3 nonprofits in El Paso County, and … 200 to 250 are military or military veteran focused. There just so many resources,” said Duane France, a combat veteran, therapist and director of the center’s veteran services. “Dr. Weber really did want to create a place, a classroom type place, for people to join together. There’s not really a lot of large spaces like this for military and government organizations to gather, so we were relying on other locations, Hotel Elegante, City Council chambers, which isn’t really great for that collaboration.”

That new meeting space saw one of its first gatherings last Monday, when center staff met with community mental health leaders — and Colorado Springs Republican U.S. Rep. Doug Lamborn — for a discussion about what’s transpired, what they can do about it, at the local level and on up.

“My first mission is to learn more about the community mental health environment for veterans. And I’ve learned a lot on that score here today,” Lamborn said Monday. “Second, if me and my office can help open some doors, like with the VA or anyone else for that matter, so that the therapists can do a better job of reaching out and being effective with counseling veterans in need, we want to do that.”

The Family Care Center wasn’t the only mental health provider and agency to expand its footprint, and programs, during the shutdown.

“We have trained over 100 people in the community to date,” said Dora Irvine from the Steven A. Cohen Military Family Clinic at University of Colorado Anschutz Medical Campus, who attended the Monday meeting. “We cannot offer enough courses because we have so much demand. We fill up a course and have double the wait list.”

“Resources are a lot like an inverted pyramid. There’s more money and personnel at the federal level … (but) we have a lot more resources at the local level to be able to expand community education, to be able to expand those social determinants of health,” France said. “Only recently here in El Paso County have we had somebody who is designated to be a suicide prevention coordinator at the county level.”

Before the pandemic, Family Care Center saw about one patient a month by telemedicine. For most of 2020, that’s how 45% of treatment, medication management and therapy, was delivered.

As the community and providers pivot back, returning to the old rhythm, as a provider and for patients, will take time — and an understanding that, for some, the game has changed entirely.

“For some people, (telemedicine) enables their anxiety and isolation, unfortunately,” Weber said. “And there were other fears and insecurities that came up, because of that.”

Last week, El Paso County released the most recent numbers for service member and veteran deaths by suicide. In 2020, 55 service members or veterans took their own lives, two fewer than in 2019.

It’s not the news mental health care professionals had been bracing themselves for, said Duane France. It’s also not a reason to celebrate.

“We maybe anticipated that it was going to be more, but it was essentially flat,” he said. “If there was a silver lining, it wasn’t an increase, but ultimately it tells me that we still have a lot of work to do.”

“Historically in pandemics, there is usually a second wave of mental health concerns, and those of us in the mental health field are prepared for a significant increase in 2021 and 2022 for people seeking help,” Duane said. “We’re all talking about it, talking about how we will need to be able to continue providing services as we emerge out of the pandemic…. and the groups in the community can really come together and collaborate to do that.”