Meet the Gold Helmet finalists: 6 Colorado high school football players who embody excellence on and off the field – The Denver Post 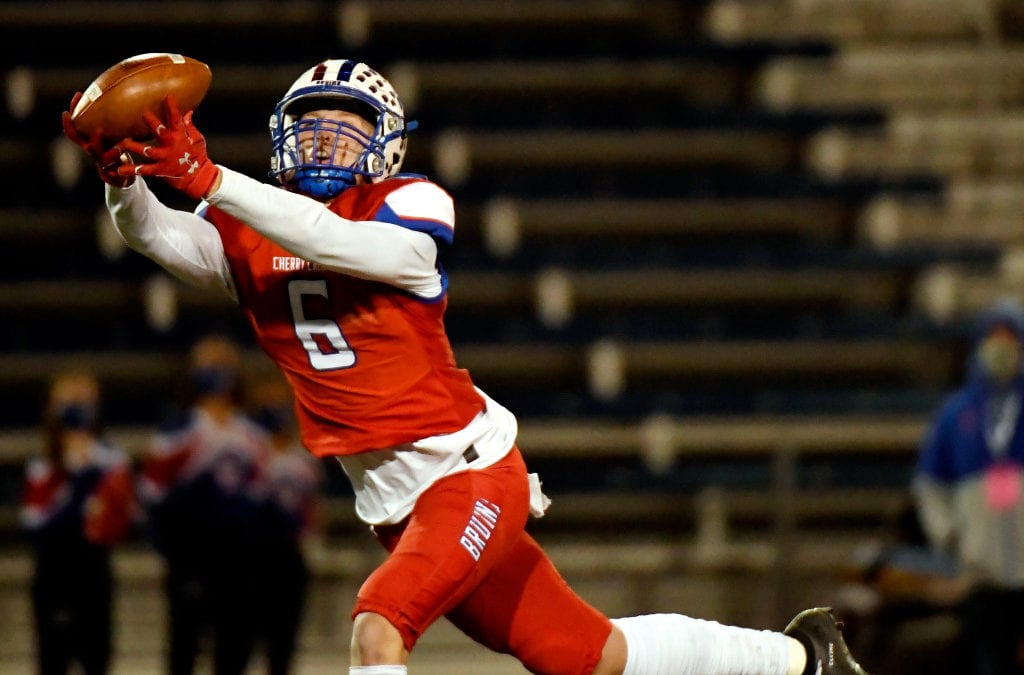 Fountain-Fort Carson running back Q Jones is the winner of the 2020 Denver Post Gold Helmet Award, edging six other worthy senior finalists. Here’s a look at each of them:

Cherry Creek senior Chase Penry goes to catch a pass at the 20 yard line during the 5A state football championships against Valor Christian at the Neta and Eddie DeRose ThunderBowl in Pueblo on Saturday, Dec. 5, 2020.

On the field: Rated a three-star wide receiver by 247Sports.com, Penry is bound for CU after finishing 12th in state history with 167 receptions — even while playing a shortened senior season. The 6-foot-2 wideout started on back-to-back 5A state championship teams his junior and senior years, as well as the 2018 Bruins squad that reached the state title game when he was a sophomore. Penry finished with 2,193 yards receiving and 26 touchdowns, including a senior year that saw him catch 53 passes for 760 yards and nine TDs in nine games.

Off the field: An academic all-state honoree in football and basketball, Penry’s athletic skills and 3.7 cumulative GPA garnered offers from multiple Ivy League schools. On top of taking a challenging course load at Creek, Penry volunteered at local homeless shelters and for a food bank that bought meals from restaurants struggling through COVID closures and delivered them to churches and families in need. In addition, Penry worked at Creek’s youth football camps and provided training for multiple students after the pandemic hit last spring. He continued that training work with a handful of DPS students when their season was postponed to the spring.

Senior quarterback Jack Pospisil takes a water break during the first round of the Class 5A state playoffs between Eaglecrest and Pomona at Valor Stadium in Highlands Ranch on Friday, Nov. 20, 2020.

On the field: An all-state wide receiver his junior year (53 receptions, 818 yards, 12 TDs), Pospisil made the switch to quarterback as a senior. He didn’t miss a beat, putting up 1,097total yards (705 rushing, 392 passing) with 15 touchdowns (11 rushing, three passing and one returning) as an all-state pick for the 5A state semifinalists. The three-year varsity starter in both football and baseball is headed for Central Missouri next fall, where he will play football on athletic and academic scholarships.

Off the field: In the classroom, Pospisil graduated with a 3.95 GPA while also giving time to the community and “never missing a workout” with the Panthers football and baseball programs, according to football coach Jay Madden. Pospisil volunteered for Pomona’s youth speed and agility camp and the Arvada Food Bank. He also worked with Moore Special Education students while in school.

Loveland senior Zack Rakowsky (5) makes a breakaway for the end zone during the 4A state football championships against Palmer Ridge at the Neta and Eddie DeRose ThunderBowl in Pueblo, CO on Friday, Dec. 4, 2020.

On the field: A three-year varsity letterman in football, Rakowsky ran for 2,700 yards and 41 touchdowns over a prep career that included a pair of 4A state championships. The CSU Pueblo commit put up back-to-back 1,000-yard rushing seasons his final two years, despite spending a significant chunk of time at quarterback (73-of-139, 1,035 yards, 10 TDs). His 1,393 rushing yards and 19 TDs last fall powered a state title run that ended with him being named 4A state player of the year. He also started two seasons for the basketball team, averaging 14.1 points, 2.5 assists and 2.7 steals per game as a senior.

Off the field: One of two athletes honored by the National Football Foundation of Colorado as a scholar-athlete, Rakowsky graduated 66th out of 417 students in his class with a 3.865 GPA. Outside of school, he volunteered with the Loveland Rotary Club, raised scholarship money for the Loveland Parks and Rec Department and gave time to Relay 4 Life, Larimer County Food Bank and the Boys & Girls Club.

Thomas Jefferson High School’s Avery Shunneson (14) rushes with the ball in the first half of the game against Denver North Friday, April 23, 2021 at All-City Stadium.

On the field: More than a few college football programs had their eyes on the 6-oof-1, 225-pound two-way star. And with good reason: Shunneson racked up 291 tackles (24.5 TFL), 9.5 sacks, three fumble recoveries and 918 total rushing yards (11 TDs) over his four-year varsity career. That included a 4A spring state championship season that saw him put up 652 yards, 60 tackles (3.5 for loss), one sack and one fumble recovery. Still, Shunneson is Princeton-bound, where he will compete for the track and field program as a thrower.

Off the field: Shunneson’s academics were nearly impeccable with a 3.95 unweighted GPA (4.78 weighted) that saw him graduate eighth out of a class of 284. He also served as a volunteer referee for YMCA soccer and basketball, helped build a sports court at a community center and participated in Tech for Seniors, which assists senior citizens with phones, computers and other technology. Shunneson is also fluent in Spanish and worked as an interpreter for the fishing outfitter “Zihuatanejo.” And when the TJ track and field team needed a throws coach, guess who stepped in? Mr. Shunneson.

Limon senior Kory Tacha (10) powers past defenders up the middle of the field during the 1A state football championships against Strasburg at the Neta and Eddie DeRose ThunderBowl in Pueblo on Saturday, Dec. 5, 2020.

On the field: A driving force in the Badgers’ 1A state title three-peat, Tacha almost never left the field as one of the team’s leading rushers, tacklers, punters and kick returners. On offense, he piled up 4,445 total yards (3,434 rushing) and 67 touchdowns (56 rushing) as a rushing and receiving threat. On defense, he totaled 207 tackles (18.0 for loss), five interceptions, two fumble recoveries and two forced fumbles. And on special teams he returned two kickoffs for touchdowns, one punt for a TD and even blocked a punt. Add it all up, and you get a three-time all-state selection and two-time 1A player of the year who’s bound for CSU in the fall.

Off the field: A three-year member of the National Honors Society, Tacha was ranked second in his graduating class with a 3.95 GPA. He served in Limon’s student council for four years with time spent as vice president, secretary and historian, played trombone in the school band and performed in his church’s band for the past six years. In addition, Tacha was a member of the IMPACT Youth Group for seven years, made annual mission trips to a Navajo reservation in Arizona and served on an advisory council for the Colorado Department of Public Health and Environment for four years.

On the field: A four-year starting quarterback for the Demons, Woolverton amassed 5,535 career passing yards (387-of-551, 59 TDs, 9 INTs), 7,223 total yards and 89 total TDs (passing, rushing, receiving, defense) during a highly decorated prep career. The CU preferred walk-on played four of seven games his senior year with a sprained AC joint in his throwing shoulder, but still threw for 1,010 yards and 12 TDs in leading Durango to the 3A fall state title. He also hauled in seven interceptions as a free safety on defense and averaged 40.3 yards per punt as the 3A state player of the year.

Off the field: Woolverton graduated a semester early with a 3.9 GPA so he could participate in the Buffs’ spring football practices. Prior to that, he spent time working with Durango’s unified basketball team, volunteered as a coach at Durango’s youth speed and conditioning camps for three years and mentored incoming freshman joining the football program. Woolverton also appeared at local elementary schools and did appearances by request for specific children, including one memorable instance when he granted an autistic child’s wish to meet and play football with him — a visit initially scheduled for 30 minutes that ended up lasting hours.