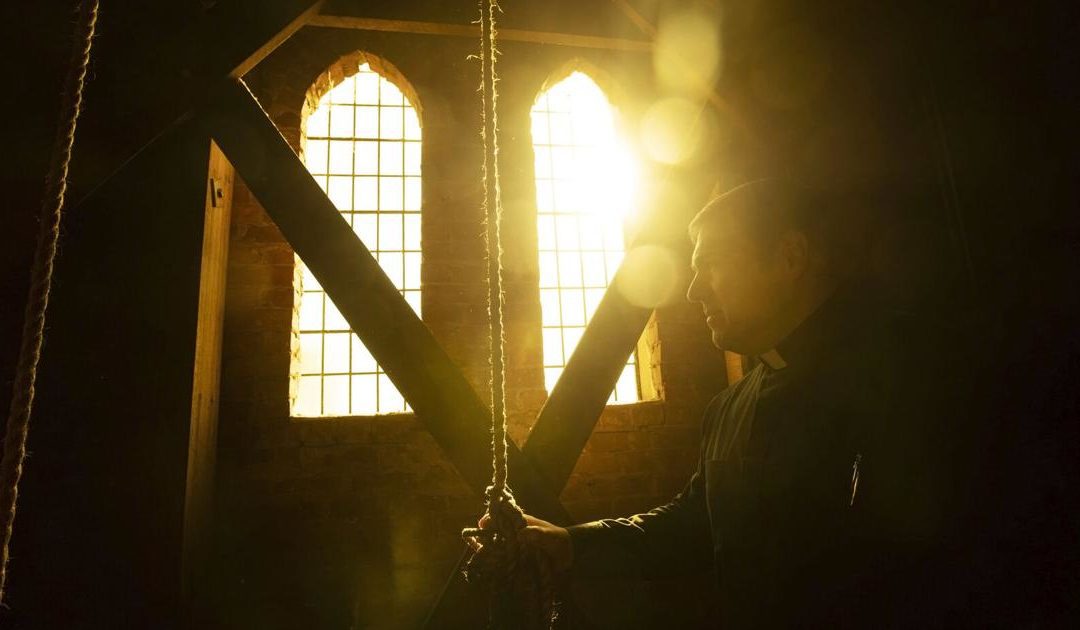 The Rev. David Price can think of only one thing he’s done in his eight and a half years as rector of St. Mary’s Cathedral that hasn’t drawn complaints.

Under his direction, the flagship church of the Catholic Diocese of Colorado Springs — which was dedicated in 1898 — has added a carillon. The computerized bell system enables melodious hymns, chants and seasonal carols to peal out at distinct times daily.

It’s music to the ears of parishioner Dick Eitel.

He lives less than half a mile from the downtown cathedral. Before automation, Eitel couldn’t hear the two original cast bells, which had to be rung manually by pulling on two long ropes that stretch from the bell tower to the main floor.

But now, he said he listens regularly for the pleasant chiming while relaxing at home.

“It’s comforting and calming to hear,” Eitel said. “It helps me refocus and concentrate on things that are important.”

That’s been the primary purpose of bells since they were authorized for use in Christian churches around A.D. 400. By A.D. 600, bells were a common fixture in European monasteries, according to historical accounts.

Ringing bells notified people that a service was about to begin, heralding field workers and others to get to the church on time.

Now, as then, they also are intended to cause people to pause for a moment and remember to connect with God.

Marc Lanning, business manager of St. Gabriel the Archangel Catholic Church, walks on the roof to the 76-foot-tall belfry of the church in northeast Colorado Springs on Friday, Dec. 17, 2021. The 152-year-old bells came from a church in Ohio that closed. They were installed in 2019 and dedicated in January 2020.

Those functions haven’t changed and are as important today as they were centuries ago, clergy say.

“It helps me to start Mass on time,” Price said with a smile.

And, as in the Middle Ages, “the purpose is to remind us to stop and pray,” he said.

People in medieval times also believed the sound of the bells was the voice of God and ringing them would cast out evil spirits throughout the lands, Price said.

The throwback custom also remains a form of public evangelization; the ringing often rises above the cacophony of traffic and can be heard by everyone in reach.

Most people don’t seem to mind or aren’t aware of their significance.

Church bells historically have had ecclesiastical and secular uses. For example, British Prime Minister Winston Churchill issued a World War II decree that church bells be silenced so that their ringing could be reserved to warn of enemy invasion.

The bells date to the late 1890s and early 1900s, one a steel masterpiece from a Sears Roebuck Catalog, the other a cast bronze church leaders purchased from an Ohio foundry.

An app on Price’s cellphone controls the computerized carillon, which rings in different pitches so that songs can play.

With a finger tap, he can immediately summon a funeral toll from the speakers as a casket emerges, or a wedding song as a bride and groom exit after the ceremony.

“It’s a modern convenience,” he says.

Altar servers miss being able to yank on the ropes to clang the bells before church services, he said. A few times a year, the ding-dong tones still happen manually.

Marc Lanning, business manager of St. Gabriel the Archangel Catholic Church, walks on the roof to the 76-foot-tall belfry of the church in northeast Colorado Springs on Friday, Dec. 17, 2021. The 152-year-old bells came from a church in Ohio that closed. They were installed in 2019 and dedicated in January 2020.

Peak City Church, a nondenominational congregation of about 800, has been in a strip mall off Academy and Dublin boulevards for seven months.

“We just don’t have bells in our church history or tradition,” said Derrick Purvis, executive pastor.

The congregation isn’t likely to add any, he said.

Neither is Springs Church, a nondenominational charismatic church in an auto mall in northern Colorado Springs. The building didn’t come with any bells, said a receptionist, so there simply aren’t any.

The 3,500 parishioners of St. Gabriel the Archangel Catholic Church in Briargate saved for 15 years to buy three used bells from a church in Ohio that closed, said Marc Lanning, business manager.

“We wanted some history in our building,” he said. “Neighbors call and thank us. They love the old-time tradition.”

The church opened in 2004, but the 152-year-old bells that cost $60,000 were installed in 2019 and dedicated in January 2020. It was so cold that the holy water sprinkled on the bronze bells during the ceremony immediately turned into icicles, Lanning said.

The bells came with names engraved on them — Peter, Johannas and Magdalena (from biggest to smallest) — which the church retained.

From the 76-foot-tall perch overlooking Pikes Peak, the bell tower also contains parts of the old wooden shaft that originally braced the bells and a wheel that would make a yoke turn to produce the sound.

Automated magnetic strikers are on a schedule to ring five minutes before Mass starts, at noon each day and other times for certain prayers.

“How beautiful!” “Majestic!” and “Love this so much,” were among the comments the church received on its Facebook page after the bells rang for the first time at the dedication.