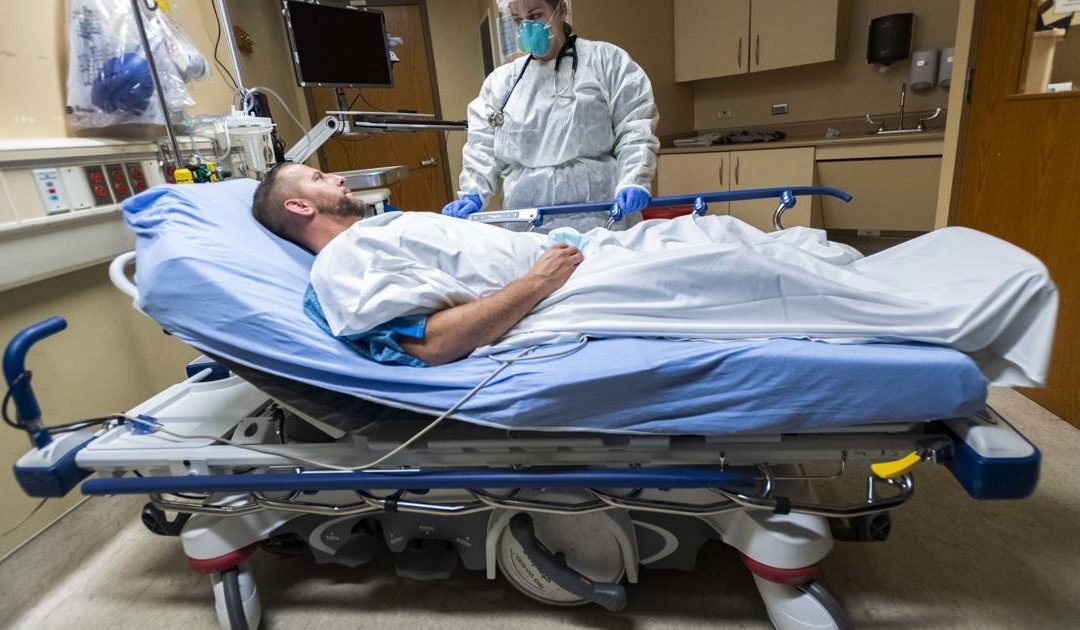 A team of Colorado medical experts is in the earliest stages of studying guidelines for triaging patients should the crisis hammering hospitals continue.

And members of the group indicated Thursday that the process may focus on discharging people who can safely leave the hospital, rather than solely prioritizing care for patients most likely to survive.

The document is the triage portion of the crisis standards of care, a series of guidelines for hospitals to follow should resources — such as staffing or bed space — become significantly scarce. Last updated in March 2020, the triage plan outlines how hospitals should allocate limited resources to which patients, and how to objectively choose.

The experts convened Thursday to discuss a revised draft of the standards, and they will submit feedback for the initial document over the next 48 hours. Another draft is expected to be completed early next week, and officials emphasized repeatedly that the document presented Thursday was an early draft and would face an array of changes.

“I think you’re all aware of the state we’re in right now with the expanding pandemic cases and the stress on hospitals,” Eric France, the state’s chief medical officer, told the assembled emergency medicine and ethics experts, “and that we’ve activated the crisis standards for staffing and may need to activate crisis standards for medical care and hospitals.”

The triage standards have never been activated during the pandemic, even during the late-2020 peak. But hospital capacity in Colorado is at its most limited point yet, and state projections suggest capacity could be overwhelmed by the end of December. While officials seek to add 500 more hospital beds by that time to avoid overwhelming facilities, the activation of the triage standards “unfortunately may be forthcoming,” Steve Cantrill, a Denver Health emergency physician, said Thursday.

The state is “doing everything possible to avoid having to enact crisis standards of care for hospitals and acute care facilities,” Jessica Bralish, spokeswoman for the Department of Public Health and Environment, said in an email Thursday. Coloradans can mitigate the risk to hospital capacity, she said, by getting vaccinated and, for those who received their jabs months ago, through booster doses.

Though the previous standards plan described a dire situation in which patients more likely to live would be given care over others, the focus has now flipped, said Matt Wynia, the director of the Center for Bioethics and Humanities at the University of Colorado. He told the group the focus now is likely to be on keeping less sick patients out of the hospital or out of intensive care beds if that can be safely done.

Under that framework, he continued, patients who can safely be sent home will be, with direction to see their own doctors or seek outpatient care. That would free up bed space for patients who need inpatient treatment. In normal circumstances, emergency physicians tend to be “risk (averse),” said Anuj Mehta, a pulmonary physician at Denver Health and the author of this early draft. They may admit patients even if they’re “borderline” in need of a bed, just to be safe. Under the draft standards under consideration, those decisions would be weighed more carefully and intentionally to preserve bed space.

Mehta emphasized that the standards are “meant to be transparent, equitable, respectful and fair” for everyone, regardless of age, race, ethnicity, ability to pay, insurance coverage or other nonmedical factors. A patient who turns up in the hospital won’t be turned away because of those factors, he said, and “scoring systems” used to help inform decisions about a patient’s condition can cut down on bias that may be more present if humans made those decisions without that information.

Critically, any activation of the crisis standards would not apply to just COVID-19 patients; it would cover the range of people who turn up to hospitals seeking some form of treatment.

Mehta and Wynia both said that under this new focus, socio-economic factors must necessarily be included in final decisions. Should hospitals begin discharging less-ill patients and instead direct them to outpatient care, then that patient’s ability to actually access that care is a key element.

In addition to scoring systems that can guide decisions, Mehta said hospitals should have triage teams that include the facility’s ethics department, hospital leadership, nurses and physicians. They shouldn’t have existing relationships with patients in question, to avoid any potential personal bias. He said a standardized approach mitigates that risk, and facilities should consider implicit bias training to further address its potential impact.

None of the providers who spoke Thursday expressed interest in using someone’s COVID-19 vaccination status as a factor in deciding whether to triage a patient. Claire Uebbing, an emergency medicine physician and vice president with Centura Health, expressly said vaccination status shouldn’t be a consideration.

Mehta agreed that “COVID vaccination, at least now, should not be part of this algorithm.” Patty Mayer, the director of clinical ethics at Banner Health, wrote in the virtual meeting’s chat that she, too, felt that “vaccination status should not be used at present.”