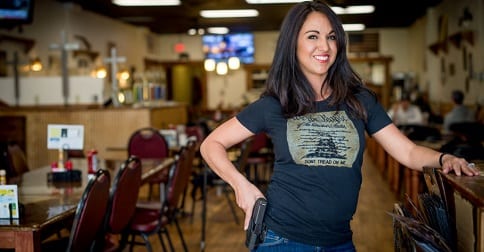 Congresswoman-elect Lauren Boebert, R-Colo., got a quick lesson on how the pro-Second Amendment right is treated in Washington when she made what an aide described as a “private inquiry” about House rules.

Billed by the Associated Press as “a brash pro-gun activist who straps a Glock pistol to her hip,” Boebert was elected to Congress this month from western Colorado, after defeating incumbent Rep. Scott Tipton in the Republican primary. She criticized the lawmaker for not being a strong supporter of President Donald Trump.

As far as the corrupt media establishment goes, being pro-gun and pro-Trump are two strikes right out of the gate, and the AP ran with this ominous headline: “Gun-toting congresswoman-elect may carry Glock at Capitol.”

Of course, the pearl-clutching left may be in for a surprise to learn she would not be the only member packing heat if she did opt to do so, as the news agency noted “the practice is allowed for lawmakers, with some limitations, under decades-old congressional regulations.”

It does appear that lawmakers are not permitted to bring weapons into the House chamber and other nearby areas, and the article said that the public is barred from carrying firearms in the Capitol, its grounds, and office buildings.

Fittingly, Boebert is from the small community of Rifle, and she runs a gun-themed restaurant called Shooters Grill.

Boebert aide Laura Carno played down all the hoopla over whether her boss will carry a firearm or not.

“This was a private discussion and inquiry about what the rules are, and as a result the Congresswoman-Elect won’t be going on the record,” Carno said in an email last week, according to the AP.

Capitol Police would not comment on the number of lawmakers who carry firearms, but the department told Democrats on the House Committee on Administration in a 2018 letter that “there is no standing requirement” that lawmakers notify them when they carry a firearm in the Capitol, the news agency added.

To get a feel for what to expect from Rep.-elect Boebert, she responded to a story on the incident by tweeting: “Our Constitutional right to bear arms exists even in places that reject this fundamental principle.

Our Constitutional right to bear arms exists even in places that reject this fundamental principle. https://t.co/QEOQo0WHCa

And if that wasn’t enough to propel conservatives to like her, perhaps a tweet about her encountering House Speaker Nancy Pelosi is.

“I must say, her hair looked great! Wonder where she’s getting it done these days…,” she deadpanned.

I saw Speaker Pelosi in person while I was in DC.

I must say, her hair looked great!

Wonder where she’s getting it done these days…

No surprise, Boebert was attacked by gun-grabber Shannon Watts, the head of the Bloomberg-backed Mom’s Demand Action, who misrepresented some petty charges from her past — some of which were dropped entirely.

Lauren Boebert has been arrested four times – including altercations with police – and is under investigation for “unlawfully providing a handgun to a juvenile” who worked at her restaurant. Not exactly a law-abiding gun owner. https://t.co/cjHI6KIpyJ

Here’s a quick sampling of positive responses to the story from Twitter:

So proud of this woman

John McCain was not that cool

And D.C. is the crime capital of the world, in more ways that one.

The longest-tenured writer at BizPac Review, Tom grew up in Maryland before moving to Central Florida as a young teen. It is in the Sunshine State that he honed both his passion for politics and his writing skills.