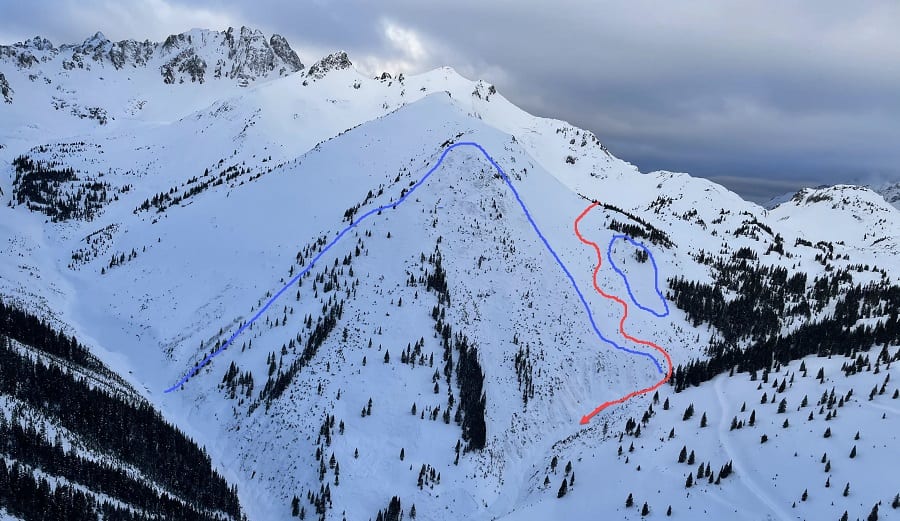 CAIC: “An overview of the accident site. The red line marks the general path of the group, down the slope and then down the gully. The blue lines mark the approximate boundaries of the avalanche. The large avalanche on the left caught the group of skiers. The small avalanche on the right released sympathetically.” Photo: Telluride Helitrax.

The entire U.S. got absolutely hammered by snow in the past week. Last Wednesday, an atmospheric river opened up on the western states, dropping over seven feet of snow in just two days on Mammoth Mountain in California, and yesterday, two to four inches of snow fell per hour in the Northeast, blanketing New York City in snow, and delivering the largest snowfall in two years to D.C..

Sadly, so much snow at once makes for dangerous skiing and riding conditions, especially in the backcountry. On Monday in Colorado, a group of seven skiers were in an area known as “The Nose” near the towns of Silverton and Ophir, when an avalanche was triggered, burying four of the seven skiers. This same area is where an avalanche claimed the lives of two skiers in December. The remaining three skiers were able to locate and rescue one of the victims, but were unable to locate the other three in their group. A search, was launched later in the day on Monday, but was put on pause Tuesday evening due to unstable and dangerous conditions. The search will have resumed today, but is now a recovery mission instead of a rescue mission, with little hope for survivors after being buried in snow for two days.

Ethan Greene, director of the Colorado Avalanche Information Center (CAIC) commented that the skiers were, “well-equipped to be there,” in other words, we’re not dealing with newbies getting themselves into dangerous situations. At the time, the avalanche rating for the area was “considerable.” Avalanche hazard in the U.S. and Canada is rated on a five-point system consisting of: Low, Moderate, Considerable, High, and Extreme. Interestingly, the most dangerous rating is not Extreme but Considerable, because there is still a potential for avalanches but people are more willing to go out and test their luck than if the rating were higher.

In the backcountry near Park City, Utah on Saturday, two skiers triggered an avalanche, burying one of the skiers, Kurt Damschroder, 57, a local resident. The second skier was able to uncover Kurt and attempt lifesaving efforts, but was forced to abandon the effort as conditions deteriorated and the extreme avalanche danger prevented any professional rescue efforts until after nightfall. His body was recovered on Sunday. Family remembers him as a warm and creative soul, whose fun-loving energy was infectious, a local obituary read.

And it wasn’t just the backcountry that was dangerous. Both Mammoth Mountain and Sun Valley, Idaho saw deaths related to the massive influx of snow in the past week. At Mammoth, a skier was found by other resort guests buried upside down and unresponsive on Thursday. Despite lifesaving efforts from Mammoth Ski Patrol, the 52-year-old from Oceanside, Calif. was pronounced dead at the Mammoth Hospital.

In a similar chain of events on Friday at Sun Valley, Idaho (which received three feet of snow during the same storm that brought seven feet to Mammoth), skiers at Sun Valley Resort found 67-year-old Gregory Plowman buried and unconscious on Sun Valley’s Bald Mountain. Plowman was still alive when he reached the hospital, but died in intensive care around 6 p.m.

The post Massive Snowfall in Western U.S. Brings Deadly Avalanches to Utah and Colorado first appeared on The Inertia.