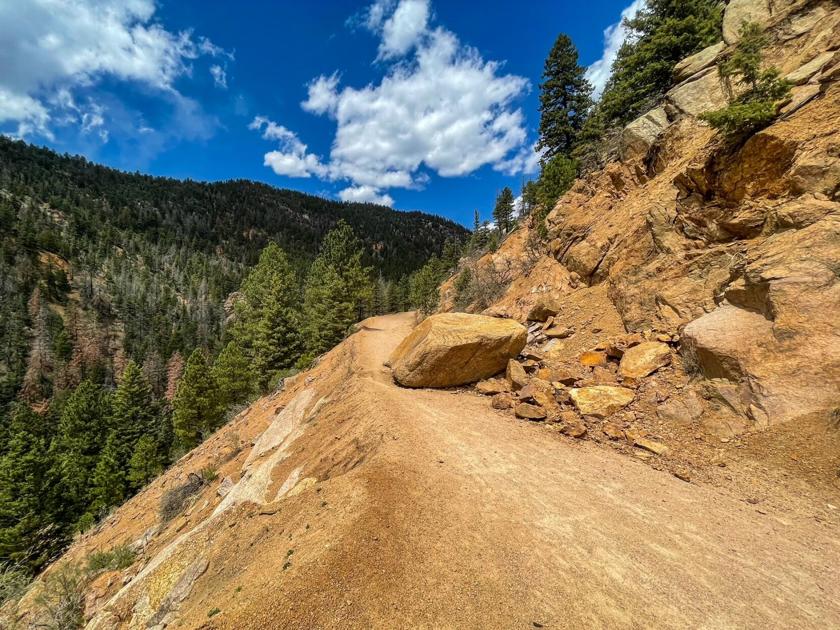 One of the most popular spots for outdoor recreation in Colorado Springs has seen relief from vehicle traffic over the past month thanks to a massive fallen boulder blocking a key road in the area. Now, that boulder is set to be removed, met with mixed reactions from the local community.

On April 25, a large boulder fell in North Cheyenne Cañon Park, blocking Gold Camp Road. This resulted in a closure of the road to vehicles with a decision made to keep the road open to hikers, bikers, and some smaller OHVs. As might be expected, overall traffic in this part of the canyon was greatly reduced with visitors reporting an experience not common in Colorado Springs for years.

Overcrowding in this stunning canyon has long been a pain point for those heavily involved in outdoor recreation in Colorado Springs, with weekend scenes featuring cars parked illegally and visitors failing to respect local rules. Easy to access and filled with great trails that range from beginner to expert in difficulty, it’s no surprise this spot is popular and getting more crowded with each new resident that moves to Olympic City, USA.

In fact, overcrowding in this area had become such an issue that major steps were being made to help accommodate for the growing popularity of the spot. Had the boulder not closed Gold Camp Road on April 25, the road would have been closed on May 3 at the start of a major $320,000 construction project meant to add parking spots and improve the sustainability of a key trailhead lot in the canyon. Other ideas, such as a shuttle service, have also been considered to help mitigate traffic.

When the road was closed due to the fallen boulder, the situation was met with praise from some who felt as if the limited traffic in the canyon was for the best. Some in this group voiced voiced hopes that the boulder would prove too difficult to remove, thus would permanently stay put. Others wanted the boulder to be removed quickly to allow for the canyon to again be accessible. The decision was made to get rid of the boulder, though the removal would prove to be no simple task.

After about a month of planning and deliberation, the US Forest Service has announced that the boulder will be removed on Friday, May 28, with partial closures put in place on May 27 as crews stabilize the slope above the boulder with delays expected for those in the area. The public is asked to avoid the area while this process is underway. A popular trail, Upper Columbine Trail, will also be closed at this time, as this is located downslope of where the boulder is on the road.

It is unclear if the road will immediately reopen to vehicles upon the removal of the boulder. It’s also important to keep in mind that the boulder removal could last multiple days if complications occur.

The closure on North Cheyenne Canyon Road will continue until the parking lot construction is complete. That closure was initially expected to last through May 28, though this is subject to extension.

Read the official press release on the boulder removal here.