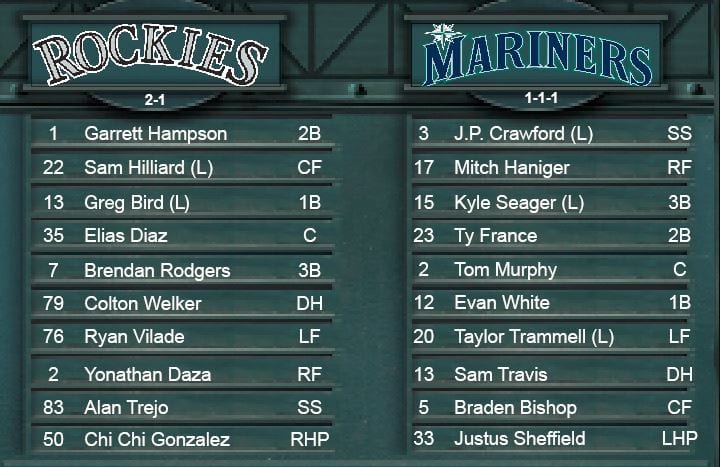 TODAY’S TILT…the Mariners return home to Peoria Stadium to face the Colorado Rockies…finishing off a stretch of 3 home games in the first 4 games before a stretch of 3 road games over the next 4 contests…Seattle is coming off an 8–8 tie yesterday at the Cubs, in which both teams recorded 8 runs, 9 hits and 3 home runs.

POWER SURGE…the Mariners hit 3 home runs in their third Cactus League contest after going homerless in the first 2 games…Jarred Kelenic hit the first home run in the top of the 4th, a 2-run blast to left-center field off Brandon Workman…Taylor Trammell hit a solo home run in the 5th off Jason Adam…in the top of the 9th down by an 8–6 score, Jack Reinheimer hit a game-tying 2-run homer off Tommy Nance, who was tagged with a blown save.

VS. COLORADO…the Mariners and Rockies have met 71 times in Spring Training action, with Colorado looking to knot up the all-time series with Seattle currently owning a 36–35 advantage…the clubs last met on March 2, 2020, a 9–6 COL win at Peoria Stadium…prior to that contest, last meeting was Feb. 24, 2019 at COL, a 4–2 Mariners win.

ROLL WITH THE CHANGES…due to COVID-19 protocols, Cactus League teams have the ability to “roll over an inning” (effectively ending it) after a pitcher has thrown 20 pitches…after the Mariners first 2 spring games witnessed 3 combined instances of “rolling an inning” (2 in the first game, 1 in the second game), Wednesday’s game at Sloan Park included 4 instances, a pair from each team…Mariners pitching “rolled” the bottom of the 4th and 6th innings, while Cubs pitching “rolled” the top of the 5th and 8th innings.

Mariners GameDay — March 4 vs. Colorado was originally published in From the Corner of Edgar & Dave on Medium, where people are continuing the conversation by highlighting and responding to this story.