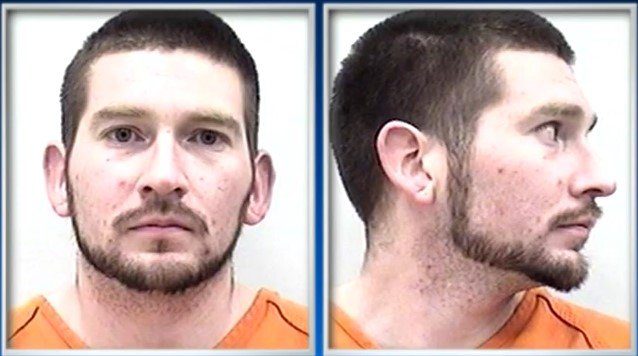 COLORADO SPRINGS, CO – A manhunt is underway for the motorcyclist who shot an officer in Colorado Springs on Friday night.

Mr. Joseph Aaron Sedillo, a 25 year old resident of Colorado Springs, is wanted for Attempted First Degree Murder for an incident that resulted in a CSPD officer being shot (Press releases 2106-03 and 2106-04). pic.twitter.com/OIOMxNVJFM

An arrest warrant has been issued for 25-year-old Jacob Aaron Sedillo of Colorado Springs. He is charged by detectives with attempted first-degree murder.

Sedillo is described as a white Hispanic male, 5’11” tall, about 165 pounds, with brown hair and green eyes. He was last seen driving a motorcycle away from the scene of the shooting.

Sedillo is considered armed and dangerous.

Details are sketchy at this time, but police have released the following information regarding the shooting.

An officer made a traffic stop with two motorcycles around 8 p.m. Friday night in the parking lot of an Autozone store on N. Nevada Avenue. When the officer approached the riders, Sedillo shot at the officer before fleeing on the motorcycle.

The second rider did not flee and remained with the officer.

The injured officer was not able to return fire. He was transported to a local hospital where he is listed in stable condition. Reports indicate the officer was treated for a gunshot wound to the arm.

The officer has not been identified.

Reaction to the shooting on Twitter has garnered a number of messages of support for the officer and the department.

“Ok peeps get him. Make him wish he never shot that cop. I hope the officer is doing well.”

Ok peeps get him. Make him wish he never shot that cop. I hope the officer is doing well.

Another user said he had seen enough violence against police:

“Help find this punk! It is not okay to attack our Police Officers.  Enough. COLORADO SPRINGS, we are better than this.”

Help find this punk! It is not okay to attack our Police Officers. Enough. COLORADO SPRINGS we are better than this.

The Colorado Police Department issued a statement saying that their homicide detectives have assumed the investigation, and asked the public for help:

“On Friday, June 6, 2021, at approximately 8 p.m., an officer with the Colorado Springs Police Department contacted two suspicious motorcycles in the parking lot of 3010 North Nevada Avenue. During the contact, one of the motorcycle riders fired a weapon at the officer, striking him at least one time.

The suspect then fled the scene, while the other motorcycle rider remained. The officer was not able to return fire and was transported to a local hospital where he remains in stable condition.

“Detectives from CSPD’s Homicide/Assault Unit responded and assumed responsibility for the investigation. This is being investigated as an attempted homicide of a police officer.

As the officer did not discharge his weapon, this will not be investigated by a deadly force investigation team (DFIT) but will be handled by CSPD

“Updates will be released in the future as appropriate. This is still an active and ongoing investigation.”

Colorado Springs police say an officer was shot in the arm after contacting two motorcycle riders in a parking lot Friday night. https://t.co/2adDSBx5Ky

DENVER, CO – It appears that due to the ongoing pandemic, there has been a sort of de facto loophole inadvertently created that is seeing alleged drunk driving cases getting dismissed in the courts in Colorado.

And the reason being has to do with the manner in which field sobriety tests are being administered – or rather, not administered.

Collateral impact of #COVID19 – some Colo. police departments(@jeffcosheriffco @AuroraPD @CSPDPIO @DenverPolice ) refuse to give breath test to DUI suspects, even though @CDPHE says its safe,
leading to dismissal of some cases. @CBSDenver Investigation:https://t.co/j8IMEQ5qqE

Most everyone knows what the run of the mill field sobriety test looks like: an amalgamation of tests related to balance, multitasking and the ilk.

But there’s also one crucial piece of evidence that helps solidify every alleged case of driving under the influence: the field breathalyzer test.

And the Denver Police Department, reportedly among others in the state of Colorado, have stopped administering field breathalyzer tests. The reason being is due to concerns of creating transmission risks during the pandemic.

“It’s important we have accountability for people who choose to drive while impaired as well as [making sure] we’re not unnecessarily or unduly spreading COVID-19.”

And as a result of these practices, some cases have been getting dismissed recently in the courts, essentially due to officers refusing to offer suspected DUI drivers a field breathalyzer test.

Jay Tiftickjian, a defense attorney in Denver who handles DUI cases, commented on this situational dilemma:

“Police officers have to do their jobs according to the law and when they don’t, cases get thrown out… Drivers who may be under the influence or impaired will get off on this issue.”

According to state law, police are supposed to offer suspected DUI drivers one of two means of documenting their BAC: either via a breathalyzer or a blood test. However, under “extraordinary circumstances”, certain forms of administering the field sobriety tests can be declined.

The Denver Police, Aurora Police, the Jefferson County Sheriff’s Office and the Colorado Springs Police Department have all collectively determined that COVID-19 and the potential of spreading it would fall under an “extraordinary” circumstance.

But that appointed classification by the aforementioned law enforcement agencies is in contrast with the Colorado Department of Public Health and Environment, which has deemed that administering a breathalyzer test during the pandemic is safe.

A case that was recently dismissed in January exemplified the caveats of this juxtaposed position on administering breathalyzers during the ongoing pandemic.

Charles Fife explained the January case where his client was told he had to submit a blood test when he asked for a field breathalyzer:

“Without being offered a breath test, my client still demanded a breath test. [The Officer] refused to give client his breath test – which is his right, guaranteed under the statute. At the motions hearing the prosecutor argued COVID fell into the classification of ‘extraordinary circumstances.’ The Judge disagreed.”

A similar situation happened during a December 2020 administrative hearing involving a woman suspected of a DUI back in October.

This woman’s driver’s license was on the line during this hearing, but the hearing officer in that case dismissed the matter, noting that concerns over the pandemic are not, “extraordinary circumstances which prevented the completion of a breath test.”

Jeff Groff, who reportedly oversees breathalyzer testing for the state department, notes that his agency cannot compel any law enforcement agency to administer breathalyzers, but he wants to point out there’s no data suggesting they’re unsafe to administer:

“There’s nothing out there… I have no reason not to believe it’s not safe. So I think that performing a breath test on these instruments is no more risky than going to 7-Eleven and using your ATM card and the Pin pad.”

Groff says that so long as officers are wearing PPE while administering a breathalyzer, maintain social distancing, and are not sharing a confined space with someone using a breathalyzer – then they should be fine.

There are still several other law enforcement agencies in Colorado haven’t stopped administering the breathalyzer test, according to reports.

While it seems the aforementioned law enforcement agencies are sticking by their proverbial guns on this matter, local attorneys believe that this debacle will likely find it’s way into the courts to determine what police departments can do moving forward.