Man reflects on attack at Colorado Springs dog park: ‘A switch just went off in him’ 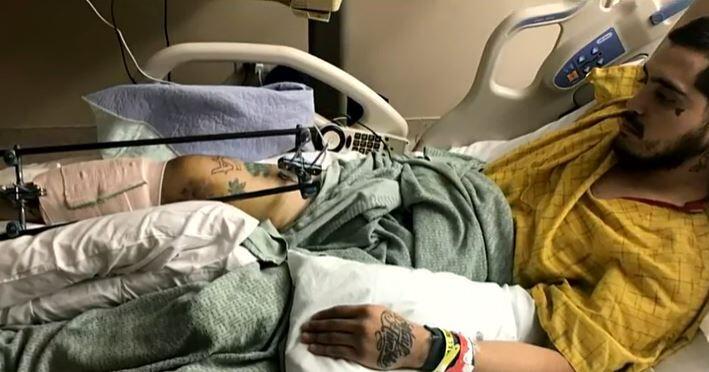 The 26-year-old arrived at Bear Creek Dog Park on Nov. 30 with his wife, Veronica Lopez, and their German-Doberman, Tiny.

The couple was getting ready to enter a playground-like area of the park when two huskies broke free from their owner and one of them began to attack Tiny, Ayala-Barrera said. He shoved the husky away from Tiny as it bit her neck, Ayala-Barrera said.

“A switch just went off in him,” Lopez said.

Lopez, meanwhile, was holding their dog back to protect it from the huskies, she said.

“This lady just grabbed him off me, just manhandled him,” Ayala-Barrera said.

A bystander began calling 911 and an ambulance came to take Ayala-Barrera to the hospital. The assailant was nowhere in sight, Ayala-Barrera said

On Tuesday officers arrested a suspect, 35-year-old Jack Tolar, on suspicion of second-degree assault. He was booked in the El Paso County jail on a $10,00 bond.

Tolar is scheduled to appear in court Dec. 15, according to court records.

“It makes me happy that there is justice,” Ayala-Barrera said. “No one deserves to be attacked.”

Ayala-Barrera and Lopez moved to Colorado Springs from Arizona just over a week before the incident, excited at the prospect of starting a better life, Ayala-Barrera said. He was set to start his job orientation with Two Men and a Truck the day after he visited the dog park. Now, he wonders if he’ll ever work again.

Lopez is preparing herself to be their primary source of income, working in internet provider Spectrum’s billing department, while Ayala-Barrera undergoes multiple surgeries, recovers and tries to rehabilitate his leg. A GoFundMe page was created by Teri Christman, who witnessed the incident.

“At the end of the day, it could happen to anybody,” Ayala-Berrera said.