Man gets submerged in human-caused avalanche in Colorado | OutThere Colorado 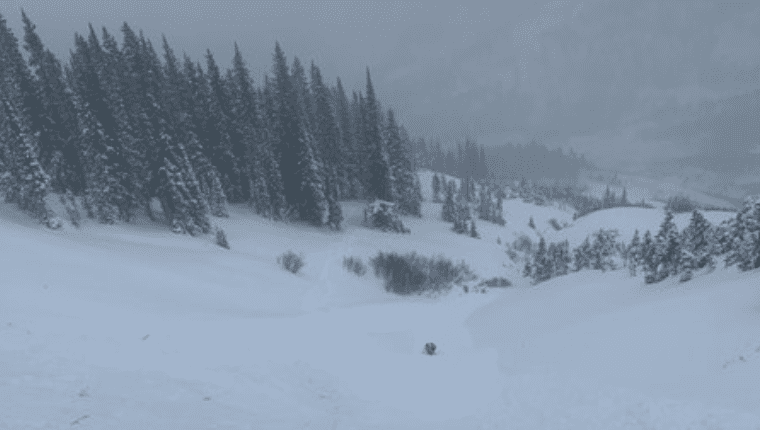 Those entering the backcountry, beware! Avalanche risk is already present in Colorado despite the lack of early season snow.

According to a user-submitted report on the Colorado Avalanche Information Center website, a skier was caught and briefly submerged in a human-caused avalanche that occurred on Monday near Marble, Colorado.

Estimated at 100 feet wide with a run of about 200 feet, the avalanche occurred in a small gully near a grouping of trees at about 10,400 feet of elevation. As a skier was the first one to cross a steeper section of terrain, the slide broke off, carrying the skier downslope. The skier was uninjured and didn’t require any sort of official search and rescue effort.

While most of the terrain being crossed by skiers in the group at the time was lower angle, small sections of steeper slope were present. According to someone at the scene, ‘complacency’ was a factor, as much of the route being traveled was lower risk.

When the slide was triggered, the group was making the return to their car, having previously noted “major instabilities” at higher elevations. That being said, the terrain they were traveling just prior to the avalanche is described as having a “gentle slope angle” – so low-angle that it made it impossible to maintain momentum.

The author of the report made it a point to write: “This slide was a sharp reminder of the potential consequences of any backcountry terrain, even in the relatively benign areas that we traverse on approaches to and exists from the main ski runs.”

Those entering in the backcountry in Colorado should know that avalanche risk is already very present. This example also goes to show that low risk terrain can still have high risk areas and features that should not be overlooked.

Currently, the Colorado Avalanche Information Center rates avalanche risk in Colorado as moderate to considerable, levels two and three on a five-level scale. The most severe risk is found on the state’s southern and southwest mountains, though considerable risk is also present in the Aspen area.

Avalanche observation reports, which can be made by officials and the public, indicate that there have been 219 slides so far this season. Considering unobserved and unreported slides that have likely occurred, this number could be even higher.

Always check the Colorado Avalanche Information Center website prior to planning a trip into Colorado’s mountainous terrain and be aware of the current forecast by checking websites like weather.gov and opensnow.com. If you’re entering the backcountry this season, do so only with the proper training and equipment.