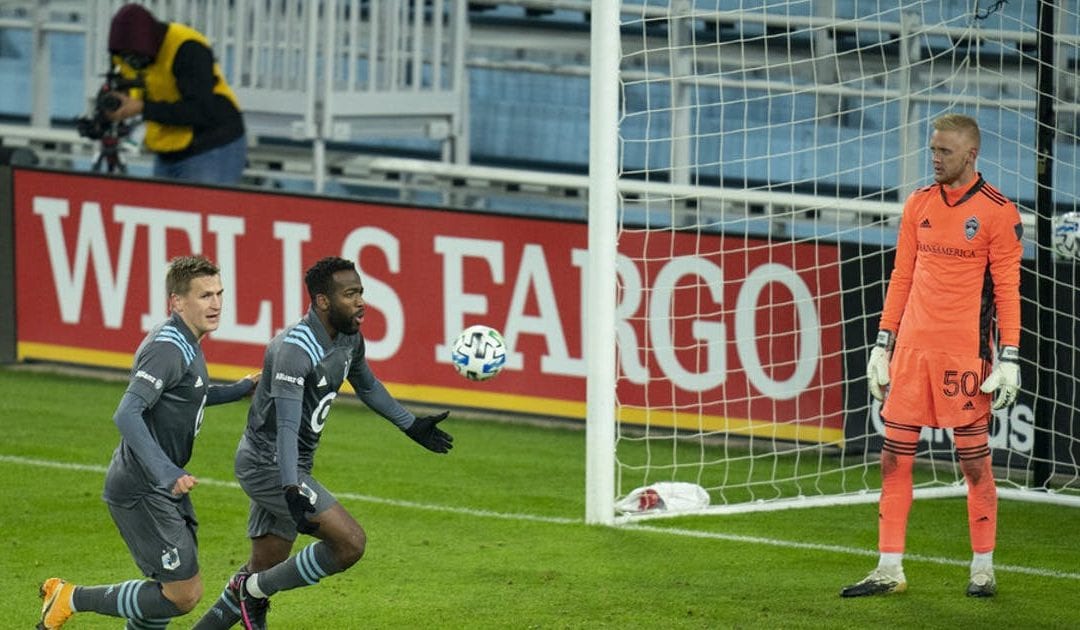 Minnesota United extended its unbeaten streak to a club-record nine games and won its first playoff game, too, with Sunday’s 3-0 victory over Colorado at Allianz Field.

The Loons will play at Sporting Kansas City on Dec. 1 or 2 in a Western Conference semifinal after Sporting withstood San Jose 3-3 Sunday in penalty kicks.

The Loons played with three players back from national-team duty. Finland’s Lod and Slovakia team member Jan Gregus started and Sierra Leone’s Kei Kamara was a second-half sub on a night starting right back Romain Metanire didn’t arrive in time from his return from Europe.

Runner-up to Los Angeles FC’s Bradley Wright-Phillips for the comeback award, Molino scored the game’s first goal in the 22nd minute after Colorado controlled much of the run of play until then.

Molino did so after he gathered a teammate’s long throw-in from the sideline and shuffled it to playmaking midfielder Emanuel Reynoso, who was knocked off the ball, but it went into Molino’s feet on a run into the 18-yard box.

He finished off quickly with a deft, left-footed shot that eluded goalkeeper William Yarbrough.

Reynoso could have, should have made it 2-0 in the 30th minute when Molino and Lod set him up for a shot dead ahead at an open goal that he almost casually aimed and somehow hit the right post.

Lod nearly scored just before halftime with a powerful, bending left-foot shot that foreshadowed his goal to come. Only this one bent just wide outside the far left post as Yarbrough watched flat-footed.

After halftime, Gregus saved a goal with a sliding tackle at the goal line that prevented the tying goal in the 52nd minute.

Two minutes later, Lod made it 2-0 with another bending, left-foot shot. This one came on the run after Reynoso sent ahead to him another perfectly aimed, angled pass that Lod turned into a shot directed past Yarbrough and just inside the far left post.

Loons goalkeeper Dayne St. Clair did his part, too, saving young Rapids star Cole Bassett’s driving shot just before that, one of a handful he turned away to keep another clean sheet.

Molino made it 3-0 in the 79th minute, finishing off with his right foot this time a combination play from Reynoso and Gregus for his 11th goal this season.

The two teams played to a 2-2 draw in group play at July’s MLS is Back Tournament in Orlando and then again late last month.

For the Rapids, that October contest was their second game back after they didn’t play for a month because five games were postponed by a COVID-19 outbreak in the team.

For the Loons, it was a very late 2-1 victory on an own goal — inadvertently off the head of defender Lalas Abubakar as he tried to head a crossing pass aimed in front of his goal out of danger and directed it past stunned goalkeeper Yarbrough instead.

It kept alive their hopes to win a first-round home playoff game, hopes they made reality with a Decision Day home victory over FC Dallas for fourth place.

The Loons on Sunday played a home playoff game at Allianz Field for the second consecutive year, 13 months after they lost 2-1 to a star-studded L.A. Galaxy team that included superstar Zlatan Ibrahimovic.

Heath was asked what he and his team might have learned from the playoffs the first time around.