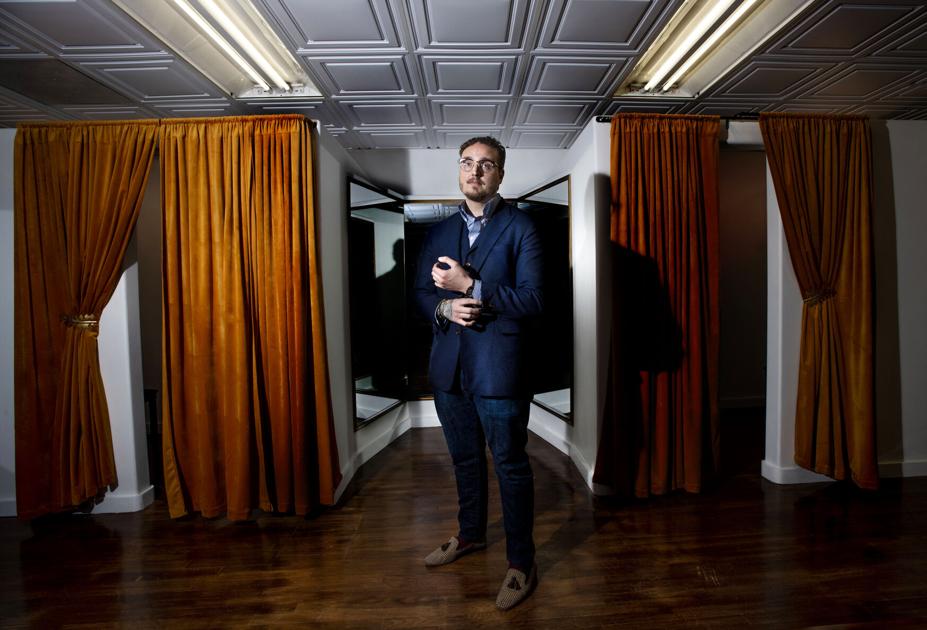 Inherent Clothier is a Colorado Springs-based custom men’s clothier, with a mission of not just making men look good but feel good. (Video by Katie Klann)

It was a tough time for Taylor Draper and his wife.

The relationship was strained, their marriage at a crossroads — “a stay or go kind of situation,” Draper says.

They decided to put in the work to save their relationship— and today, he says, they have “a great marriage and two beautiful children.” But therapy was hard. Sharing thoughts and emotions didn’t come naturally to Taylor; he had been taught to “man up” in a crisis rather than unleashing his feelings.

One thing that helped him get through that period a few years ago: his fashionable wardrobe.

“During that time of rebuilding and therapy,” he says, “I realized the only thing that was giving me any kind of confidence was my clothing. …  When I put on my suit in the morning, I was like, ‘Yeah, I can conquer whatever I need to.’ “

He commissioned some research and found studies linking dressing well with overcoming issues such as depression and anxiety. And thus the seed was planted for Inherent Clothier — a clothier with a mission of not just making men look their best, but feel their best as well.

“We chose the name Inherent,” Draper says, “because we believe confidence is inherent in every man, and that’s what our clothing is trying to bring to life is confidence in yourself.”

An assist from Hollywood

Draper, 32, came to Colorado Springs from Alaska as a teenager. Fueled by a longtime interest in design, he got a degree in graphic design from Pikes Peak Community College. He moved to Denver, working in graphic and web design and marketing; it was there he met his wife, Lynn. After they married, they came back to Colorado Springs, where they both had family. Draper went into business with his brother-in-law and they started Wolf & Key, a digital marketing agency. He sold his part of the business to start Inherent Clothier.

While already interested in men’s fashion and “the gentleman lifestyle,” he had plenty to learn in the months between when he registered the business in October 2019 and when he launched it in May 2020.

Draper took a deep dive into the industry, taking classes and having Zoom sessions with Italian tailors.

“I’m still learning every day,” he says, “but I learned a lot about  the tactile side of tailoring, the different fabrics. I had the owner of a fabric mill Zoom me for four hours; he sent me a box of fabrics and really took me through all of them.”

Inherent Clothier launched as an online business, with fittings done virtually; unfortunately, it launched at a time when the pandemic was taking hold, when men were staying home rather than heading to the office and were more likely to be in sweat pants than a custom suit.

“It was tough to get off the ground,” Draper said. “But at the same time, the stresses of the pandemic cast a spotlight on mental health — and people, he says, gravitated toward the idea of clothing and mental wellness.

One of those people was Janie Bryant, an Emmy-winning costumer designer known for her work on TV’s “Mad Men” and “Deadwood.” Bryant saw a press release on Inherent’s opening, was intrigued by its mission and contacted Draper. That contact turned into a collaboration with the release of Inherent’s Bryant Draper Collection.

It’s just a happy coincidence that Draper shares his last name with Don Draper, the protagonist played by Jon Hamm on AMC’s “Mad Men.” But it was also “a huge selling point” for Bryant, he says, who could thus use the name Draper in her line without infringing on the TV rights.

Bryant, in an interview with The Hollywood Reporter, cited her work on “Mad Men” and “Deadwood” as influences on the clothing line, as well as 1930s and ’40s styles and Hollywood filmmaking; one offering is the $1,295 Bogie Dinner Jacket.

“Taylor is such a huge fan of ‘Mad Men’ and I’m a huge fan of menswear,” Bryant told The Hollywood Reporter. “It’s like a dream come true for both of us.”

Inherent Clothier opened its first brick and mortar location in March in downtown Colorado Springs. It’s the first in a plan to open six stores in seven years, including one in Los Angeles, where Bryant can drop in. “Then in New York,” Draper says. “Maybe Atlanta. Then we’d really love to be over in London and France, and Milan as well.”

Those locations are big cities; Colorado Springs is not. But, he figured, “if I can make this work here, it will work anywhere. And this is my backyard; I love this city to death.”

Inherent largely sees two types of customers. One, Draper says, is men in the financial and real estate fields who are used to wearing suits and regularly update their wardrobes. “Then we have younger guys come in who are like, ‘I  didn’t know you could wear a suit like this or that a suit could look cool this way.’ “

Men used to rebel by not wearing a suit; now it’s almost the opposite, Draper says. “In the ’70s, there was a big movement of going up against ‘the man.’ The suit got such a bad rap. If you were wearing a suit, you were a corporate, stuffy guy, the representation of ‘the man.'”

In reality, he says, “A suit is the most versatile piece of clothing a man has available to him.” You can dress down — “I love the look of a blazer and jeans and a T-shirt and sneakers” — or you can shine in a full suit.

The first time he donned a custom suit, “it made me feel like a superhero,” Draper said.

And he knows others feel the same way.

“Every single time somebody buys from us, I get to see their whole demeanor change when I put that jacket on,” he said. “Their chest goes up a little bit higher, they’re sitting straighter, they get a big smile on their face. You can just tell the confidence is just pouring out of them.”

“It’s your suit of armor, if you will,” says Noah Bartron, store director. “It just leads you to being more confident and chasing down what you want in life.”

Draper’s goal is to make shopping at Inherent not just a transaction, but an experience.

“We don’t like it,” he says, “when someone just comes in and buys something without talking to us and leaves. We actually want to establish a relationship and get to to know them and help them build a lasting wardrobe.”

Bartron, who previously was a shop director in Connecticut, shares that goal; he relishes helping men figure out “what they could be and should be wearing,” based on their lifestyles and their goals. Barton was also drawn to Inherent’s mission of equipping and empowering men with custom menswear and accessories “with the purpose of raising awareness of men’s mental well-being.” (The Inherent website talks mainly of mental well-being and mental wellness and avoids the terms of mental health and mental illness, terms some find threatening or too confining, Draper says.)

Ten percent of Inherent Clothier’s sales go to the Inherent Foundation, a nonprofit that Draper helped form last year. The vision: “to see a world where men are not limited by the stigma of what it means to ‘be a man’ within their fight for mental well-being.” Among the foundation’s programs is Dollar Dudes, in which men donate $1 a week to a fund that helps others with the cost of therapy or other mental-wellness resources. The foundation also hosts “huddles, “a chance for “guys to get together and just hang out with other like-minded guys.”

“Our only rule for this is if you are asked how you’re doing, you have to be authentic about it,” Draper says. “You can’t just say good or fine.”

The idea is to provide a safe place to talk, which Draper hopes shopping at Inherent provides as well. While he says women are generally open to therapy and talking out their problems, he thinks men are more likely to bottle things up. Talking to your tailor as you’re getting measured can provide an opportunity similar to spilling out your problems to the bartender at your neighborhood bar.

“I really hope guys just feel like, one, this is a place they want to be in and hang out,” Draper says, “and two, they can trust in the quality of our clothing …. and feel confident in themselves.”