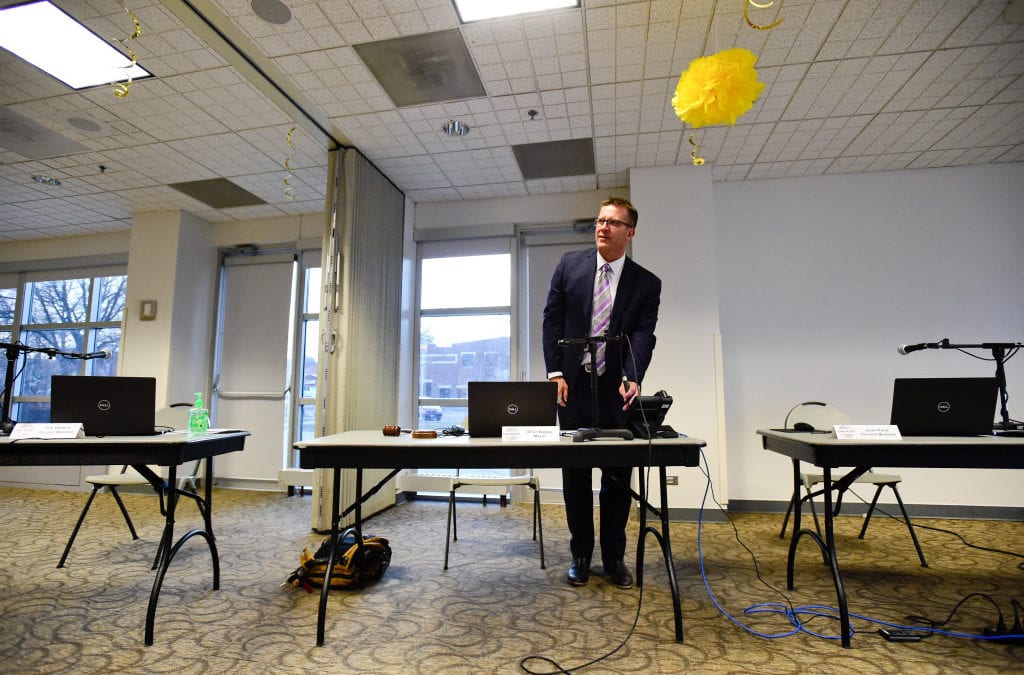 At one point during last week’s meeting, Bagley — who for weeks has openly objected to the effectiveness and long-term economic impacts of forced business closings and stay-at-home orders — appeared to suggest that now might be an appropriate time for people in low-health-risk categories to go ahead and risk exposure even if that might result in a trip to a hospital emergency room.

Particularly sparking many of Tuesday night’s criticisms were Bagley’s having said: “I want somebody to come over and spit in my mouth so I can get in the hospital now, because I’m not going to die” and because Longmont hospital intensive care units are not yet full.

Collyer Street resident Julie Steenburgh said in an email that Bagley’s “cavalier attitude toward the lives of your constituents will not be forgotten come reelection time. You should be recalled immediately. The fact that you are more worried about your bottom line than our lives will be remembered. I for one will be screaming it from the rooftops, and I know I will not be alone.”

Cedarwood Drive resident Eric Johnson said in an email: “The mayor is irresponsible and does not understand the current problem of coronavirus. You may have well said ‘let them all die.’ My MOTHER is in that group of highly vulnerable people. She’s been courageously fighting cancer for two long years.

“So we should let her die just so your little business can keep going without responding to a global pandemic?” Johnson asked Bagley. “I sure as hell will be voting AGAINST You in the upcoming election. Adios!!!”

Portofino Drive resident Adam Isaacs said in an email: “The mayor’s comments were disturbing, horrifying and disgusting in times such as these. He should be removed from his position for lack of ability to lead the community. He is NOT an epidemiologist, he is NOT a doctor, and he does NOT even seem to be informed on a basic level.”

Steenburgh’s, Johnson’s and Isaacs’ emailed comments, as well as others that Assistant City Managers Sandra Seader and Joni Marsh read aloud at Tuesday night’s meeting, were submitted in advance of the City Council meeting. That’s because members of the public cannot attend those sessions during the restrictions on assemblies that have been imposed to prevent COVID-19 disease virus exposures.

On Monday night, Denver KMGH-TV Channel 7 broadcast a news story and including Bagley’s comments, together with two local business owners’ criticisms of the mayor’s stance, along with Bagley’s defense.

“First of all, I was speaking with emotion and sarcasm, obviously I don’t want someone to come over and spit in my mouth,” Bagley told Denver Channel 7 reporter Adi Guajardo. “What I meant was there is room in the hospital” and that he would rather get sick, if that happens, now instead of later.

During last Wednesday’s Council meeting, the mayor suggested the national, state and local long-term adverse public health impacts of extended stay-at-home and business-closing orders might be worse than the initial illnesses and deaths from the COVID-19.

“I am not advocating that money is more important than lives or health,” Bagley said at that meeting. “I’m not saying this isn’t serious. I’m not saying that I’m going to violate” the stay-at-home orders, “or go rogue.”

Bagley said during the meeting “I’m going to follow the current orders, but this is only going to get worse, and it’s not going to be the virus that’s going to cause it.”

He predicted that people losing their businesses and jobs because of government-ordered closings and stay-at-home directives — extended periods in which people can’t afford to pay their rents or mortgages, or to pay for groceries or medical attention — could result in starvation, or subsequent mental health problems, including suicides.

On Tuesday night, Council members unanimously supported a version of a policy position suggested by Councilwoman Susie Hidalgo-Fahring — that Council members collectively support the coronavirus responses recommended by the World Health Organization, the Centers for Disease Control and Prevention, Boulder County Public Health, the Colorado Department of Public Health and Environment and Gov. Jared Polis and his advisers.

Hidalgo-Fahring said under such a policy, any Council member’s personal positions or viewpoints about responding to the pandemic “is solely our own position” not that of the entire Council.

Councilwomen Joan Peck and Polly Christensen applauded Hidalgo-Fahring’s motion with Peck saying it’s a good idea to give the public “some confidence in their leadership” and Christensen saying this is “an emergency time” when the council needs “to speak as one voice.”

Bagley told his Council colleagues they were being “very, very polite” in discussing Hidalgo-Fahring’s motion, since it obviously was the result of his comments last week.

However, the World Health Organization, the Centers for Disease Control, Boulder County Public Health and other Colorado cities’ recommendations have sometimes been “in conflict” with one another, Bagley said.

“I believe 100 percent we should follow the lead of the governor” and his orders and directives, Bagley said. He got Hidalgo-Fahring to agree to amend her motion to state that if conflicting policies or recommendations do arise, Longmont will “unequivocally support our governor” and Polis’ executive orders.

Hidalgo-Fahring then noted that Council members have been under a lot of stress and said, “Mayor Bagley, I’m worried about you.”

She suggested if Bagley felt a need to step back and take a break from running meetings and other mayoral chores for a time, he should do so.

“I am perfectly well,” Bagley said. “I am not going to resign. I don’t need a break.”

Monday night’s Channel 7 news story about Bagley’s comments had already prompted a number of Facebook postings by critics or supporters of those comments.

In one, Longmont resident and political activist Jake Marsing wrote: “One person’s opinion doesn’t, and shouldn’t, represent the view of our city. The mayor’s opinion here isn’t just elitist, it’s destructive and dangerous. We all recognize the economic danger we face. I understand that anxiety. What I cannot abide by is our city being represented in a way that encourages behavior that will get our residents killed. Longmont is better than this.”

In another Facebook posting, Ivone Bagley, the mayor’s former wife, wrote: “The health department’s job is to look after our health. It is a huge job, nonetheless, that is it. However, as a Mayor of Longmont, Brian Bagley’s job is to protect and ensure the OVERALL well being of our entire community. The economy, whether we see it or not, is a huge part of that well being.”

Bagley was unapologetic about continuing to raise questions about the timing and effectiveness of the shelter-in-place stay-at-home orders.

However, “my job as mayor is to look out for the long-term health of Longmont,” Bagley said. He said that’s why he’s been questioning the numbers and assumptions behind the orders.

“I want our political leaders to ask the question: What are the health consequences of shutting down our economy?” Bagley said. He said no one else appears to be asking those questions, but “I’m getting hammered for it.”