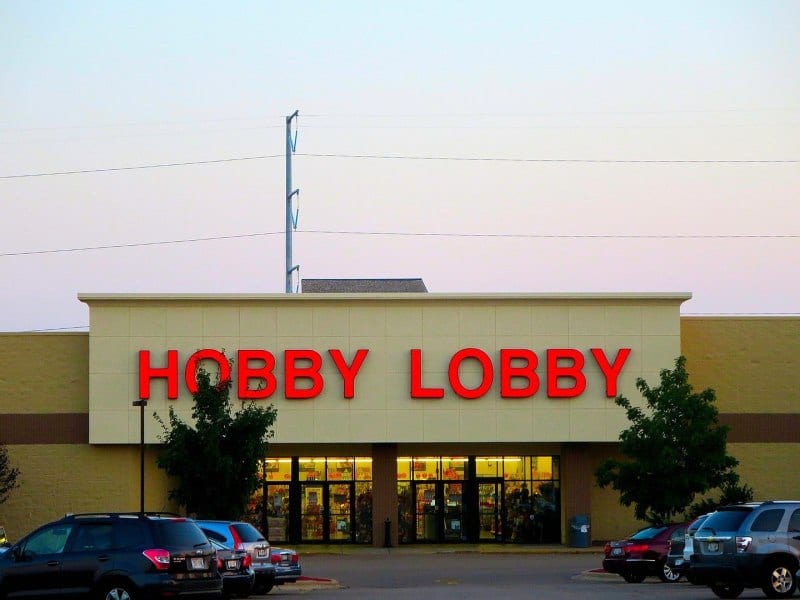 Dallas County Judge Clay Jenkins warned Hobby Lobby employees at a press conference that county officials were on their way and they should “lock up and leave as soon as possible.”

“I just want to make it clear to Hobby Lobby and anybody who is foolish enough to follow in their footsteps that in Dallas County, the government and 99.9 percent of businesses put public health over profits,” he said.

In Texas, counties’ elected chief executives are called county judges – they are administrative positions with no judicial duties.

Sheriff’s deputies arrived at store locations in North Dallas and Garland within minutes of the announcement and taped the cease-and-desist order onto the front doors. Shoppers at a Preston Road store said an employee instructed them on a loudspeaker to drop their merchandise and to leave the now-closed store.

A sign near the store’s entrance explained that Hobby Lobby was “operating as an essential business” and was “offering PPE mask supplies, educational supplies, office supplies and various components for at-home small businesses.”

“There are plenty of places to buy yarn in your neighborhood that are in compliance with the order,” he said.

Jenkins warned that violators of the order face up to six months in jail and $1,000 in fines per day.

“This is a slap in the face to the businesses that are following this order, that a few outliers are putting the community in danger,” Jenkins said. “If they have a lick of sense, they will close down before we get there.”

After the press conference, Jenkins asked citizens to report violators of the order at the county website.

“Do you know of any smoke shop, craft store or other non[-]essential business (not covered by @CISAgov) ignoring my #SaferAtHome order and putting profits over public health in your area?” he tweeted. “Report on http://DallasCountyCovid.org so we can shut them down ASAP. #FlattenTheCurve.”

Oklahoma City-based Hobby Lobby did not immediately respond to a request for comment after business hours Thursday evening.

Hobby Lobby’s refusal to remain closed has drawn the ire of authorities elsewhere, as well. Colorado Attorney General Phil Weiser sent a cease-and-desist letter Thursday demanding the closure of all locations in the state.

“For the avoidance of doubt, and as you have been previously notified, Hobby Lobby is not a ‘critical business,’” Weiser wrote. “You are directed to immediately close all Hobby Lobby locations within the State of Colorado.”

“Hobby Lobby properly closed its stores during Ohio’s stay-home order. Now they’re open again — what’s changed?” Yost tweeted Wednesday. “Neither the order, nor the seriousness of the health threat, for sure.”

Jenkins told reporters he was aware of Hobby Lobby staying opening in other jurisdictions, that his office is in regular contact with officials outside of Texas.