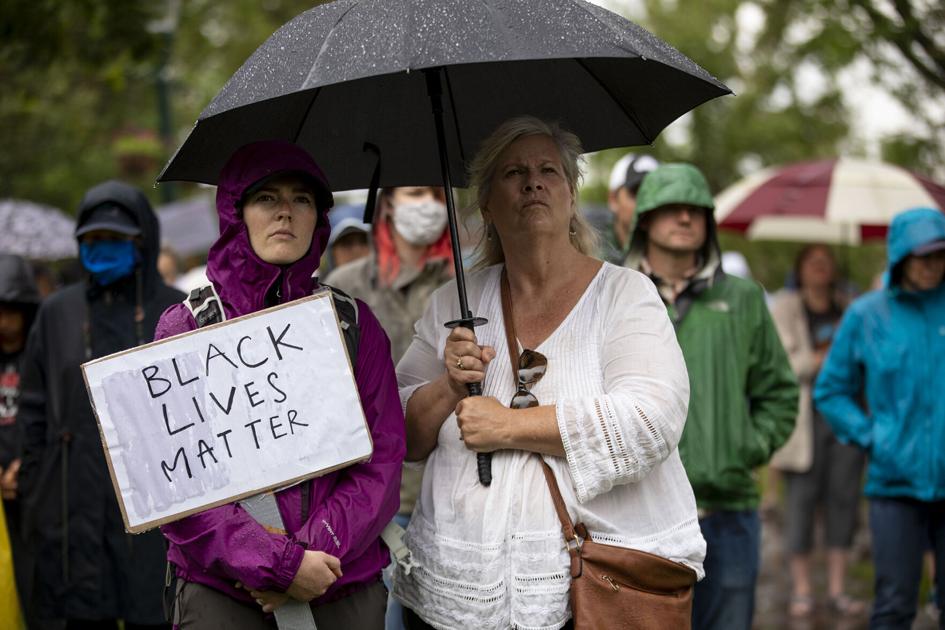 Updates from the 8th day of protests in Colorado Springs:

Hundreds of protesters marched under the bridge on Platte  Avenue Saturday evening, chanting, “Who got your back, I got your back”

POWERFUL. Protestors arm in arm marching under the bridge on Platte ave. “I’ve got your back” @KKTV11News #BlackLivesMattters pic.twitter.com/NCtPhi0Zso

Prayers and a call for unity and healing echoed through downtown Colorado Springs on Saturday morning during a prayer gathering at Acacia Park.

Local pastors Bob Bender of Cross Fellowship Church and Kelly M. Williams of Vanguard Church organized the event that drew hundreds of people in the wake of George Floyd’s death.

The gathering featured songs, prayers and speeches before participants walked through downtown.

“This came about, obviously, out of concern for our country and our city because of racial reconciliation,” Bender said. “The need for the church, the greater church, to come together as one to take a stand.”

Big crowd at a prayer gathering at Acacia Park for “racial healing” as rain falls.”We’re gonna go as long as the rain allows us,” a pastor said in leading the gathering.@csgazette pic.twitter.com/fsaTaGuxlA

The prayer gathering at the park is coming to a close. Participants are planning to walk through downtown and return to the park.

By about 2 p.m., protesters gathered at Colorado Springs City Hall, 107 N. Nevada Ave. Dozens of people are chanting “no justice, no peace” and holding signs in honor on Floyd.

A few dozen protestors have gathered at #ColoradoSpringsCityHall. They are chanting “No Justice, No Peace” and holding signs in honor of #GeorgeFloyd and to protest against police brutality.@csgazette pic.twitter.com/WMQzXrwZ9y

– Dozens of Buffalo police officers stepped down from the department’s crowd control unit Friday, objecting to the suspensions of two fellow officers in the shoving of a 75-year-old protester who fell and cracked his head.

Prosecutors were investigating the encounter captured by a TV crew Thursday night near the conclusion of protests over the death of George Floyd in Minnesota. The footage shows a man identified as Martin Gugino approaching a line of helmeted officers holding batons as they clear demonstrators from Niagara Square around the time of an 8 p.m. curfew. Read more here.

– A judge is limiting police use of tear gas, rubber bullets and other non-lethal weapons against people protesting against police brutality in Denver.

In a temporary restraining order issued Friday night, U.S. District Judge Brooke Jackson said four people who filed a class action lawsuit against the city accusing police of using the weapons to assert dominance and suppress their right to protest had made a strong case the police had used excessive force. Read more here.

For the 7th night in a row, protesters in Colorado Springs marched to protest police brutality and the death of George Floyd at the hands of Minneapolis police officers last month.

An estimated 200 protesters marched down Willamette Avenue Friday evening, chanting “I can’t breathe” and “hands up, don’t shoot,” before taking a knee at Bijou and El Paso streets.

The march followed 9 minutes of of silence outside of City Hall, where had protesters set up a memorial with candles, hand-made signs and flowers to remember those killed by police, including Breonna Taylor, a Louisville EMT who was killed in a police shooting in March. She would have turned 27 on Friday.

About 100 protesters stuck around past the city’s 10 p.m curfew, and at about 11 p.m., the protest wrapped up peacefully, with no confrontations with police. This was the third night in a row the nighttime protests in downtown Colorado Springs ended peacefully.

11:03 p.m. Protesters wrap up a third night of peaceful protests with no police contact.

Things are wrapping up now.In a final salute of solidarity the remaining protesters hold up lighters and flashlights in a moment of silence.“Let that be the last time we are silent.” #ColoradoSpringsProtest @csgazette pic.twitter.com/tfH7IU3kDY

Minutes before the 10 p.m. curfew in Colorado Springs, and protesters are taking turns speaking.

Open forum now for demonstrators to speak. Some powerful messages being echoed on the steps of City Hall.Many are not announcing their names, so I apologize if I cannot identify them, but I‘ll try to tweet out their message and video as I can. #ColoradoSpringsProtest @csgazette

Organizers say they will not tell people to go home at curfew, but they will be leaving at 10. They encourage those staying out to be safe. #ColoradoSpringsProtest pic.twitter.com/YvXQumRmNa

Demonstrators sing Happy Birthday to remember Breonna Taylor, and create heart symbols with their hands while gathered on the steps of City Hall.

Protesters throw up hearts on the steps of City Hall in memory of victims of police brutality. #ColoradoSpringsProtest @csgazette pic.twitter.com/rIdL0jTYbs

Demonstrators sing Happy Birthday to #BreonnaTayor again, and cheer loud and proud to “make sure they know we are here.” I’m sorry it’s dark, but numbers have at least doubled since I arrived at City Hall tonight. #ColoradoSpringsProtest @csgazette pic.twitter.com/yFggLk5gps

The march is on. We are currently walking East (I think) on E Willamette. #ColoradoSpringsProtest @csgazette pic.twitter.com/mtrqUuOREQ

Demonstrators wished #BreonnaTayor a happy birthday (she would have been 27 today) and participated in a 9 minute moment of silence to honor #GeorgeFloyd. #ColoradoSpringsProtest @csgazette pic.twitter.com/fVLzo4jqMh

Jaz fixes a sign on a memorial outside City Hall. Candles, hand-made signs and flowers sit at the feet of Lady Liberty in rememberance of victims of police brutality. #ColoradoSpringsProtest @csgazette pic.twitter.com/F9J5PmCIlu

#BLMprotest: I’m here at City Hall for the 7th night of protests in Colorado Springs. I estimate 150+ are here following a brief storm passed through downtown with more joining. @csgazette #ColoradoSpringsProtest pic.twitter.com/DGSyYaKnxb