Littwin: If Gardner loses, where does that leave Colorado’s already troubled Republican Party? 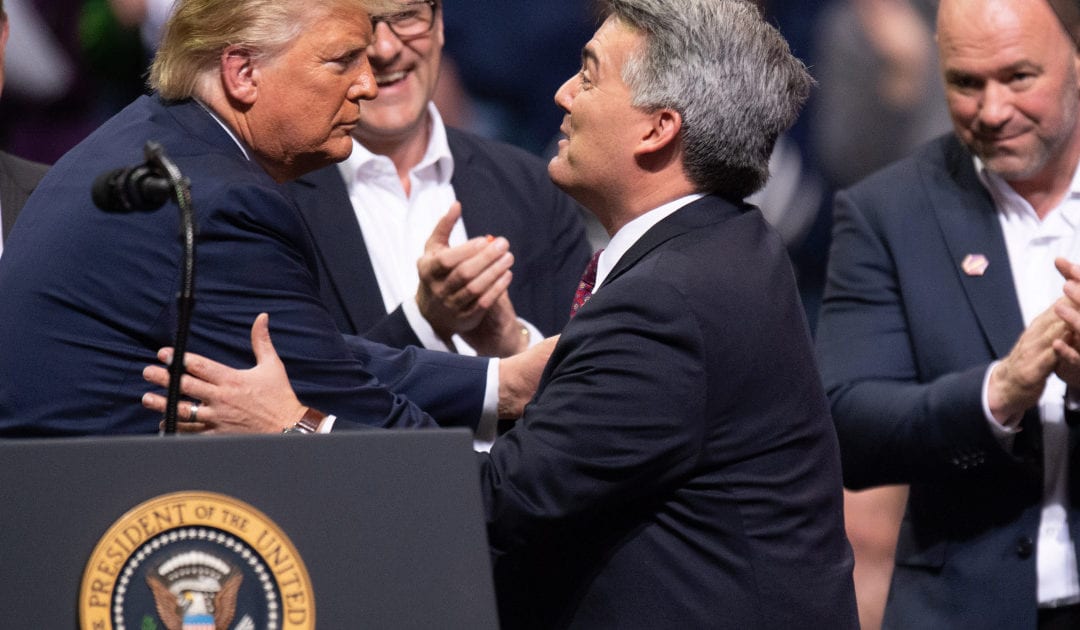 Our question for today is what will become of Colorado’s Republican Party if Cory Gardner, as many expect,  loses his Senate seat to John Hickenlooper? I mean, besides, in what should be the first order of business, kicking Ken Buck out as party chair.

And as a follow up, couldn’t Gardner, a talented politician after all, have run a different kind of campaign, conceding there are grave issues with Donald Trump, as he said himself in 2016, but that a bipartisan — his word, not mine — senator and Republican Senate would help keep Joe Biden and the Democrats in line?

I bring this up only because there was a piece in the Denver Post the other day about national Republicans pulling back on the Gardner race, which was, of course, inevitable. Dick Wadhams warned me of that months ago, saying if Gardner didn’t pick up his poll numbers that national Republicans couldn’t afford to play here. Dave Flaherty, a much-respected Republican pollster has pronounced the race “over.”

According to those poll numbers, which show him trailing around 10 points, and according to nearly every political analyst, Gardner is now, at best, a longshot. Running on the same ticket with Trump has to be too much for any Trump-enabling statewide Coloradan candidate to bear.

And the fundraising numbers? As Democrats across the country are chalking up funny-money fundraising totals, John Hickenlooper pulled in $22.6 million in the 3rd quarter as opposed to Gardner’s $7.8 million. As the great Sandra Fish reports in the Sun, what makes this remarkable is that the $7.8 million smashes Gardner’s best-ever three-month total and yet is just more than a third of what Hick raised.

I’m old enough — hell, it was just 16 years ago in 2004 — to remember when Colorado was a deeply red state and was generally assumed to remain a deeply red state for the foreseeable future. That future, it turned out, lasted only two years. In 2006, Ken Salazar was elected senator, and Republicans have won only one top-of-the-ticket race in Colorado since.

That lone victory was Gardner’s in 2014 when he edged Mark Udall in a wipeout Republican year nationally, selling himself as bipartisan candidate.

What could Gardner have done differently this time? I’m not sure. I’m positive, though, he should not have gone to that February Trump rally in Colorado Springs and have his picture taken while hugging Trump. I’m also sure that Gardner must have believed, and not without reason, that pulling away from Trump would mean a significant percentage of the Republican base would no longer support him. The real danger wasn’t a primary — which might have been been nasty, but which Gardner would have certainly won — but that the base would simply walk away.

And yet, Gardner had votes he could have taken but instead stayed true to the boss. There was the Senate impeachment trial, in which Gardner could have voted to call witnesses while still voting not to convict. There were the many repeal-but-don’t-replace Obamacare votes in which Gardner could have said he’s not voting to end Obamacare until Trump and Senate Republicans can present an actual, real-life alternative. He could also have said there is nothing to suggest in his experience that mail-in balloting leads to fraud beyond the borders of Colorado. But he didn’t do any of that.

Instead, he tries not to mention Trump at all, except when asked, and he has chosen to try to convince people who have been electing Hickenlooper for 16 years that he is a crook. Hick has problems. He did violate some Amendment 41 rules. He is not a crook, and most Coloradans — again, if you believe polls — agree he’s not a crook.

But Gardner knows what happens to Republicans who even occasionally cross Trump. Just Friday, Trump threw Susan Collins, whose seat is extremely vulnerable, under the bus because she is expected not to vote to send Amy Coney Barrett, who could be the deciding vote on Roe v. Wade,  to the Supreme Court. It’s a seat Republicans can’t afford to lose — and Collins has compromised herself in dozens of ways not to alienate the Trump base — but Trump always puts personal loyalty ahead of the political necessity.

And then there was a story, in the Phil-Anschutz-owned Washington Examiner, about a Sen. Ben Sasse private conversation with Nebraska GOP constituents, in which he trashed Trump in no uncertain terms. I’ve never talked off the record with Gardner about Trump because, I guess, Gardner hasn’t talked to me at all in many years. I have had a number of off-the-record conversations, though, with people who know Gardner well, and these recorded comments from Sasse might provide a hint of what a great majority of Republicans, including Gardner, actually think.

“The way he kisses dictators’ butts, Sasse said. “I mean, the way he ignores the Uighurs, our literal concentration camps in Xinjiang. Right now, he hasn’t lifted a finger on behalf of the Hong-Kongers.”

“The United States now regularly sells out our allies under his leadership, the way he treats women, spends like a drunken sailor,” Sasse continued. “The ways I criticize President Obama for that kind of spending; I’ve criticized President Trump for as well. He mocks evangelicals behind closed doors. His family has treated the presidency like a business opportunity. He’s flirted with white supremacists.” …

And yet, Sasse, too, has a voting record of strongly supporting Trump. I wonder where these Republican go if Trump loses next month.

In the final Gardner-Hickenlooper debate, the two candidates were asked yes-no questions, including whether they considered their rival ethical and moral and then whether they considered Trump ethical and moral. Hick said yes about Gardner and no about Trump. Gardner said no about Hickenlooper and yes about Trump. That pretty sums up the election right there.

I have to note, too, that Gardner, in the yes-no questioning, said he opposed Amendment B, which would end the complicated Gallagher amendment, which controls property tax rates. Ninety percent of rural legislators want Gallagher gone, as do many other prominent Republicans, including Hank Brown, Mike Coffman, Walker Stapleton, Wayne Williams and John Suthers. This was a chance for Gardner to go bipartisan on an issue that Trump doesn’t even know is an issue, and yet he did not, even though it would greatly help rural communities.

Gardner’s good friend, GOP strategist Josh Penry, who is pushing for Amendment B from the Republican side, told me he was disappointed in Cory, but that he doesn’t think it will matter in the Senate race (he’s right), but that “there are a lot of firefighters, shop owners, sheriffs, and for that matter teachers and nurses in flyover country who think their voice should matter, too.”

As Penry explained, “The effective property tax rate on a small business in Walsenburg is already nearly twice as high as San Francisco, LA , and DC, but still you’ve got these self-styled defenders of the free enterprise system shrugging their shoulders at a $300 million property tax hike on small business in the middle of all these shutdowns.”

If in the worst, but not unlikely, case that Gardner loses and Democrats keep both houses of the legislature and possibly even win a majority on the CU Regents Board for the first time in 40 years, and Jared Polis, who is cutting ads for Hickenlooper, is the most popular politician in the state, where would that leave state Republicans?

As late as 2016, Colorado was seen as a possible swing state. In 2012, I believe Colorado was considered by many to be a must-win, tipping-point state. Now there are as many as a dozen states considered possibly in play — even Texas is thought to be closer than anyone expected — and Colorado is nowhere among them. And thanks to our antediluvian Electoral College system of electing presidents, that means Colorado voters get no say in who is elected president. You need two effective parties in your state to be a purple state. It’s looking more and more as if Colorado has only one.