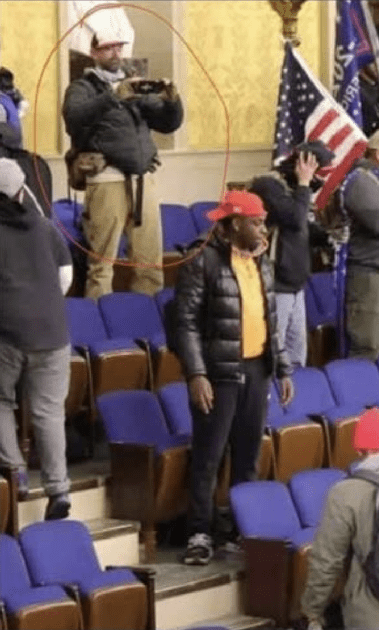 A Littleton man has been arrested after posting numerous photos of himself participating in the Jan. 6 riots and storming of the U.S. Capitol, according to an FBI criminal complaint.

Montgomery, a hunting guide at Pmonte Outdoors, is the fifth state resident to be arrested for participating in the Jan. 6 violent protests at the Capitol that left five people dead.

According to the complaint, the FBI received tips from multiple people identifying Montgomery in photos taken inside of the Capitol. Tipsters also provided screenshots of Montgomery’s social media posts placing him inside  the Capitol.

One of the screenshots shows Montgomery posted a photo of the Senate Chamber on Facebook with the caption, “We stormed the Senate…opened those Chamber door for Transparency!”

Montgomery also posted photos of himself traveling to Washington and outside the Capitol building Jan. 6.

When one person commented on Montgomery’s Facebook post and informed him they would be reporting him to the authorities, Montgomery replied, “Got nothing to hide.”

A different person emailed Montgomery about reporting him to the FBI, the complaint said. Montgomery responded that he is “not a scared cat” and he has “the best Federal Defense lawyers in the country.”

In the email, Montgomery also claimed he didn’t enter the Capitol violently, saying, “My group was let in peacefully by the police we were talking to with respect. We came a[n]d left peacefully before the anarchist and Antifa showed up breaking shit and being hoodlums.”

The FBI has gone on record saying there is “no indication” of involvement from Antifa during the Capitol riots.

All of Montgomery’s social media posts about Washington and the Capitol have since been deleted.

He was expected to appear in court Tuesday afternoon, according to court records.

In addition to Montgomery, Harlan Boen from Frederick and Stanley Williams from Englewood were arrested in Washington D.C. on the day of the protests. Both men were armed and are facing charges of carrying a prohibited weapon.