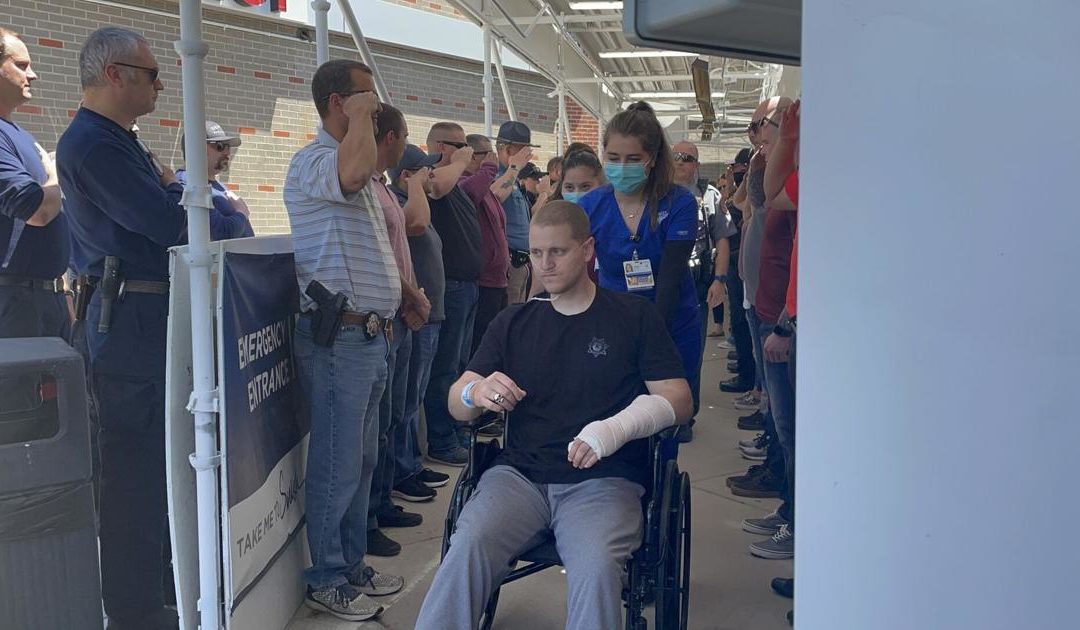 The Lincoln County sheriff’s deputy shot Thursday near Limon was released from Swedish Medical Center in Englewood on Tuesday afternoon.

Deputy Michael Hutton emerged to applauding members of law enforcement. Hooked up to oxygen and with his arm bandaged but able to stand on his own, Hutton got into his own patrol car to leave the hospital.

He suffered three gunshot wounds to his hand, arm and shoulder. The Lincoln County Sheriff’s Office tweeted at the time his condition was stable but serious.

According to the sheriff’s office, Hutton responded to a call early in the morning about a theft in progress  near Interstate 70 and Highway 40/287, just south of Limon, and was ambushed by the suspect.

After being shot, Hutton hid safely and was able to provide self-care.

“There are three things in law enforcement that we strive to do every single day: We serve our fellow man, we protect our community, and at the end of the day we go home,” said Lincoln County Sheriff Capt. Michael Yowell. “We missed the other night, but today we fulfill that third one and we get Deputy Sherifff Mike Hutton home.”

The suspect later died of a self-inflicted gunshot wound. He was found about 1,000 yards from the scene.

Hutton has been with the sheriff’s office for seven years and served in the United States Air Force.

As a small department, Colorado State Patrol Cpl. Ivan Alvarado said the Lincoln County Sheriff’s Office feels the squeeze of Hutton’s absence. He said other local law enforcement departments, such as the sheriff’s departments in Kit Carson and Elbert Counties, have offered manpower.

“I’m pretty sure he’s going to be back to work as soon as he can. He’s definitely not going to stay home for long,“ Alvarado said.

“It could have been completely different. And just seeing him come out and be able to stand up and get in his car just gives you a lot of relief [about] how it turned out.”

A GoFundMe for Hutton’s family had raised just more than $11,000 at around 2 p.m. Tuesday.