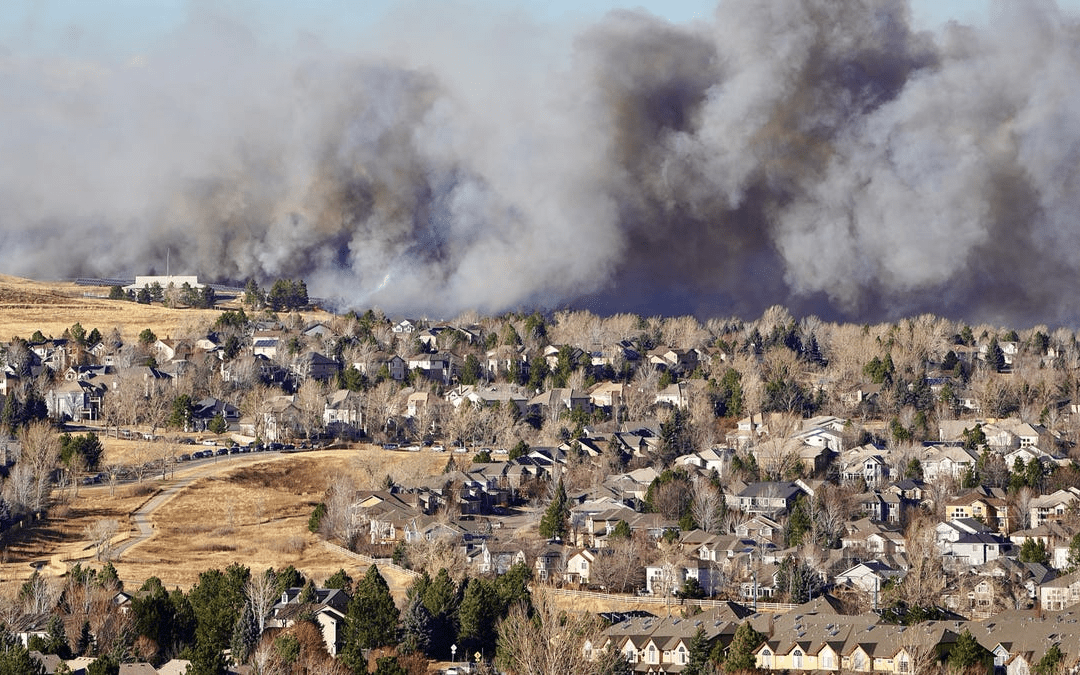 BOULDER, Colo. — Thousands of people were asked to flee their homes Thursday as several wind-driven wildfires burned near Boulder, Colorado, blanketing the area in smoke and setting vehicles and buildings on fire.

The National Weather Service called it a “life-threatening” situation, as one gust of 110 mph was reported in the region. Colorado Gov. Jared Polis declared a state of emergency Thursday afternoon to allow the state to access emergency funds and services.

On Thursday afternoon, a cloud of dark gray smoke could be seen blowing over the town of Superior, located about 20 miles northwest of Denver.

The entire town, which has about 13,000 residents, was ordered to evacuate because of a fire that spread northwest of town, according to a notice sent to residents.

The town of Louisville, Colorado, with some 20,000 residents, was also ordered to evacuate due to the fires. “If you’re in the area, please act quickly,” the Boulder Office of Emergency Management tweeted.

In the old town area of Superior, multiple buildings and vehicles were on fire, including an Element hotel. Video streamed by 9News showed a home engulfed in flames in Louisville.

Six people were hospitalized with burns at UCHealth Broomfield Hospital, spokeswoman Kelli Christensen told USA TODAY. She could not elaborate on their conditions or the severity of burns due to HIPAA, a healthcare privacy law, but said all six were being treated currently.

By 3 pm, flames appeared to have safely bypassed the Rock Creek neighborhood and Atlee Flora, 18, grabbed a bucket to begin extinguishing small grass fires burning in the area.

“Our house was totally engulfed in smoke for a while,” he said. “I think we will be okay.”

Flora and his family had temporarily evacuated the area earlier but returned once the immediate danger appeared to have passed. He first kicked dirt on a flaming portion of a neighbor’s fence and then returned with a bucket, dousing the flames that had reignited.

Boulder County Office of Emergency Management has just announced an Evacuation Order for ALL of Superior, Colorado residents. Evacuation point is the South Boulder Recreation Center. The Superior Community Center is not an official evacuation location.

A bystander video shot outside a Costco in Superior shows winds whipping through barren trees in the parking lot with gray skies and a hazy sun as small fires scattered across the ground.

Leah Angstman and her husband were sitting on a bus going toward Boulder, and Angstman recalled instantly leaving clear blue skies and entering clouds of brown and yellow smoke.

“The wind rocked the bus so hard that I thought the bus would tip,” she wrote in a message to The Associated Press.

The bus had to pull over and they waited a half-hour until a regional transit authority van escorted them to a turnaround on the highway. There she saw four separate fires burning in bushes across the freeway, she said.

“The sky was dark, dark brown, and the dirt was blowing in swirls across the sidewalk like snakes,” she said.

“Prayers for thousands of families evacuating from the fires in Superior and Boulder County,”Polis said in a Tweet. “Fast winds are spreading flames quickly and all aircraft are grounded.”