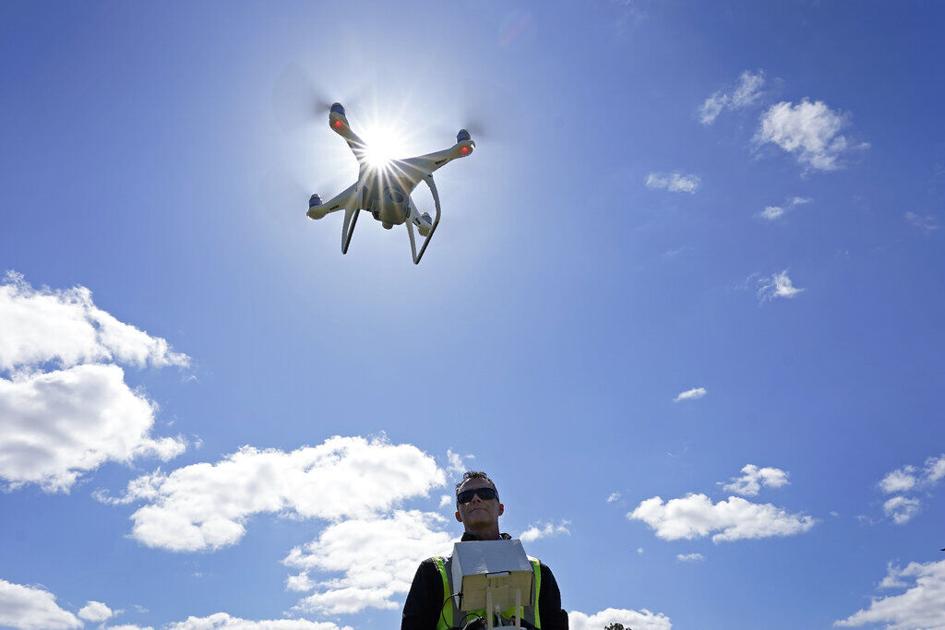 According to an officer in the El Paso County Sheriff’s office “property lines don’t extend into the sky” in reference to a drone that was found behind someone’s home recently.

Property lines do extend vertically, to some extent. If your neighbor’s tree branches are hanging over into your property you have a legal right to cut the encroaching branches off, even with your property line — no matter how high the tree is.

As for drone/UAV operations there are “gray areas”, one of them being the airspace above private property. The FAA has mostly stayed away from this issue for both commercial and recreational drone/UAV use; however, they are being pressured into ruling on this matter mainly due to the requested use of drones/UAVs for package delivery. The FAA should also include recreational drone/UAV operations in any ruling concerning operations over private property. There have been a few Supreme Court rulings over the past 50 years that have set some precedents on this matter, mainly in the form of an opinion.

So I’ll just say this — do you think it’s right for a person to be gardening; playing with your kids; or just relaxing in your backyard and then have a drone come flying/hovering 10, 20, 30 or even 100 feet above your backyard? I might add that it is against FAR 101/107 to operate a drone/UAV overhead any non-participating person(s), so I feel this would apply to my backyard.

In response to Bruce Fogarty’s letter to pronounce Colorado a low tax state, complete with Tax Foundation analysis to support it, I can tell you that at least in Colorado Springs local taxes are significantly higher than they used to be.

Neither side trying for unity

Regarding David Baker’s letter — where is the “unity” that Biden and Dems promised, or is that forgotten already? I am sorry to report that either side of the aisle is not trying too hard to achieve this, but looking at one side only shows me that Baker has no interest in achieving this either! “Hypocritical Republicans and group of phonies!” Your Democratic party is exactly the same — power and greed do this to many people, maybe more in politics?

I absolutely abhor the Jan. 6 riot that the Dems are investigating but where is the investigation and the arrests of the BLM riots that occurred in several cities that destroyed stores, businesses, cars etc.? Several Dems blew that off as “…letting off steam!” Also Baker wrote “… Republicans are supposed to be the party of law and order…” where does that leave the Democratic Party as no Republican governors but only Democratic governors want to defund and did defund their police departments!

You certainly do not believe that the Republicans only are the liars, cheaters, and greedy hungry for power folks in this world, do you?

Or do you, like others, hate former President Donald Trump so much that you can’t see the forest for the trees?

You are what you make yourself

Now normally I would not do this, but I’m sitting here watching a show that’s talking about racism. White people have done this, white people have done that, to keep every other color down. It’s been two days since I heard a comment watching fireworks with my 12-year-old granddaughter next to a group of people. One said “I hate white people” and talked about Billy Bob setting off fireworks in his corn field burning it up this little group of 20 year olds and younger just laughed.

As I remember going to to school, everyone had the same opportunity as me. Some went on to make it some didn’t. I was one not to by choice. If I applied myself who knows the outcome of my life.

It don’t matter what color or race you are, you are what you make yourself. It’s time to stop the blame game and take responsibility for yourself. I’m a white woman married to a Mexican that had the same opportunity — he had more playing sports. Take responsibility for yourself stop the blame game it don’t matter if you grew up in the hood or on a cow farm your life is what you make it nobody else’s.

I want to commend you for your recent coverage of CRT throughout El Paso County and Colorado.

The pieces I have seen, including coverage of D-49 school board’s vote to ban CRT and The Gazette Editorial dated June 28, 2021, have been fine examples of fair reporting with no political partisanship, elements which are missing from the awful mainstream media news.

Thank you and Bravo to professional journalism.