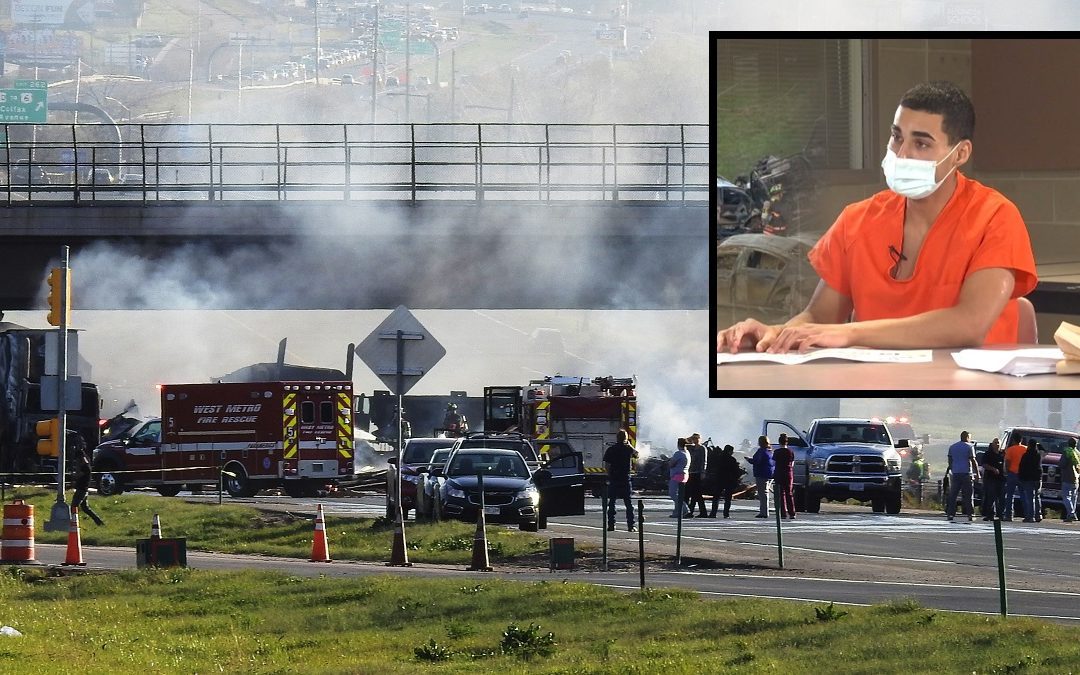 An online petition has gathered millions of signatures calling for leniency for a 26-year-old truck driver who was sentenced to 110 years in prison for vehicular homicide in an explosive accident at the base of a Colorado mountain highway that killed four people in 2019.

More than 4.5 million people had signed the change.org petition urging Gov. Jared Polis to grant clemency or commute Rogel Aguilera-Mederos’ sentence by Tuesday, The Denver Gazette reports. Truckers nationwide have voiced outrage over the sentence on Twitter, using the hashtags #NoTrucksToColorado and #NoTrucksColorado, among others.

Download our local news and weather app for Apple or Android— and choose the alerts you want.

The Democratic governor’s office said it would welcome an application, while Aguilera-Mederos’ attorney told KDVR-TV that a request could take time because the sentence was just handed down Dec. 13.

Aguilera-Mederos was convicted in October of vehicular homicide and other charges stemming from the April 25, 2019, crash. He testified that he was hauling lumber when the brakes on his semitrailer failed as he was descending a steep grade of Interstate 70 in the Rocky Mountain foothills.

His truck plowed into vehicles that had slowed because of another wreck in the Denver suburb of Lakewood. He was traveling at least 85 mph (137 kph) on a part of the interstate where commercial vehicles are limited to 45 mph (72 kph).

The chain-reaction wreck involving 28 vehicles ruptured gas tanks, causing a fireball that consumed vehicles and melted parts of the highway.

Prosecutors argued that as Aguilera-Mederos’ truck barreled down from the mountains, he could have used a runaway ramp alongside the interstate that is designed to safely stop vehicles that have lost their brakes. Aguilera-Mederos testified he was struggling to avoid traffic and to shift his truck into lower gears to slow it down.

In imposing the sentence, District Court Judge Bruce Jones said it was the mandatory minimum term set forth under state law — and suggested a lesser punishment was warranted. Mandatory minimum sentencing laws required that sentences on 27 counts of vehicular assault, assault, reckless driving and other charges run consecutively.

“I will state that if I had the discretion, it would not be my sentence,” the judge said.

First Judicial District Attorney Alexis King, whose office prosecuted the case, filed a motion asking the court to schedule a hearing to reconsider the sentence, her office said Tuesday. The motion states that Colorado law allows reconsideration “in an exceptional case involving unusual and extenuating circumstances” but didn’t elaborate.

Prosecutors are consulting with victims in the case to get their input prior to any proceedings, the motion states.

King had said after sentencing she would welcome a reconsideration of the punishment. But she also told The Denver Post that Aguilera-Mederos didn’t accept efforts to negotiate a plea deal, and that the convictions recognized the harm caused to victims of the crash.

Polis’ office issued a statement saying that “we welcome an application from Rogel Lazaro Aguilera-Mederos and will expedite consideration but have not received one yet at this time.”

Aguilera-Mederos’ attorney, James Colgan, told The Post he intends to appeal the jury’s verdict and that any application for clemency or leniency would have to wait pending that appeal. Among other factors, an application requires input from the Department of Corrections.

Relatives of victims said at Aguilera-Mederos’ sentencing he should serve time for the crimes.

Duane Bailey, the brother of William Bailey, asked the judge to sentence Aguilera-Mederos to at least 20 years, the Post reported. “He made a deliberate and intentional decision that his life was more important than everyone else on the road that day,” Bailey said.

Bailey’s wife, Gage Evans, told The New York Times the driver’s sentence shouldn’t be commuted but that lawmakers should instead examine the sentencing laws.

“This person should spend some time in prison and think about his actions,” Evans said, adding she and other victims’ relatives object to a “public narrative” that Aguilera-Mederos is a victim. “We are truly the victims,” she said.

Aguilera-Mederos wept as he apologized to the victims’ families at his sentencing. He asked for their forgiveness.

“I am not a murderer. I am not a killer. When I look at my charges, we are talking about a murderer, which is not me,” he said. “I have never thought about hurting anybody in my entire life.”