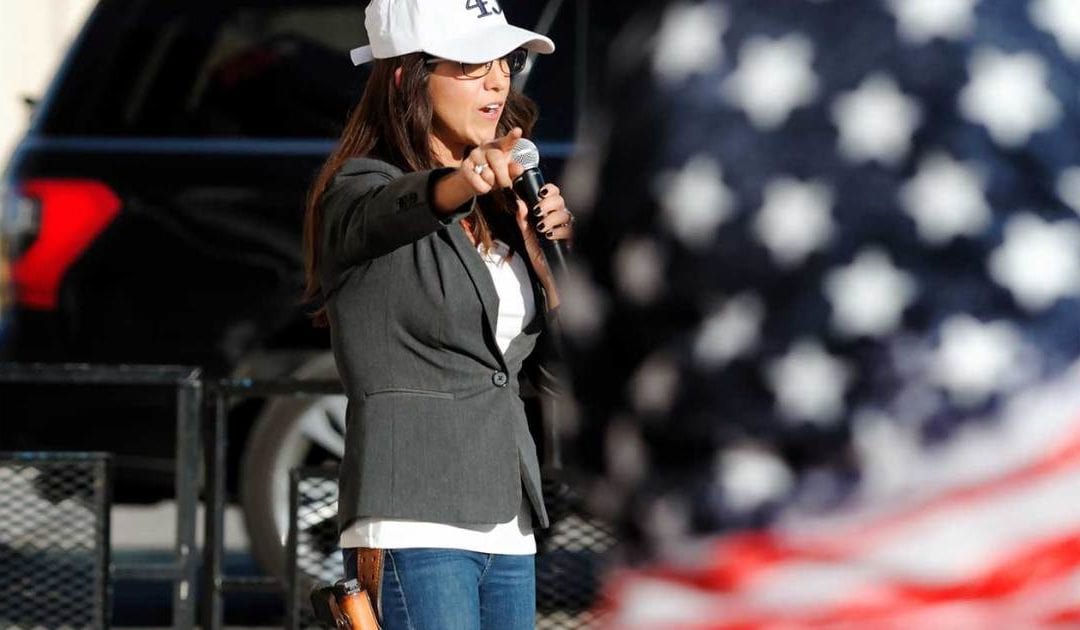 As of 11:12 p.m., Boebert was up 51% to 46% over Mitsch Bush in the massive district, which spans the Western Slope and reaches around to Pueblo.

The candidates were split by about 21,500 votes. The race was still too close to call, but Boebert declared victory nonetheless.

” I am heading to Washington to help secure our rights, drain the swamp and make sure our children never grow up in a socialist nation,” Boebert said in a letter to supporters.

Mitsch Bush’s staffers did not return a request for comment on Tuesday night.

The battle for the open seat is Colorado’s most competitive congressional race this year. Whomever wins will be the first woman to represent the district.

Pueblo is likely to be the deciding factor in the race. Mitsch Bush must win by a large margin in the county in order to make up for the Republican strongholds elsewhere in the district, including Grand Junction.

The race may not be called on election night, however, because Pueblo County Clerk and Recorder Gilbert “Bo” Ortiz says he won’t finish counting ballots until Wednesday at the earliest. Ortiz urged people to be patient.

“We’re going to count them as fast as we can,” Ortiz said. “We’re expecting to be counting votes on Wednesday.”

Ortiz said his office counted ballots after Election Day in both 2016 and 2018 and that it’s not out of the ordinary for the tally to take some time.

Mitsch Bush ran against incumbent U.S. Rep. Scott Tipton for the 3rd District seat in 2018 but fell short by 8 percentage points. She was one of only two Democrats on the ballot in Pueblo two years ago to lose, which dragged down her campaign.

Boebert ousted Tipton — a five-term incumbent — in the primary this year, shocking the political establishment and giving Democrats hope that they could finally win back the district for the first time since U.S. Rep. John Salazar was beaten in 2010.

That competitiveness was reflected in campaign spending. The race broke both candidate fundraising and outside spending records for the district. Mitsch Bush raised $4.2 million to Boebert’s $2.4 million, records show.

Outside groups took major interest in the contest in mid-October, pouring nearly $9 million into the race through Sunday. Republicans spent more than $5 million, most of it opposing Mitsch Bush. Democrats reported spending nearly $4 million, most to oppose Boebert.

Boebert, 33, is anything but a traditional candidate. She openly carries a handgun on her hip and has an arrest record that’s grabbed headlines in recent months. She has also been the focus of national headlines because she didn’t shy away from the QAnon movement during an interview in May.

QAnon is a wide-ranging conspiracy theory that started on the notorious internet forum 4chan and has recently pushed the idea that the coronavirus pandemic is part of a government plot to control the public.

“Everything that I’ve heard of Q, I hope that this is real because it only means that America is getting stronger and better, and people are returning to conservative values,” she said in the May interview.

Boebert has since distanced herself from QAnon, but Democrats have used her remarks earlier this year to paint her as too extreme to be in Congress, despite the fact that the 3rd District leans Republican and definitively backed Trump in 2016.

“When somebody sways one way or the next, I get hesitant,” said Jay Schivitz of Gypsum at a polling place in Eagle where he was dropping off his ballot on Tuesday. He voted for Mitsch Bush.

Boebert isn’t too extreme for Woody Walcher, whose white pickup truck stood out in the parking lot in front of the Mesa County Clerk and Recorder’s office on Tuesday. It sat where anyone driving into the lot could see the three American flags flapping from the pickup bed. Wallace said he had rolled up his Trump flags and tucked them in his tool bin to be in compliance with electioneering rules.

Walcher, a Republican retiree who lives on East Orchard Mesa outside Palisade, was sitting in his truck behind dark tinted windows, partly to fill out his ballot and also to keep a watch out for anyone who might be intimidating voters.

While he kept an eye on the line of voters outside the polling place, the retired businessman blackened a bubble for 3rd District candidate Lauren Boebert of Rifle.

“She is an independent thinker. She is for freedom. She is a business owner,” Walcher said, ticking off her perceived virtues as a candidate. “Her opponent is a politician.”

Walcher is the uncle of Greg Walcher, a conservative Washington, D.C., environmental consultant who unsuccessfully ran to represent the 3rd District in 2004. He also led Colorado’s Department of Natural Resources.

Woody Walcher said he was a big fan of Tipton, but jumped on the Boebert bandwagon after she won the primary.

Once his vote was in, Walcher said he would spend the rest of the day driving around the polling stations to watch out for Black Lives Matter and “Antifa” troublemakers.

“We have word they are going to be causing trouble,” he said.

Mitsch Bush has tried to woo voters by pitching herself as a pragmatic progressive who is independent of partisan politics. But it’s not clear if she can escape Republican efforts to paint her as a mountain town liberal.

Plus, while Boebert has been campaigning in person across the district, Mitsch Bush has only been holding virtual appearances because of the pandemic. It’s not clear how that will play with the district’s voters, who emphasize how important it is for candidates to show up.

“She’s been keeping a low profile,” Erick Javaneau, a Democratic voter in Pueblo, said at a rally for Democrat Joe Biden’s presidential campaign a week and a half before Election Day. “She hasn’t been out in public.”

Robert Preuhs, a professor of political science at Metropolitan State University of Denver, sees the outcome of the 3rd District race as critical to the future of Colorado GOP.

“If the spread in the state is greater than 7 (percentage points) for Biden, and Boebert loses … there will be a strong push by establishment and more moderate Republicans to abandon the conservative and contentious Trump platform and rhetoric,” Preuhs predicted. “But it will be a fight.”