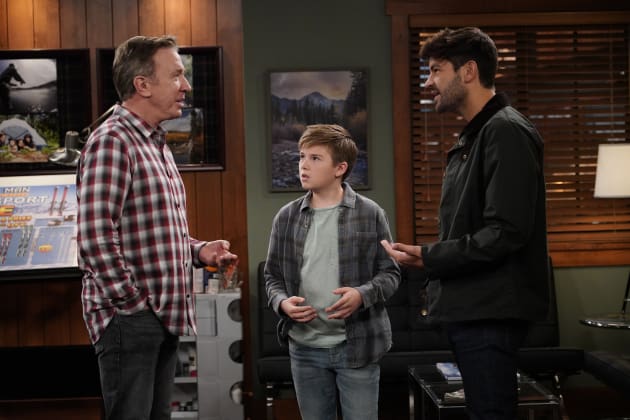 It is no secret that Kristin’s husband and father have different views on life.

Mike and Ryan rarely agree on anything.

But there are two things they both love more than anything in this world, Kristin and Boyd.

Sadly, those are also the two people most affected by Mike and Ryan’s constant arguing.

To be the nice guy in Boyd’s eye’s, both men were actually hurting the teenager, who just wanted to spend time with each of them.

Yes, Mike and Ryan can be in the same room with each other, but their constant banter or bickering can be too much for those around them.

Even though both men went on the road trip, Boyd was the one trying to play peacemaker as they argued about everything. A child should never feel like he or she has to be the mediator between two adults.

Mike and Ryan were not intentionally putting Boyd in the middle. They were just unaware of how their actions made him feel.

Having his bond with is grandfather ripped away from him had a profound effect on Ryan. It is one of the reasons he feels so strongly that Boyd has a good relationship with Mike.

Ryan: Look when you take Boyd for the weekend, it takes me a week to deprogram all the fascist ideas you teach him.
Mike: Well, then why did you want me to go fishing with him?
Ryan: Because you also teach him things that I can’t. Okay. And he thinks you are the greatest. And it drives me crazy.
Mike: I love every single thing you just said.

Ryan’s dad sucked there is no doubt about it. Like so many parents who did not have great role models, Ryan is continually questioning his parenting skills.

He only knows what not to do, so he is always worried he is not doing what is right.

Mike validating Ryan as a parent was a pivotal moment in their relationship. It showed that despite all their differences, Mike does have respect for his son-in-law as a parent.

The moment is significant not only because of Ryan’s upbringing but also remember Ryan left Kristin and Boyd for awhile.

Plus, despite all their differences, I do think Ryan admires Mike. He is the type of father that Ryan wanted as a child.

Watching Ryan and Mike explain to Boyd that the three would always spend time together despite their differences was a great reminder that people can still get along even with different opinions.

Mike: We’re not our dads. You’re not your dad.
Ryan: Yeah, I know that alright. But when it comes to being a father, the only thing I know for certain is what not to do.
Mike: I get it. You should do what I did, just go with your instincts. Follow your instincts. As far as being a parent is concerned, and that is about it, you are pretty spot on.
Ryan: Wow, a rare compliment.
Mike: I thought it would feel bad, but actually I feel like I drank a Slurpee too fast.

It was also a reminder that kids should always be the number one priority. No matter how much an adult disagrees with another adult when a child is involved, the child needs to come first.

I hope Mike and Ryan’s relationship continues to evolve. I like how they are finally starting to connect a little bit.

Although I enjoyed Mike and Ryan’s relationship evolution, I loved Kyle and Mandy playing detective.

Murder mystery podcasts are all the rage these days, so it was fitting that Kyle and Mandy got sucked into one. I mean haven’t we all tried to figure out who did it after listening to one of those podcasts?

Of course, Ed was going to be their prime suspect. Who else would have even been a contender?

Mandy was quick to jump on the Ed bandwagon, mainly after he acted so shady about the photo they found placing him in the area of the murders.

But fans were reminded once again of Kyle’s loyalty to Ed. Not only did he not believe his father figure did it, but he was never going to turn him in.

Kyle is goofy, off-beat and not all there, but he is the most loyal person ever.

Ed finally fessed up and his reason for keeping the photo a secret was awesome. The real home-run was Ed’s reveal that he has a sultry past with Barbra Streisand.

I thought it was brilliant his reason for hiding the photo of them naked while on peyote was to protect her stardom. The ’70s were a wild time, and it was interesting to hear about a young Ed during that time.

Mandy: Here is what we know. The Leadville killer was never found, and Mr. Alzate is the Leadville killer.
Kyle: Woah, we don’t know that.
Mandy: He fits the profile. We can place him in the area of the killings, and he won’t talk about his time there. That evidence is not just circumcisional.
Kyle: So, what are you saying?
Mandy: I am saying, it may be time to go to the police.
Kyle: Oh no! I will drop dead twice before I rat out Mr. A to Johnny Law and that is detective speak for no way.
Mandy: Wait, so you wouldn’t turn Ed in even if he killed all those people?
Kyle: He has been like a father to me. Although, I did turn my father in. But he was like a stranger to me.

It is no secret I am a big fan of Mike’s vlog. He never disappoints with his words of wisdom. His current one was all about kids, putting them first, doing what is best for them and coming together for the sake of the kids.

His sentiment is one with which I wholeheartedly agree, especially in today’s world. Mike always manages to deliver a message that hits close to home with a little humor, and I for one look forward to it each week.

Last Man Standing fanatics now it is your turn.

What did you think of Ryan’s story about his grandfather?

How funny were Kyle and Mandy as detectives?

Remember you can watch Last Man Standing online any time you want!