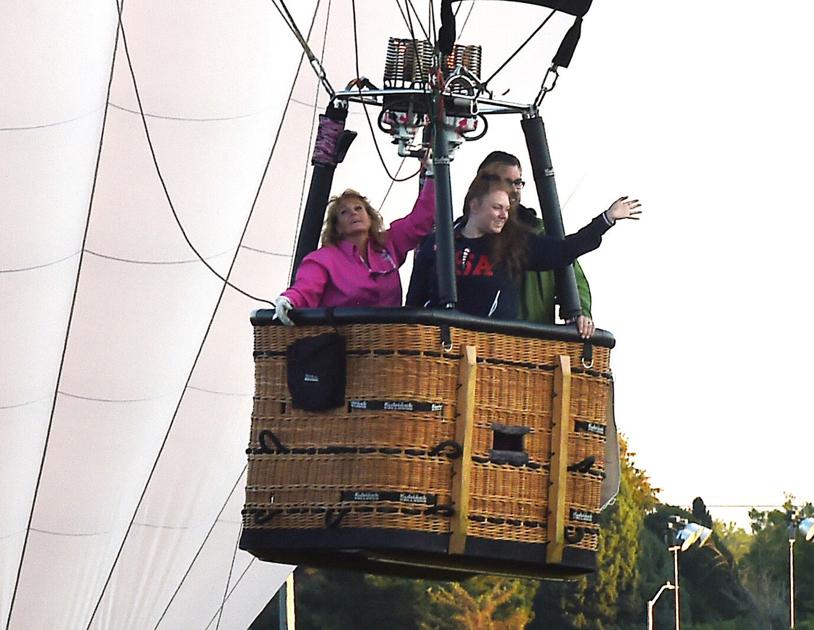 Catching a lift in a hot air balloon on Labor Day was “much more frightening” for blind judo athlete Liana Mutia than competing for Team USA in the Tokyo Paralympics last month.

“I’m all about new experiences,” the 22-year-old Colorado Springs resident said before hopping in a balloon gondola, or basket, Monday at Memorial Park.

She set aside her fear of heights for a quiet trip over the yawning city.

Like the Paralympics, Mutia’s ride was “overwhelming and exhilarating all at once,” she said.

The sun rose in tandem with a record 78 balloons that participated in the 45th annual Labor Day Lift Off.

After last year’s truncated event due to the COVID pandemic, the return of the tradition drew some 25,000 people each morning of the long weekend and about 50,000 to the evening balloon glow, organizers estimated.

“I’ve never seen anything like it before,” marveled Laura Aguilar, who lives near Denver. She and her family woke up at 4 a.m. to arrive in the dark to, for the first time, watch the action.

“It’s worth it,” she said, gazing at the sky, where bright shapes appeared parked at times in the calm air.

Monday’s weather was perfect, said pilot Tom Steinbock of Crestwood, Ky. His company, Cartoon Hot Air Balloons, travels around the nation to entertain the crowds with giant balloons in the shape of a yellow bird and a tom cat named Puddy.

“This has been one of absolutely best events of the year,” he said. “The people, the crowds are great, the mountains in the background. … I think this is even better than Albuquerque.”

Colorado Springs weather cooperated all three days this year, enabling balloons to take off and dip their baskets in nearby Prospect Lake before racing away.

But on Monday, they rose majestically over the eastern plains just for fun.

“It’s just as amazing today,” she said. “It’s thrilling to watch them inflate and take off. I also like hearing all the information about hot air balloons.”

Things like how hot air forced into the opening makes the balloon rise, and when the air inside cools, they return to Earth. They’re also federally registered aircraft and must follow strict regulations for safety in the air and on the ground.

Mutia was one of 10 Olympians who ascended in a balloon on Monday, which was dubbed Military Appreciation Day and Welcome Home Olympians Day.

Colorado Springs Mayor John Suthers told the crowd that 295 United States Olympians and Paralympians who competed in the Tokyo Games have lived in Colorado Springs while they train, and some are permanent residents.

“This is a tradition that is part of the DNA of our city,” he said of the balloon festival.

Track cycling gold medalist Jennifer Valente signed autographs for a long line of fans. A University of Colorado at Colorado Springs student, Valente said she attended the festival once before.

“It was a blast,” she said, adding that she appreciated the city “doing something special for the Olympians” at this year’s event.