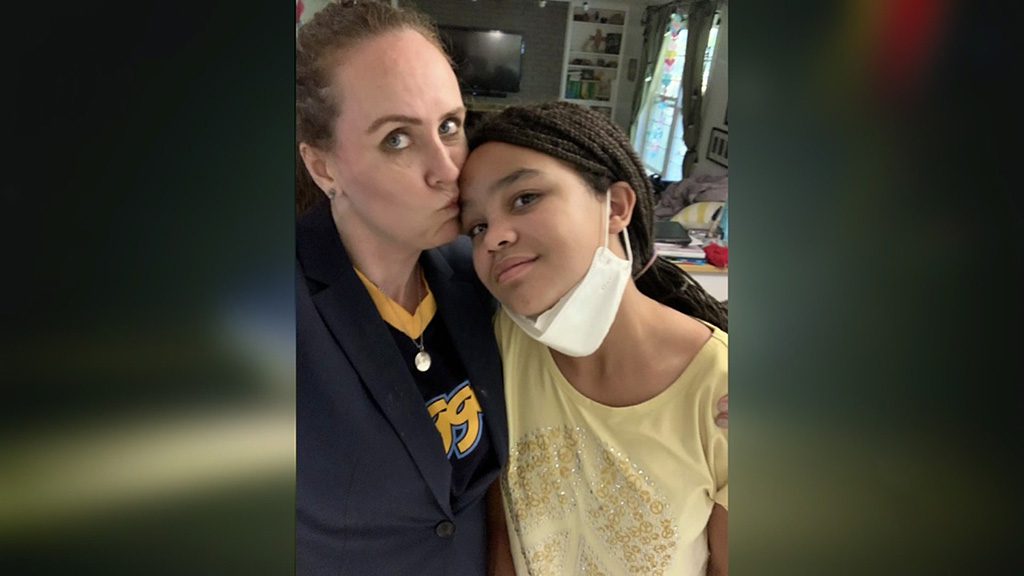 SAN JOSE (KPIX) — A Los Angeles mother claims she was stopped and questioned for human trafficking after boarding a Southwest Airlines flight with her biracial daughter and now she’s demanding the airline be held accountable for what she describes as racial profiling and racial harassment.

“We would not have been reported for anything if my daughter were white and blond,” said Mary MacCarthy.

The Los Angeles resident and single mother said she booked a Southwest Airlines flight with her 10-year-old daughter, Moira, after getting word her brother had suddenly passed away last month. She was headed to Denver, Colorado with a layover in San Jose on October 22.

MacCarthy said as soon as they landed in Denver they were surrounded by two police officers and a Southwest Airlines employee.

“They tried to speak individually to my daughter, I said, ‘No, she’s only 10, you’re not questioning her by herself,’” MacCarthy said. “I took out my phone and started recording.”

In the video, she explains she is using her phone to document their names because she’s too nervous to write it down. Her daughter, who does not appear in the video, can be heard sobbing in the background.

“The flight attendants were just concerned about the behavior when you boarded the aircraft,” the Southwest Airlines crew member tells MacCarthy.

MacCarthy told KPIX that because she had booked their tickets last-minute, they were part of the last group to board. Southwest Airlines does not have assigned seating. She said she asked flight attendants if they could help her get two seats together so she could be next to her daughter.

But when they told her they wouldn’t be able to help, MacCarthy said she asked passengers if they wouldn’t mind moving for her and Moira. She said several passengers were understanding and moved seats.

MacCarthy said the flight was uneventful until she and her daughter got off the plane and hit the jet bridge where the officers and crew member were already waiting for them.

After explaining that Moira was her daughter and that they were in Colorado for her brother’s funeral, MacCarthy said the group let her go without asking any other questions.

“I was absolutely certain that we had been racially profiled but I have other things to worry about, I didn’t give it too much thought beyond that until 10 days later,” she said.

Several days ago, MacCarthy said she received a call from the human trafficking unit of the Denver police department.

“Telling me she was calling up on the suspicions that I am a human trafficker,” she said. “They saw a white mother, they saw a child with a different skin tone and said that’s suspicious, that could be a crime and we’re reporting that. That’s not OK. This is the United States of America in 2021.”

What’s more, MacCarthy said she asked what was in the police report, which KPIX obtained. According to the report, flight attendants said MacCarthy and her daughter did not speak to each other during the flight and that the mother didn’t allow Moira to talk to the flight crew. Both claims, MacCarthy said, are completely false.

Police also wrote in the report that MacCarthy told them about her brother’s funeral, that Moira was her daughter and appeared tall for her age.

Police reported that the girl started to speak but then stopped and that MacCarthy “did not want to give any information.”

MacCarthy said her cellphone video, however, tells the truth. In the recording, she can be heard telling officers and the airline employee that she works in tech and lives in Los Angeles.

“I’m glad I did because it turns out that the truth recorded on my video is different than what they put into their official report,” MacCarthy said. “I want them to be accountable for what is a clear, egregious case of racial profiling and racial harassment of myself and of a grieving 10-year-old African American girl.”

KPIX reached out to Denver police and are still waiting to hear back.

Southwest Airlines released a statement to KPIX that says:

“We were disheartened to learn of this mother’s account when traveling with her daughter. We are conducting a review of the situation internally and we will be reaching out to the Customer to address her concerns and offer our apologies for her experience traveling with us. Our Employees undergo robust training on Human Trafficking. Above all, Southwest Airlines prides itself on providing a welcoming and inclusive environment for the millions of Customers who travel with us each year.”