Knights on Ice — So Did the VGK Look Past Arizona or Was This a Case of a Colorado Letdown? You Tell Me – Vegas with an Edge 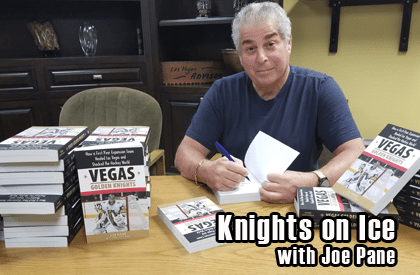 I’m not really sure if the VGK mailed this one in last night against Arizona or if it was a pure case of emotional letdown following a critical and emotional win against Colorado at T-Mobile on Wednesday. There was no miracle 3rd period comeback that we have gotten used to. As a matter of fact, not even a goal was scored by the best team in the league based on their record (35-12-2), who were shutout 3-0 by their new goaltending nemesis. In his last 2 games against Vegas, Adin Hill has given up just 1 goal.

Coming into last night’s game, Arizona had lost 4 of their last 5 games and 9 of the previous 11. As you know, the VGK were flying high with their 10-game winning streak and fell one game short of establishing yet another NHL record. No team in the history of the NHL has ever won 12 games in consecutive months. Vegas was 12-5 in March and was 11-3-1 coming into last night’s game, which they were supposed to win. Especially with their +60-goal differential, as compared to Arizona’s -23 goal.

Not to mention their 3rd period dominance. In the previous 9 games, Vegas has outscored the opposition 14-1. The last team to score a goal in the 3rd period against the VGK was Anaheim on April 24; the other 8 games Vegas shut the opposition out. So entering the 3rd period trailing 1-0 was not a big “Hill” to climb—except Adin Hill was in the net and he’s been spectacular against the VGK. His overall record this season is so- so at 8-8, but against Vegas, he’s in the zone.

At the other end of the ice was Robin Lehner (12-2). Robin’s only 2 losses of the season have come against Arizona. His other loss was back on Jan. 22 when he gave up 4 goals. Last night the 2 he gave up came off rebounds. The first of the game came off a turnover by Pietrangelo, who was weak on his clearing attempt with the puck as he was being pressured. It was picked off by Lane Pederson, who sent it out into the slot. Lehner made the initial save, but John Hayden picked up the fortuitous rebound and got it past Lehner for the only goal Arizona was going to need. It was Hayden’s 2nd goal of the season. Arizona scored their 2nd goal in the 3rd period and it also came off a rebound that Lehner failed to control.

On a normal night, giving up 2 goals is not that big of a problem, as Vegas has been filling the net scoring 5 goals in their last 3 games and 37 in their last 8. But the Top Guns of Vegas were grounded last night, especially the top line of Stone, Stephenson, and Pacioretty, which combined for only 2 SOG, both by Pacioretty. Stone and Stephenson registered zero SOG.

Robin Lehner got zero support, which made those 2 juicy rebounds even more disheartening. Arizona added an empty-net goal after Lehner was pulled for the extra skater with 2:55 left on the clock. It only took Arizona 18 seconds to put the 3rd goal in after Pacioretty shot the puck wide of the net, causing it to leave the zone. Then Shea Theodore was weak with a stick check, which allowed Arizona possession of the loose puck.

With the shutout, both Pacioretty and Shea Theodore’s scoring streaks were snapped. Jonathan Marchessault was a late scratch and once again Vegas played with a makeshift lineup of just 11 forwards and 6 defensemen.

I’m not encouraging you or promoting gambling, but if you happen to be in a sports book sometime before 7 p.m. today, you should consider betting on the VGK. They’re not losing 2 in a row to this team, especially since every one of the players and coaching staff knows they mailed this one in.

I didn’t forget to list the 3 stars of the game, but no one deserves a star from last night’s performance.

Next game is today against Arizona at 7 p.m. at Gila River Arena.

If you want to hear and see more VGK content please check out the podcast I do with Eddie Rivkin on YouTube. It’s called

One other note: If you’re reading this blog from Facebook or Twitter and would like to access it earlier in the morning before I share it on social media, it’s usually published by 8 a.m. the morning after a game on LasVegasAdvisor.com. What better way is there to enjoy your morning coffee than reading my take on last night’s VGK game.