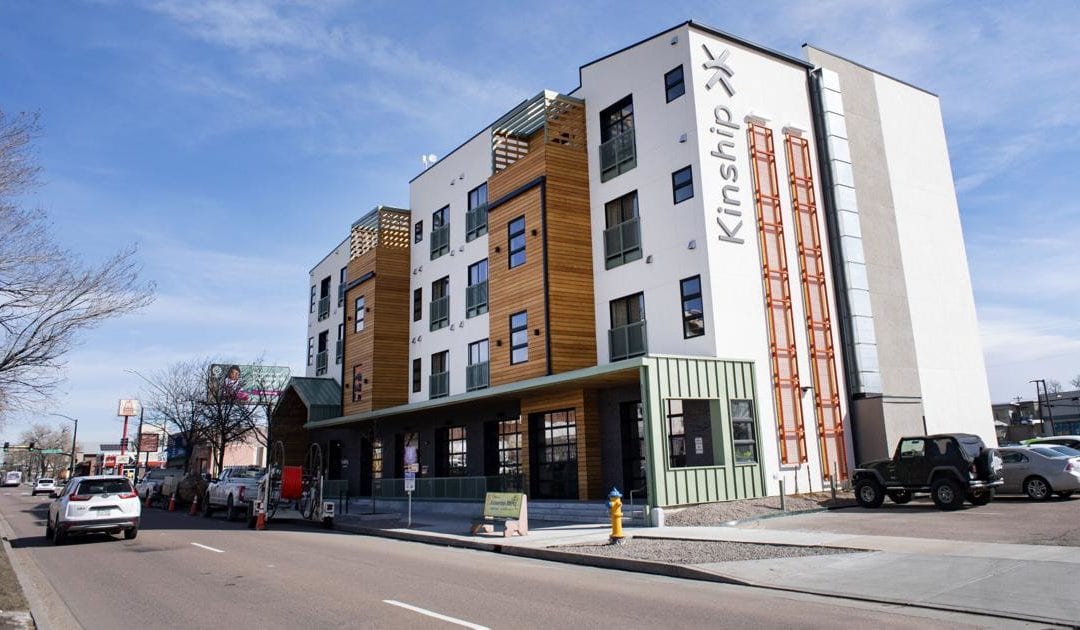 The first of three downtown Colorado Springs hotels built during the COVID-19 pandemic formally opens Wednesday with high hopes that restrictions that have hobbled the tourism industry will soon be history.

Kinship Landing, 415 S. Nevada Ave., opened its guest rooms in January with little fanfare but will host an invitation-only grand opening Wednesday and also unveil its just-opened Homa Café and Bar, operated by Pizzeria Rustica and TAPATeria owner Jay Gust, and its Greenhaus event space and other amenities for guests and locals. The 80-bed boutique hotel is designed to provide a place for area residents and out-of-town travelers to come together for outdoor recreation and exploring the community.

“We are aiming to offer everything you need and nothing you don’t need — we want people to feel like they are at home,” said Lindsay Pertsov, Kinship Landing’s assistant general manager. “We are excited to show the community what Kinship Landing is and what our core values — community, trust, generosity, adventure and courage — are all about.”

The four-story hotel had been under construction since breaking ground in early 2019, but the pandemic and related “supply-chain issues” delayed completion until earlier this year.

The grand opening was delayed to avoid attracting large crowds while El Paso County still remained under a high level of pandemic-related restrictions on hotels, restaurants and other businesses that have since been relaxed as local COVID cases declined.

“It has definitely been a long journey — four years of love and frustration for the founders — but we couldn’t be happier to be fully open,” Pertsov said. “Bookings started slow but have been steadily growing. We are already booking rooms for summer and have some bookings for as far out as September and October. I would say our bookings are performing a little bit better than expected, especially given the pandemic and that we opened during a historically slow time of year.”

Kinship Landing features 27 private rooms, seven suites and six bunk rooms as well as a large outdoor patio, a kitchen near the bunk rooms and a concierge station.

Perhaps the most unique part of Kinship Landing its “Camp Deck,” a fourth floor west-facing outdoor deck where up to six guests can sleep for $20 per person per night that Pertsov describes as “something totally different, unexpected and a lot of fun.”

Two other downtown hotels now under construction are expected to open in the year:

• A 120-room, seven-story Hyatt Place hotel that is scheduled to open in September at 201 E. Kiowa St. with a restaurant, lounge, indoor pool, fitness center, hot tub and meeting space for about 80 people. Avik Amin, managing partner of Pueblo-based AAA Hotel Developers, said exterior structural work is complete and interior work began in the past month or so. AAA will begin hiring 30-35 staff members in about three months.

The company, which also owns two hotels each in the Denver and Pueblo areas and one each in La Junta and Lamar, also is building a 63-room Holiday Inn Express hotel at 114 Manitou Ave. in Manitou Springs that is scheduled to open by early December with at staff of about 20 people. The two hotels have a combined cost of $29 million.

“We see good things happening downtown with the Olympic Museum, the new stadium and arena. The arrival of Southwest Airlines (on Thursday) also should help by giving people more options to fly to the city,” Amin said. “We are expecting this summer (tourism) season to be a lot better than last summer, which should help both hotels when they open.”

• A 261-room hotel split between Marriott’s Element and SpringHill Suites brands is scheduled to open at 402 S. Tejon St. on March 1, 2022. Exterior framing work is nearly complete with the exterior panels and windows are to be installed next, said Jim DiBiase, a partner in the $89 million project that also will include a rooftop restaurant, bar, meeting space and patio as well as a ground-floor restaurant, two breakfast bars, more meeting space and an outdoor courtyard. The hotels will have a staff of about 200.

“We slowed construction during the pandemic because we don’t expect business travel to recover until the first or second quarter of next year. It will start creeping back this year but we expect companies to return slowly to business travel,” DiBiase said. “I expect this summer tourism season will be even stronger than last season, which was one of the best in the nation though still down sharply from the previous year.”