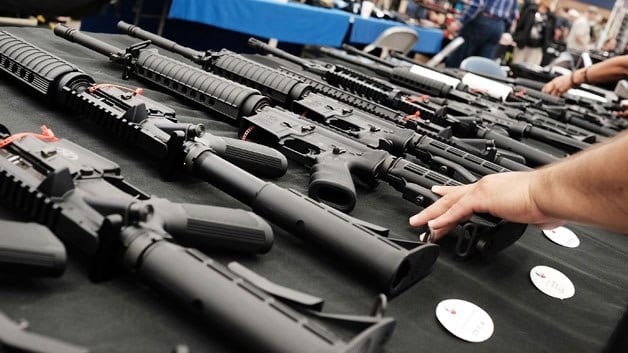 BOSTON (CBS) — “We face a pandemic of coronavirus,” said Sen. Dick Durbin (D-Illinois) in Tuesday’s Senate hearing on several long-stalled pieces of gun control legislation. “We have another epidemic in America called guns.”

At issue in the Judiciary Committee session were two bills passed earlier this year by the House, one closing the so-called “gun show loophole” which allows unregulated private sale of otherwise monitored weapons, another that severely restricts the amount of time authorities have to review background checks on gun buyers. And not for the first time, these measures were being debated in the shadow of horrific gun violence, in this case the slaughters in Boulder and Atlanta.

President Biden said as the hearing began: “This is not and should not be a partisan issue.”

But it is, with the occasional Democrat joining republicans in balking at an assault weapons ban and other restrictions in the past. And despite the high-profile carnage in Colorado and Georgia, the same old arguments are being rehashed.

“That’s not true at all,” argues John Rosenthal, the founder of Stop Handgun Violence and the man behind the huge billboard over the Mass. Turnpike extension that logged gun-related deaths nationwide for years. “We just happen to arm [the mentally ill] with military-style weapons that police don’t even carry.”

Rosenthal says it’s naïve to think that the latest horror shows will break the gun control gridlock. “It didn’t change after 558 people were shot in a matter of minutes in Las Vegas,” he says. “It didn’t change after 20 babies were shot at Sandy Hook. Because members of Congress are more concerned about their blood money campaign contributions then they are about yours and mine and our families’ safety from preventable gun violence.”

Opponents of these measures argue there are already plenty of gun control laws on the books that just go unenforced, and that what the Democrats really want is to gut Second Amendment rights. And despite opinion polls showing large majorities in support of tighter controls, there is no sign of weakening among the opposition.

Which leaves Rosenthal, when asked to offer a positive note, to respond with silence – and a deep sigh.