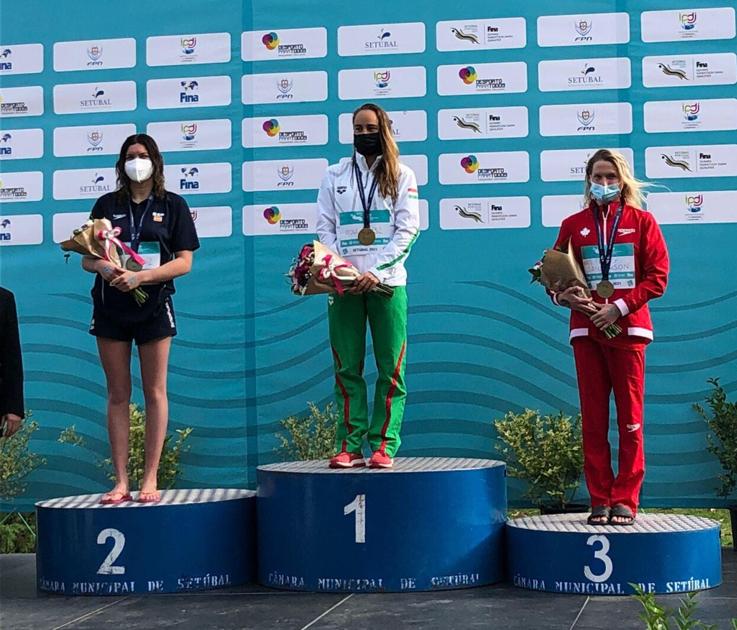 When Kate Sanderson got out of the water after qualifying for the Olympic women’s 10K marathon swimming, she made three phone calls.

With water still dripping off her body, Sanderson dialed her mom, her dad, and then, Mike Doane, her coach from her time in Colorado Springs.

The two trained together when Sanderson attended high school at Cheyenne Mountain, and then again when COVID-19 prevented her from training for the Olympics in Canada, where she resides. She is eligible to compete for Canada since a bunch of her family is from there.

For Doane, seeing Sanderson’s name pop up on his screen was a pleasant surprise, but for Sanderson, he was always third in line for a phone call.

“Mike is like my second dad,” Sanderson said. “I honestly feel like he’s my best friend. He coached me when I was 14 until I left for university at 18. I still talk to him weekly. He is a huge person in my life.”

Swimming has taken Sanderson all over the world — most recently to Portugal where she qualified for Tokyo — but it started in a back yard, simply as a way to satisfy cautious parents.

“I first got into swimming, just for water safety,” she said. “We had a backyard pool and my parents wanted me to be safe around the water.”

Then, Sanderson and her two siblings (an older brother and a younger sister) joined local swim teams in order to stay active and busy.

Sanderson loved everything about swimming. From team dinners and road trips with her mom, to intense training in the pool. But it wasn’t until she made her first national team that Sanderson realized she was more than just a good swimmer. She had potential to do something bigger.

“That was a big change for me,” she said. “I realized if I was serious about this, I could go far.”

Just like Sanderson came into competitive swimming by accident, she also didn’t seek out the event that ended up being her ticket to Tokyo.

Doane said he was always impressed by her intensity and ability to push herself in training. Sanderson always seemed able to swim longer and harder than the other athletes in the pool, and eventually other people in the swimming world took notice as well.

Doane and Sanderson went to Canada in 2018 to qualify for the national team doing 1,500 meters. Sanderson qualified, and was approached about joining the open water team.

The conversation was simple.

“Had she ever done open water swimming?”

And a month later, Sanderson was in Spain attending a junior team camp.

“I just kept going from there,” she said. “There was always another competition, another meet to qualify for, so I kind of just fell into it. It was never my plan, it just kind of happened. And I realized I could make the Olympics doing it, so I knew I should try.”

Open water, or marathon swimming, as it is dubbed for the Olympic Games, is plenty different from the pool generally associated with competitive swimming.

A pool never changes, but the open water never stops changing, from the temperature of the water, to encounters with sea life, swimmers like Sanderson have to be ready for anything.

“Everything is uncontrollable,” she said. “There are so many factors and so many things going on that you have to respond to.”

In a way, the 21-year-old was made for this kind of uncertain environment.

Sanderson spent her childhood living all over the world, constantly meeting new people and being thrown into different cultures. Her father worked for a French water company that took his family to various places, from Indiana to Abu Dhabi and Qatar.

Sanderson is grateful for her upbringing, as she got to travel, experience diversity and create friendships across the world. But for an avid swimmer, the constant changes made things difficult.

“It wasn’t always easy to find teams, but my parents went out of their way for me,” she said. “They would drive me an hour or two just for practices. I was really lucky.”

Eventually, the family decided to settle down and find some stability. That’s when Sanderson came to Colorado Springs, where she spent all four years of high school.

And though she lives in and represents Canada now, Sanderson isn’t shy about claiming Colorado as her favorite place.

“Colorado has become my home in many ways,” she said. “I have family there still, and I love the people and the community.”

So when Sanderson hits the water Tuesday, she may be competing under the Canadian flag, but she’s swimming for Colorado, too.