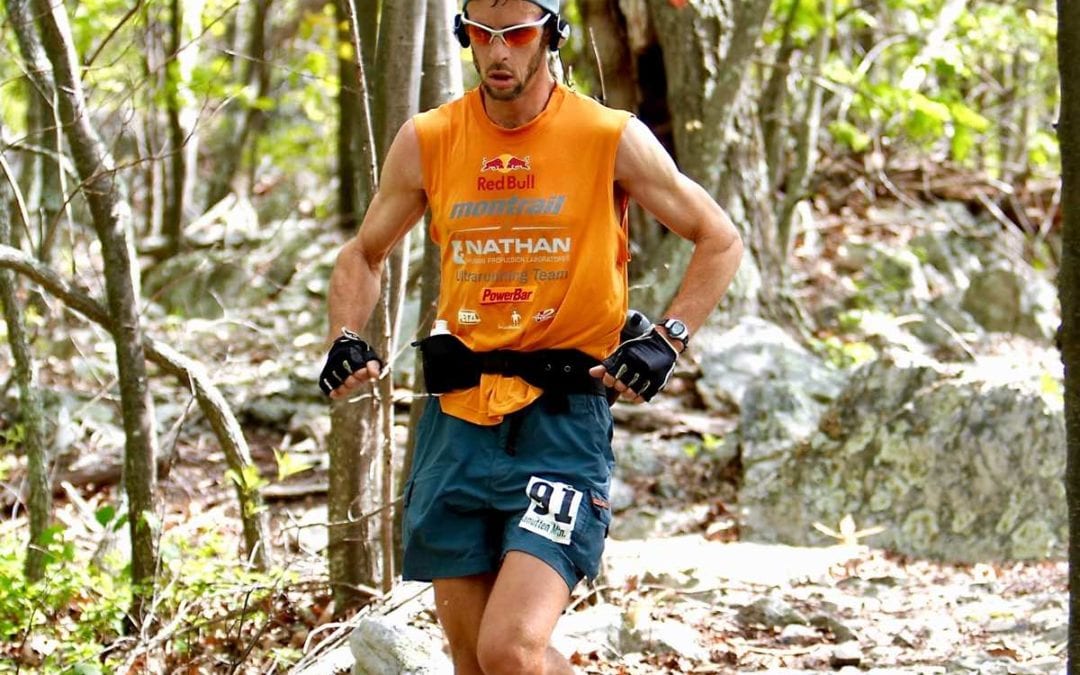 In 2006, Karl Meltzer ran 10 ultramarathons, among them eight 100 milers and six wins. He was actually on his way to winning his seventh at the Chimera 100 Mile when severe weather caused a mid-race cancellation. In late December of that year, Karl was named UltraRunning Magazine’s (North American) Ultrarunner of the Year.

Karl began his 2006 season early at the HURT 100 Mile in Hawaii. At the pre-race briefing, legendary Hawaiian ultrarunner Akabill Molmen challenged the field when he said, “I don’t think anyone will ever break 24 hours here. In fact, I’ll give $1,000 to anyone who does.” That was clearly all the incentive Meltzer needed and he went on to win HURT in a then-course-record time of 22:16. After the race, true to his word, Akabill presented Karl with $1,000 in cash.

After a few easy months and a mediocre (by his standards) 17th place finish at the American River 50 Mile, Karl traveled east for the notoriously rocky Massanutten Mountain Trail 100 Mile. In what he would eventually say was one of his two best races of that season, Karl ran a blazing-fast time of 17:58 and finished second to a virtually unknown (at least in the United States) South Korean runner named Sim Jae-Duk.

“He just hammered the whole way, ” Meltzer recalls. “It was a style of racing I hadn’t seen before. We were pretty even on the rocks but he smoked me on the roads.” To this day, Jae-Duk and Meltzer have the first- and second-fastest times ever run at MMT and are the only two runners to have run under 18 hours.

Two months later, Karl won his fourth Hardrock 100 in four attempts in an excellent time of 27:07. He recalls running with a group for about the first 40 miles and then steadily pulling away. “By that time, I had Hardrock pretty much dialed,” he remarked.

Karl traveled to the Leadville Trail 100 Mile in August and had his most disappointing finish of the year, taking seventh when he ultimately had to walk the last 13 miles after succumbing to blisters on both feet for the first time in his life. His memory of the race, however, was not all negative, as he laughed about descending off of Hope Pass and encountering the then-unknown Anton Krupicka, “I said to the guys I was running with, ‘Who the hell is the naked guy. He looks like he’s going to totally blow up.’” Of course, Krupicka instead won the race and the rest is, as they say, history.

After recovering from Leadville, Karl launched into what, to me, was one of the most extraordinary two months of ultrarunning ever with dominating wins at the Wasatch Front 100 Mile, The Bear 100 Mile, the San Diego 100 Mile, and the Javelina Jundred.

Originally, he hadn’t even intended to run Javelina but a challenge from then Grand Slam record holder Joe Kulak convinced him to sign up. “Kulak said he’d buy me a six pack if I broke his [then] record. So I did.” Meltzer also set a course record at San Diego, running 15:48. This record still stands.

Looking back on that season now, 13 years later, Meltzer made several observations. First, he said he never did any training runs longer than about 15 miles. Mostly he just ran on feel and went from event to event. Additionally, while he worked hard on his climbing, often hammering 2,000- to 3,000-foot ascents, he kept his training steady. “I knew I just needed to keep it even keel. I knew the fitness was there.” Finally, Karl felt like he had momentum on his side and he wanted to take advantage of it, “You just never know what might happen, so I just kept it going.”

In the end, Karl still smirks a bit reflecting back on the Ultrarunner of the Year voting that year, “Hell, I only won the thing by two votes. I knew if I didn’t win that it was total bullshit.”

Karl Meltzer’s Beer of the Week

This week’s Beer of the Week has to come from the Speedgoat himself:

“My favorite brew would have to be Natty Light. It’s a smooth, refreshing beer… as long as it’s cold. What makes Natty Light so great? It’s about as light at Utah’s powder. Natty Light in Utah is 3.2[% alcohol by weight], so I’m able to drink more of them.”

Do you have memories from Karl Meltzer’s 2006 of racing? Did you race with him at an event or spectate a race at which he was running? Leave a comment to share a memory.