Kanye West Met With Jared Kushner In Colorado, Reportedly Has 2% Of Black Vote 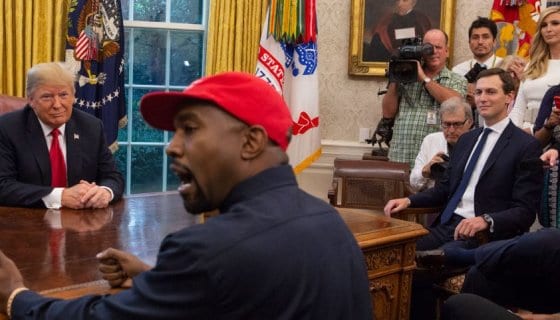 is on the wrong side of history. The outspoken yet whole underinformed multihyphenate with classic Hip-Hop albums under his belt reportedly met with Donald Trump emissary Jared Kushner.

At face value this would be perplexing considering Kanye West is running for President of the United States, which is ridiculously unlikely of ever occurring. However, Yeezy has already gone on the record to say that he is campaigning in order to hurt the prospects of presumptive Democratic candidate Joe Biden, who just tapped Sen. Kamala Harris to be his running mate.

The New York Times reports that Kushner, a senior advisor in the Trump administration, met with West privately in Colorado while he was in town with his wife, Ivanka Trump. West was reportedly camping in Colorado with his family, but source says Kim Kardashian did not accompany him to the meeting.

West dropped dime about the meeting on Tuesday (August 11) via Twitter, of course. “I’m willing to do a live interview with the New York Time about my meeting with Jared where we discussed Dr Claude Anderson’s book Powernomics,” he tweeted last night.

No word on what they discussed, but we’re going to guess it was about helping a racist and sexist President somehow get a second term despite 165,000 plus deaths via COVID-19, a wrecked economy and general mayhem hanging on his neck. Just saying.

As for the West 2020 Vision campaign, he’s been struggling getting his names on ballots. Recently, he was rejected from the Illinois ballot because of thousands of suspect signatures. Also, a recent Politico poll has Kanye West securing just 2% of the Black vote.