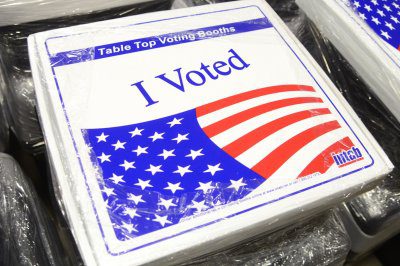 Oct. 14 (UPI) — A Colorado judge on Wednesday ruled that Mesa County’s top election official who made baseless claims that the 2020 presidential election was stolen cannot oversee November’s election after allowing an unauthorized person access to the voting machines.

District Court Judge Valerie Robison ruled in favor of Colorado’s Secretary of State Jena Griswold who had asked the court to prohibit Tina Peters, Mesa County clerk and recorder, and her deputy clerk, Belinda Knisley, from overseeing the upcoming election for threatening the integrity of their elections.

“Clerk Peters seriously compromised the security of Mesa County’s voting system,” Griswold said in a statement on Wednesday. “The court’s decision today bars Peters from further threatening the integrity of Mesa’s election and ensures Mesa County residents have the secure and accessible election they deserve.”

In her 22-page ruling, Robison wrote that the plaintiffs had showed that both Peters and Knisley had committed breach and neglect of duty and other wrongful acts.

According to the court document, Peters was “untruthful” when she listed a man named Gerald Wood as an administrative assistant, giving him access without conducting a background check to Dominion Voting Systems machines, which were scheduled to be updated on May 25.

Days prior to the update known as a so-called trusted build was to begin, Wood, who was provided with an access card to the secured election system areas, copied the hard drives of the voting equipment computers, Robison wrote.

During the trusted build, confidential passwords were posted online, prompting State Department officials to conduct an investigation and they found two settings in the voting machines that were incorrect, resulting in enabling security vulnerabilities, Robison wrote.

Concerning Knisley, Robison said she disabled cameras in the Election Department without basis from May 17 to Aug. 1.

“Peters failed to follow the rules and orders of the secretary by facilitating and allowing a non-employee (Gerald Wood) without a disclosed background check to have access to a secured area via a Mesa County access card. Knisley aided Peters in her wrongful acts by requesting that the cameras be disabled,” Robison said. “In doing so, Knisley ensured that the wrongful behavior of Peters could not be viewed.”

Robison ruled that former Secretary of State Wayne Williams take over as head official for the Nov. 2 elections and that Sheila Reiner serve as the Mesa County Elections supervisor.

“If this decision stands, it will fundamentally shift the power of running local elections from the county clerk to a secretary of state in Denver, eroding the checks and balances that make our elections fair,” she said. “I intend to appeal this decision, and am hopeful the Colorado Supreme Court will restore control of local elections to locally elected officials.”

Colorado Attorney General Phil Weiser said in a statement that he was “grateful” to the court for its decision.

“The freedom to vote is one of the most sacred rights we have as Americans,” he said. “Today’s ruling gives the voters in Mesa County the reassurance they need that the upcoming election will be free and fair, and administered in a manner that they and all Coloradans can trust.”