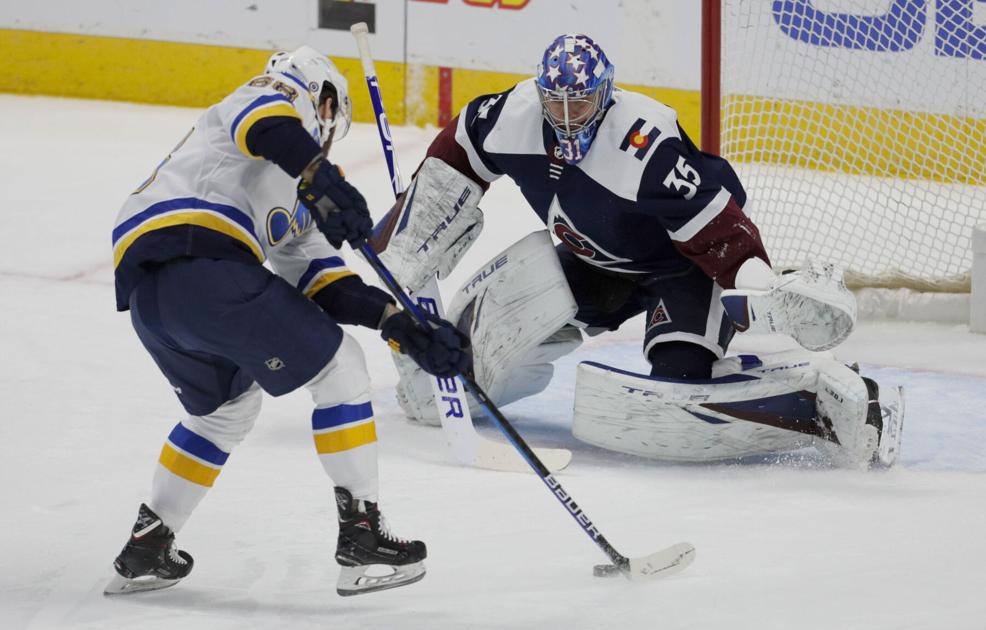 DENVER — It had been a little while since Nathan MacKinnon took over a game.

After making the internet rounds the past two days for a helmet throw that triggered a $5,000 league fine, MacKinnon let his finesse dominate the conversation. He scored twice and backup goaltender Jonas Johansson propped up a one-goal lead for his first win in a Colorado sweater, 3-2 over the St. Louis Blues.

In one fluid motion, MacKinnon did a full spin through the crease and flipped the puck over Jordan Binnington’s glove to make it 2-1. He then dragged Blues defender Marco Scandella behind him as he got a quick shot off, scoring for insurance in the second period.

His latter goal was needed as Colorado protected the 3-2 lead the entire third period. A late penalty kill sealed the victory on Friday night at Ball Arena.

“I thought we had a bit of a slow start,” MacKinnon said.

“We held the lead throughout the game, which was important.”

Even if it was slow by team standards, Colorado scored two power-play goals in the first period. Brandon Saad tapped it through the crease to Nazem Kadri and the puck wound up glancing off the bottom of the goalpost. Saad retrieved it and scored.

In both of his starts with the Avalanche, the first shot on Johansson has gotten by him. He steadied Friday night and made 11 saves in the first 20 minutes, including on Mike Hoffman on a clear breakaway.

“That, mentally, is not easy,” coach Jared Bednar said. “But I thought he came up huge.”

During a late-second-period power play, the Avalanche took two penalties. St. Louis’ David Perron scored during the 4-on-3 portion of the special teams stretch.

Bednar called the third period “significantly better” third than the first two, even though Colorado did not build on its lead. The penalty kill went 4-for-5 and turned in a pivotal kill with just under five minutes left in the game.

Johansson, who was acquired March 20 in a trade to back up and rest Philipp Grubauer, made 25 saves. His first and previously only NHL victory came Feb. 23, 2020 with Buffalo.

“Great feeling,” Johansson said. “Big points for us, and personally, it was really fun to get the first one in the Avs jersey. Just good things.”

The Avalanche, sitting at the top of the West Division after securing a standings point in 13 straight games, distanced themselves from the Blues in fourth.